Changing perspective is an essential step in any process of knowledge and understanding. When we look from a different perspective we can see things in a new way, understand them better, comprehend them deeply. A new point of view pushes us, unblocks us and clears our minds because it shows us the hidden aspects, the bright sides of a problem or, on the contrary, the shades of an apparent idyll.

Such shift in awareness is something that, besides being experienced relatively consciously by all of us every day, has been described with a specific name – overview effect. The term was coined by author Frank White after that many astronauts experienced a psychological shift following a total change of perspective – seeing the Earth from space in this case – that allowed them to grow a new awareness on the role of humans in the world and on what it means to be alive.

I became completely obsessed with this idea. It kind of changed the way I thought about everything. Benjamin Grant, author and creator of Daily Overview

This concept gave life to Daily Overview, the photographic project of Benjamin Grant that every day presents us a new image of the world exactly from that point of view, from above. The protagonists are the majesty of nature and the impact of humans on it that, thanks to the perspective, create shapes, patterns, drawings that leave us in awe. The aim is in fact inspiring awe and at the same time helping us understand the interconnections between all forms of life, and encouraging us to protect the Planet on which we’re simple guests.

The project has also become a book, titled Overview: a new perspective of Earth, which is a journey into different aspects of our life that have an impact on the Planet, each of which represents a chapter of the book: from where we extract, where we produce energy, where we live, to where we are not. Every image is completed with its geographical position in the world, and a description that makes us better understand the story we get to see with each overview. We speak to Benjamin Grant, who tells us about his work, his images and how he has been, before we have, fascinated by the overview effect.

Why have you started to create images from above?
It all started in 2013 while I was working at a consulting firm and I started a space club to get people to talk about the outer space. In preparing it, I typed in the word Earth in a mapping programme and by mistake it went to Earth, Texas, which was a small town in the middle of nowhere that I have never heard of before. What appeared on my screen were these incredibly beautiful circles that result from a type of irrigation system. And the image got me fascinated. What made me type that word was the overview effect, about which I learned from a film that one of my collegues in the space club shared with me. I became completely obsessed with this idea. Profoundly it kind of changed the way I thought about everything. So I just started making these images for fun and posting one of them each and every day. I think everything I’ve done since then has been inspiring that overview effect to the audience. Showing people something that’s really big or very complex, something that’s never seen before forces the brain to develop new mental models to understand what is being seen. I think it’s a powerful experience. 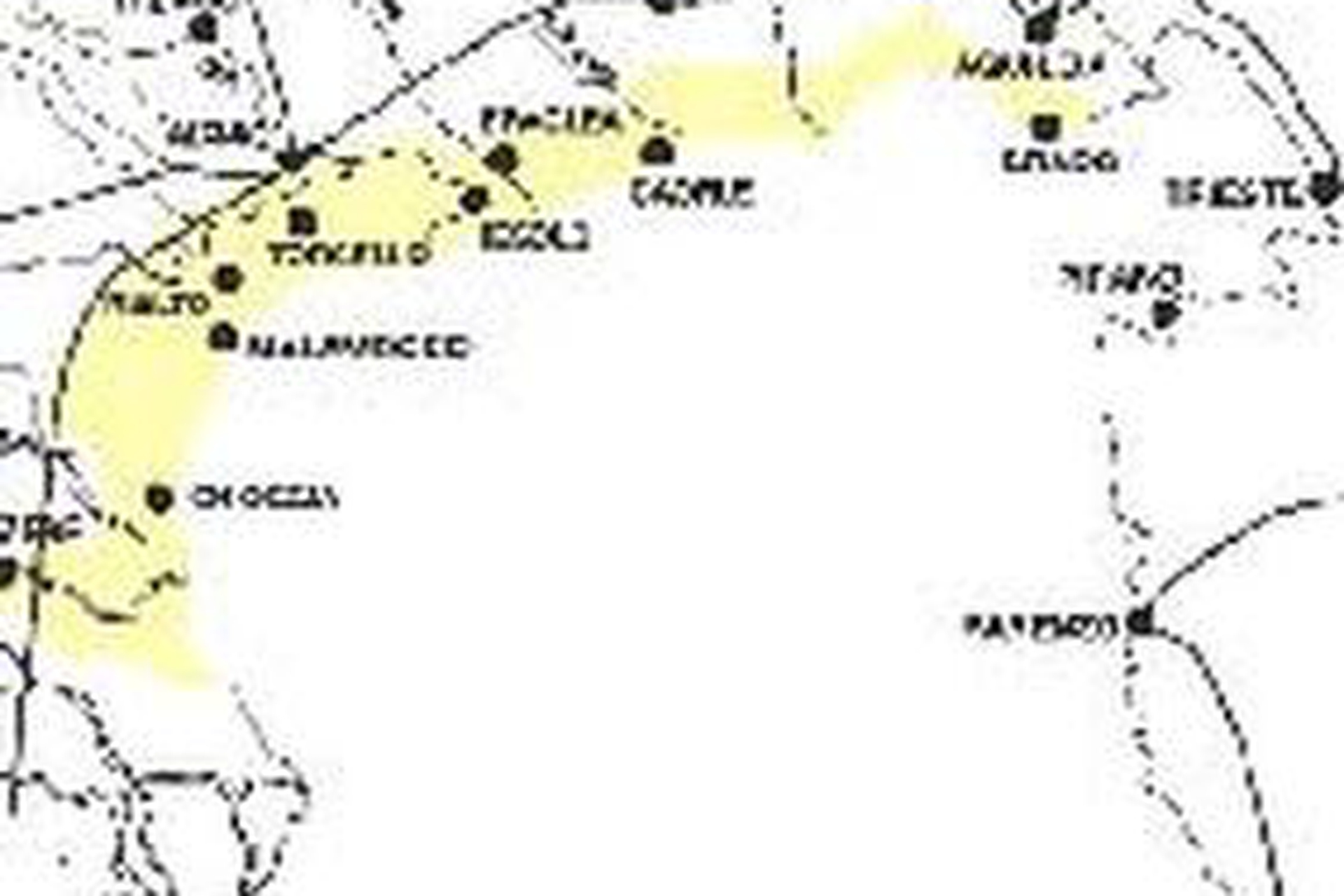 How do you choose the subjects of the images?
At the beginning of the project we decided that all of the places we would focus on would have some form of human impact. So energy, mining, agriculture, transportation, city planning, and so on. Of course, every image has to tell a story, or something related to what’s happening in the world. And then we do the research on where they can be located in the world and make sure that they’re beautiful visually because we want people to see these stuff in a way that is appealing from above.

Talking about the impact we, humans, have on the Planet, what are the images you created that impressed you the most?
I think from a negative perspective the ones that have always called my attention are mines. It’s a rare thing seeing pictures of mines. They’re giant mines where we’re extracting minerals or elemtents like gold, lithium, iron, oil – key components of our civilisation that we often don’t know where they come from. They’re very destructive to the environment, but the positive thing here is the awareness that the things we use in our everyday life come from somewhere. But it’s also important to understand that there’s a toll taken from the environment and the Planet to get those minerals out of the Earth. So I hope this will start a discussion that leads to a safer Planet because people become more aware of those things.

And in a positive way?
From a positive perspective I think it’s cool to show what renewable energy looks like, from solar to wind farms. And again, it just starts with awareness: it’s important for people to know how their energy is created, where it comes from, and potentially the damage they’re doing to the Planet if consuming energy from coal or gas burning facilities We just need to figure out ways that reduce the amount of greenhouse gases in the atmosphere and we now have incredible new technology to do it, that makes that possibile. So we have to get people to force the shift to make it happen more quickly. And we have the ability to show it, and educate people about what are the solutions to a lot of the problems we face. There’s also a visual story of how renewable energy sources blend into the environment more than the ones producing greenhouse gases. If you look at a solar panel arm or windmills are more integrated into the landscape. Their impact is not only less but they don’t use up as much territory. Whereas you see a oil refinery or coal plant they’re much on their own, they’re connected to waterways and polluting waterways. You can see visually how one might be better than the other actually without having the exact information that tells you.

The book includes comparison images, what’s their meaning?
If you have one picture what you’re able to show is a moment of time but with those before-and-after images you’re able to monitor what’s happening to the Planet and expose the impact that we’re having. What you can actually see is how much change has taken place over a certain amount of time. If done well I think these can be the most powerful stories we tell from this perspective. And they’re not only about environment, but also humanity. The Zaatari refugee camp is probably the best example in recent memory of how an environmental disaster can lead to conflict and civil war and refugee crisis. A lot of people forget that the crisis in Syria primarily started because of a drought in the countryside that forced farmers into the cities, which caused unrest and chaos and the government ultimately crackling down on those people. The climate story is often forgotten and I think we forget how the climate can affect people on a personal level, or force them to leave their homes or even kill them. I think that starting to tell stories in powerful and meaningful ways is important and necessary if people want to change behaviour to create a better future.

The last chapter of the book is like a celebration of pristine and remote places man hasn’t set foot on (yet) – what kind of impact do you want this chapter have on the public?
Celebration is a very good word. I think part of the overview effect is to cherish the beautiful Planet we live on, like it just is naturally beautiful and amazing. When you look at the parts of the Planet that haven’t been touched, they just inspire incredible awe. Just stunning beauty, magnificence, wonder that you know you get from nature.

There’s also an element of time in the book. When you look at the places and how long it took for them to be formed – it can be tens of thounds and millions of years to form a volcano, lake or river, you get a sense of deep time. And when you compare that amount of time to the places or the development of the places in the other chapters that have been primarily built in the last 100 years or even 10-15 years you get a sense of not only how much impact we’re having on the Planet but you also get a sense of how quickly it all has taking place. If you recognise how long the earth has been here and how long civilisation has been here – it’s a crazy comparison. We’re doing so much to change the Planet in such a short period of time and I think that chapter emphasises it.

For you, what’s the importance of seeing things from a different perspective?
The power underlying all of our work is the ability to inspire awe in you, the ability to show you the places where you live in in an entirely new way, the power to understand the world in an entirely new way, the power to identify with places that are very far from you in a new way. All of these things are inherently there, in that prospective. As the project continues to grow and reach new audences it provides more evidence that the overview effect is really a real thing, not only a cool idea. These images are indeed impacting people on a psychological level in a positive way. I think that if we continue to bring that perspective to people we may not only raise a lot of awareness and have a lot of impact, but I hope we’ll have a bigger and positive impact to create a better future for the Planet.

Tulasi Gowda, the barefoot activist who looks after an Indian forest

Tulasi Gowda, walking barefoot through the plantations, can tell how the budding plants are doing with a light touch of her fingers.

A thousand elephants in Thailand risk starvation due to the pandemic

A thousand elephants could die of starvation in Thailand as the camps where the animals are exploited for tourism have had to close due to Covid-19.