According to a new study the colour of butterflies and dragonflies depends on climate. Global warming is changing the way they are distributed in favour of lighter-coloured ones.

Insects are the largest group of animals on earth. More than a million species were classified according to shape, colour and dimension but those data are incomplete and every year new species are discovered.

Many insects have an important role in preserving the environment but nobody ever imagined that they can help foresee the effects of climate change. According to a study conducted by the scientific journal Nature Communications, there is a connection between the colour of insects and their distribution, which is influenced by climate.

This piece of research, led by Dirk Zeuss of the University of Marburg, uses data of 473 insect species, including 366 European butterfly species and 107 dragonfly species and crosses those concerning the colour value of the body and wings with those concerning temperatures. The study shows that insect species with dark colouration live in cool climates, while light-coloured insects have advantages in regions with warm temperatures, exactly like human beings who would rather wear light coloured pieces of clothing in the summer because of hot temperatures. 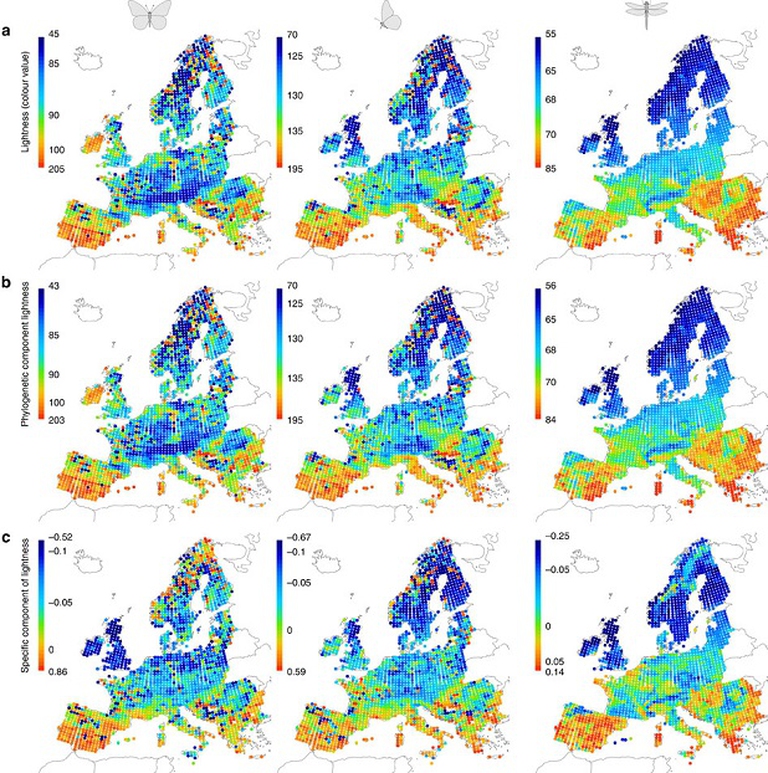 Some insect species, such as butterflies and dragonflies, are cold-blooded creatures and in order to move, fly and eat, they have to absorb energy from the sun. For this reason, and in order to protect themselves from warming, the insects living in warmer areas are more likely to be light coloured.

Researchers also discovered a general shift towards lighter-coloured assemblages in the last two decades as a result of the gradual increase of temperatures. The distribution of dragonflies in the Old Continent has changed between 1988 and 2006 along with the increase of average annual temperatures. Dragonflies have also become lighter and the darker ones have moved to the Alps and the Balkans.

According to scientists there is a connection between the geographical distribution of these animals and climate change. «Global warming favours light-coloured insects in Europe – claim the authors of the study – while dark-coloured insects will shift their distribution and possibly retreat from certain areas and/or on a smaller scale will shift their habitat preference to more shady conditions».