Sue, the Tyrannosaurus Rex that can be ridden like a bike

This dinosaur-shaped tricycle was sold on Craigslist for 2,000 dollars. It is 2.6 metres tall and its jaws can be moved with the handlebars.

Have you ever dreamed to ride a Tyrannosaurus? Unfortunately, your dream won’t come true. But there’s something that can get close to it: a T. Rex-shaped bicycle with three wheels. Or, more precisely a T. Rex’s skeleton-shaped bicycle, excellent if you don’t want to go unnoticed when you ride your bike, or during Halloween or Carnival.

It’s a 3.6 metres long and 2.6 metres tall big tricycle with a seat at 1.5 metres from the ground. Thanks to its nine gears it is possible to pedal on the cycling skeleton with a speed of up to 25 km/h.

The Rex-tricycle has even a name: it’s Sue and it was produced in Oregon, United States. Sue is the name of the largest Tyrannosaurus Rex ever found and is kept in the Field Museum of Natural History of Chicago. 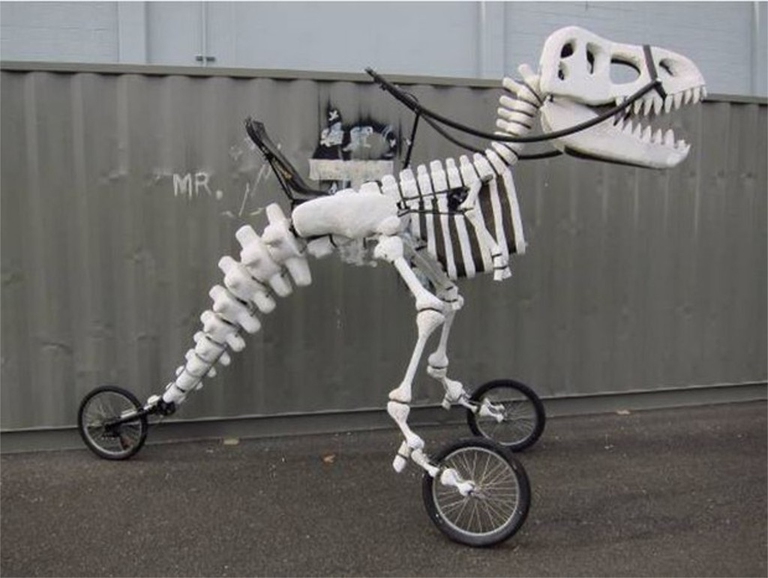 The cherry on top is the fact that it’s possible to move the jaws, head and feet of the tricycle through the handlebars. The bike is made of chromed steel, textured paint and latex foam. There are cables that pass through the handlebar that are similar to reins and enable the dinosaur to open mouth.

The only negative aspect of this means of transport for bike lovers is that it is not suitable for daily use and that it requires permanent maintenance works. This is not by chance that it was sold on Craigslist with a special paint. The lucky person who managed to buy the wheeled T. Rex payed 2,000 dollars for it.