In the Netherlands there are far many bicycles so much so they took up all the racks as well as public areas in big cities. That’s why the Dutch cycling embassy, a public private network operating in the field of urban planning and mobility in the Netherlands, is collaborating with the Dutch railway company to promote Ov-fiets, a new bike sharing system integrated with public transport. The recipe? Low costs for the service, many bike-rental stations and season tickets including public transport tickets.

The problem in this case is not encouraging people to use bicycles, but pushing them to choose public transports and bicycles as well. “The Netherlands is the only country in the world to have more bicycles than inhabitants”, says Anita Dirix, member of the Dutch cycling embassy. “Every person has on average 1.2 bicycles. But we have a problem with the quality of public space. That’s why we’re interested in sharing bikes”.

There’s available a card with chip that allows to use the bike-sharing service as well as public means of transport. So, with this card it’s possible to take the metro, train and at the same time rent a bike for 3.5 euros daily. “So, you can reach the train station by bike, then leave it to the rental station and once arrived at your destination, rent another bike”. 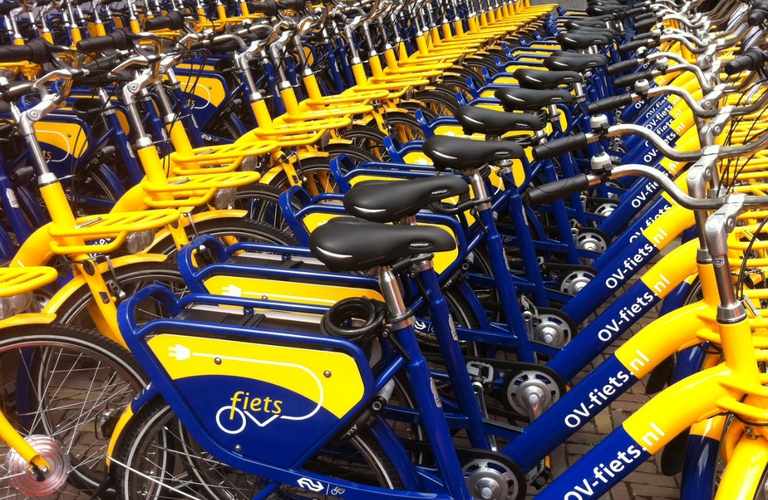 Today there are more than 8,500 bicycles, which aren’t stored in the night, because they’re cheap and extremely resistant, in about 300 rental stations, most of which are located near train or metro station. Cost: 10 euros per year.

“Your service is expensive, both for the quality of the bicycles and because you have to store them every night”, says Anita when talking about BikeMi, the bike-sharing service adopted in Milan. “Unlike you, we aim at offering a low-cost service. Bicycles are just two-wheeled means of transport, they don’t have to be necessarily trendy”. While in Italy bikes are shared in order to reduce car traffic. In Northern Europe the problem is the opposite but the solution in this case is the same.