Just as fires often give way to new growth, after the Dieselgate scandal, which saw Volkswagen cheating on US emission rules, the German car manufacturer radically changed course, beginning to focus on sustainable mobility. The German car company aims to propose thirty zero-emission models and produce at least one million battery electric vehicles by 2025. An ambitious mission that pushed the Wolfsburg-based company to unveil a new I.D. (Intelligent Drive) electric propulsion vehicle at the Detroit Car Show. The mythical Volkswagen van has now been brought back.

The new Volkswagen van is electric, multifunctional and hi-tech

The Transporter T1 minivan – nicknamed Bulli – has become an icon of the ‘60s. One of the most famous and appreciated models produced by the German car manufacturer thanks to its robustness, simplicity and versatility that made it the ideal means of transport for hippies and flower children in Europe as well as in the West Coast of the United States. And now this vehicle has a new heir. An electric and self-driving van named I.D. Buzz, which boosts exceptional modular interiors and high technology.

From living room to bedroom thanks to the self-driving technology

In the German concept – which is perfect for travelling and is almost five metres long – once the driver turns the self-driving mode on, it is possible to turn the seats by 180 degrees and transform the cabin into a lounge space or a bedroom. It has two boots and eight seats, a steering wheel with touch controls that can retract into the instrument panel when autonomous mode is activated. And the dashboard? It’s portable, since drivers can see information through a removable tablet or a specific app installed in their smartphone.

The design is intentionally vintage, but the I.D. Buzz is full of technology. With the automatic recognition of the driver, for example, it is possible to adapt every parameter of the car according to the driver’s taste and habits, while the head-up display uses augmented reality. And that’s not all. Thanks to its cloud service the vehicle is always updated in real time, without the need to go to car markets or mechanic’s workshops. The vehicle has two “zero emission” motors of 370 hp and all-wheel drive. 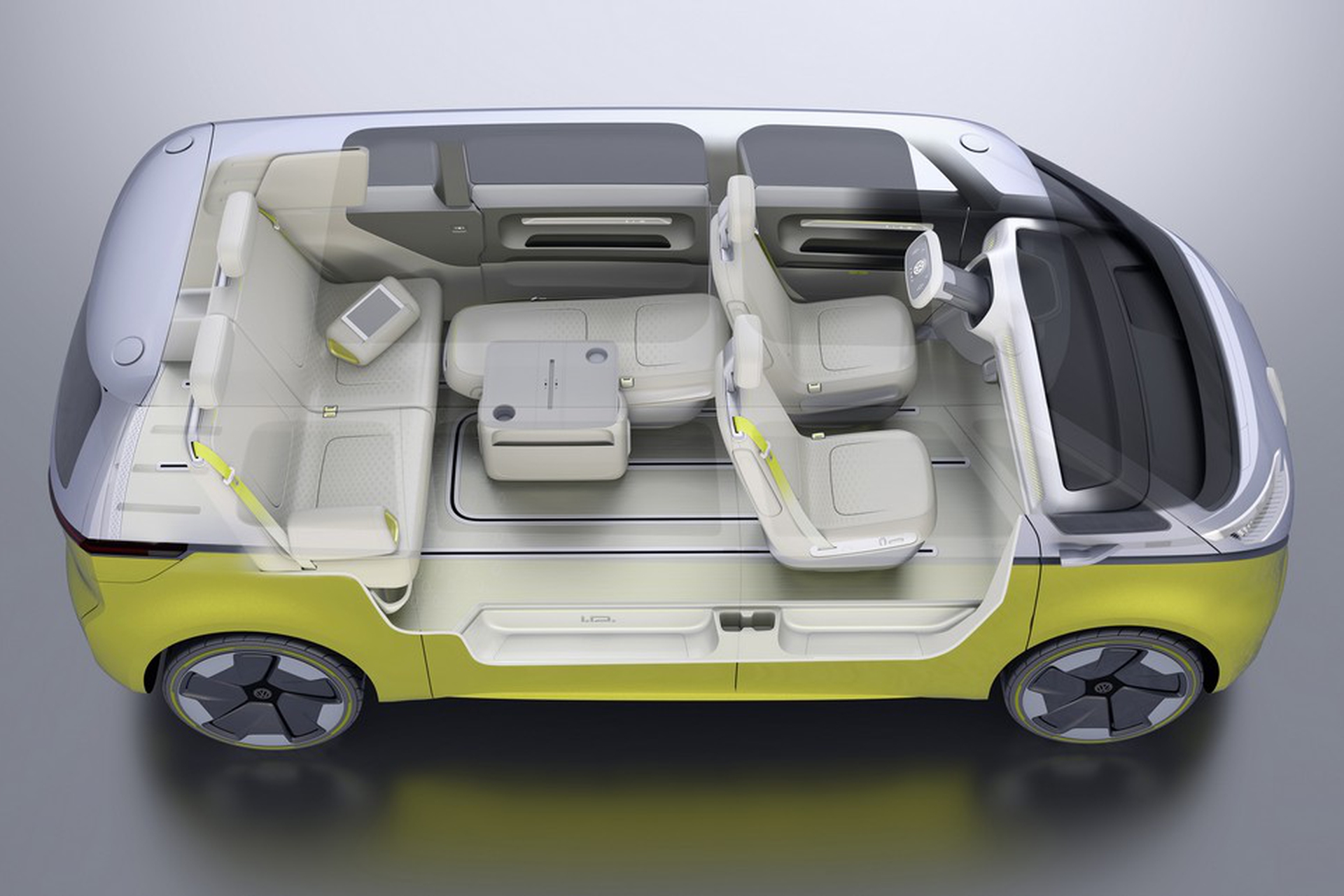 The new electric minivan runs 600 km on a full charge

The German electric minivan uses batteries of 111 kWh that can be charged to 80 percent in about thirty minutes thanks to high capacity chargers of 150 kW. The rechargeable batteries are inserted in the platform, so to lower the focal point – which improves the quality of driving – and not to occupy space in the cabin. Thanks to these batteries the car travels 600 kilometres on a full charge according to the New European Driving Cycle (NEDC), and 434 kilometres in real conditions, while its sprint time of 0-96 km/h in less than five seconds is comparable to that of sports cars. The Volkswagen concept, which will be available even in a more affordable version with rear-wheel drive, 268 hp and batteries of 83 kWh, isn’t merely a style exercise like the show car Budd-e unveiled in 2016. Based on the MEB platform, invented by the Wolfsburg-based giant for zero-emission propulsion vehicles, I.D. Buzz is rumoured to be sold all around the world by 2021.