Marco, you are a beekeeper hobbyist, since you actually have another job. Why do you have this passion?

Everything started about 10 years ago when I first met a man, a 70-year-old beekeeper who let me discover an amazing brand new world.  Thanks to him I decided to attend technical courses in order to learn a profession that has nothing to do with my job. I work in a bank, but I dedicate my spare time to honeybees. 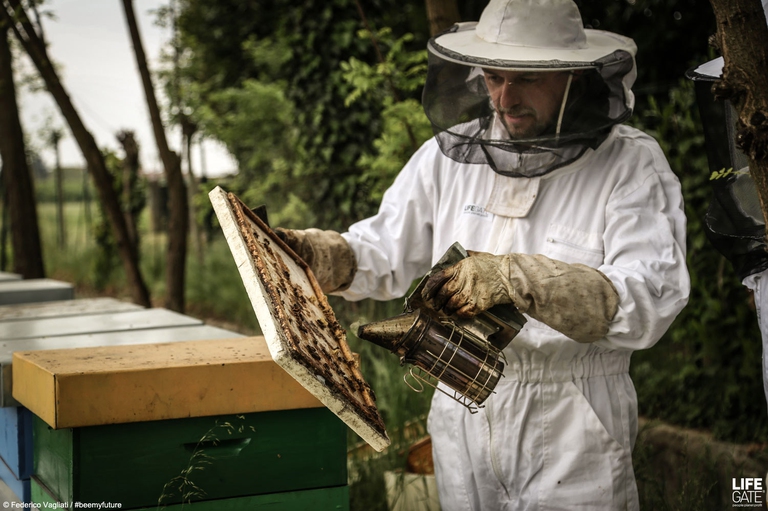 Do you hope to make a job out of your passion in the future?

I really thought about it. I don’t exclude it, but I like my “real” job and quitting it for something risky is a tough decision to make. Beekeeping is highly unstable as a profession. I give you an example: acacia honey is produced throughout May, and its tree blooms over about 3 weeks. Last year it rained for 22 days in May alone. It is thus easy to imagine how much acacia honey has been produced. However, but I keep open the possibility of making it my job.

Latest articles and news refer to the neonicotinoids, the insecticides. What kind of effects do they have on bees? Do they represent a risk factor?

Luckily, I didn’t have to face significant bee deaths. I always looked out for choosing areas protected from this kind of problems. But I know other beekeepers that had to face the death of a huge amount of honeybees. It is scientifically proven that due to some agricultural treatments phenomena like bee deaths occur, and several beekeepers ended up with hives half empty. Fortunately, in Europe there is a moratorium on neonicotinoids. Moreover, a solution would be practicing organic farming. However, another big problem is habitat loss, which represents a reduction in the areas where bees can pollinate, due to the rapid expansion of urban centres. Let’s talk about the role of the beekeeper. Many people wonder about the importance of human intervention in a naturally perfect mechanism.

Bees’ main enemy are humans. However, the beekeeper is not responsible for bee deaths, because its role is making bees produce an amount of honey higher than normal levels. The amount of honey we take from them is a “surplus”, an amount they would not use in any case. However, you can’t take more honey than the amount they need to survive the winter. For this reason between the beekeeper and bees a sort of balance, a symbiosis, is created. Beekeeper’s real aim is one: protect bees.

And the world of bees. What are the roles within a hive?

The worker bee, in its first days of life, is only responsible for the cell cleaning. Later, it takes care and feeds larvae. Further tasks will be the honey storage and nectar procurement. During the last stage of its life the worker bee becomes a guardian. There’s a real progression of tasks depending on age and needs. 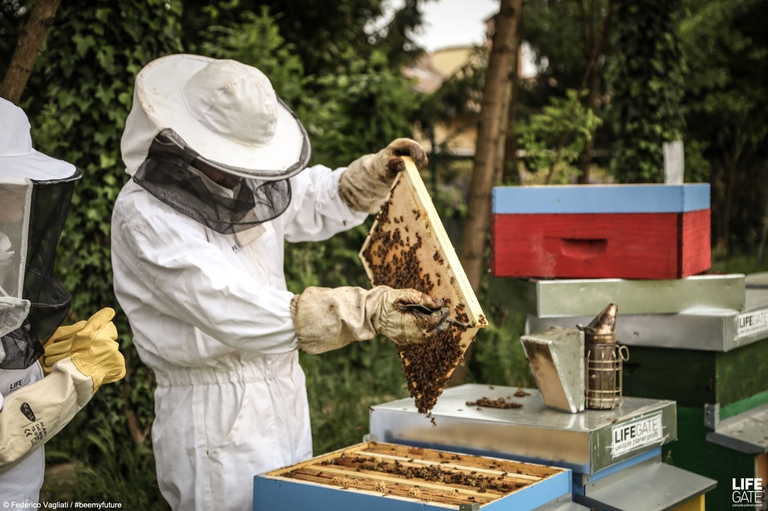 Which is the most important bee?

The queen bee. It is the mother of all bees and it is only in charge of reproduction. Drones, the male bees, have a less precise task, concerning control and ventilation.

And the most curious role?

A bizarre role is that of some bees which, during a period of the year, have the tasks of drying honey. To do that, they flap their wings to provoke the air needed to reduce humidity and keep the hive temperature uniform.

Is there a relationship between the beekeeper and his bees? I mean, does he grow fond of them? And do they recognize his arrival?

I like to think they do, but they actually don’t. I really care about my bees, but I don’t think they recognise me. Some bee colonies are more aggressive than others, and sometimes it’s better not to visit hives in certain meteorological situations, such as rain or wind. There are many existing differences in bees’ behaviour, but no difference of behaviour exists with the beekeeper. I would like to say they recognise me, sometimes I even talk to them, but – alas –it is not so.

How did the collaboration with Bee my Future start and why did you embark LifeGate’s journey?

The cooperation between APAM (the Beekeepers’ Association of the Province of Milan, of which Zucchetti is part) and LifeGate was unexpected, but it was soon clear that both of them wanted to do something tangible for bees. We then found the perfect solution for our collaboration. What we made has the advantage of being replicable. It is a small-scale beekeeping model never seen before in the outskirt of a city. We demonstrated that it is possible combine humans’ existence with that of bees.

Can beekeeping be organic?

I’m afraid we can’t talk about organic beekeeping, especially in cities, because we should be absolutely sure that bees go gather, i.e. collect nectar, in an area cultivated only according to organic principles. We thus directly commit in using nothing chemical or processed. We want to demonstrate that bees can live a quality life also in urban areas. We are succeeding in doing this. Because our food depends on bees.

Ranger killed by poachers for protecting elephants in Congo