Renu Bala Sardar shudders with fear when she thinks of the cyclone that ripped through her village on the 20th of May. The horrors of the fateful day continue haunting her.

The 45-year-old resident of Deulbari village has hardly slept more than an hour in the past few days. She lives in the part the Sundarbans – the largest mangrove forest in the world – in the state of West Bengal, in eastern India, near the border with Bangladesh. “It wasn’t a cyclone but a monster that came to devour our lives. We were lucky to escape its wrath but our homes have been reduced to a heap of mud. How can I sleep when surviving every single day is itself a challenge?”.

Cyclone Amphan leaves a trail of destruction in West Bengal

Situated on the bank of the Matla River and its tributary Makri, the village appears post-apocalyptic, dotted with the skeletons of houses, helpless people and a hungry river waiting to eat up whatever has been left behind by the catastrophe.

Cyclone Amphan slammed into India’s eastern coast on the 20th of May, knocking down huge trees, lamp posts, electric wires and turning millions of people homeless in West Bengal’s most affected districts: Kolkata, Howrah, Hoogly, East and West Midnapore, and North and South 24 Parganas. Wind speeds of 150-160 kilometres per hour were recorded in the coastal areas once the cyclone made landfall. 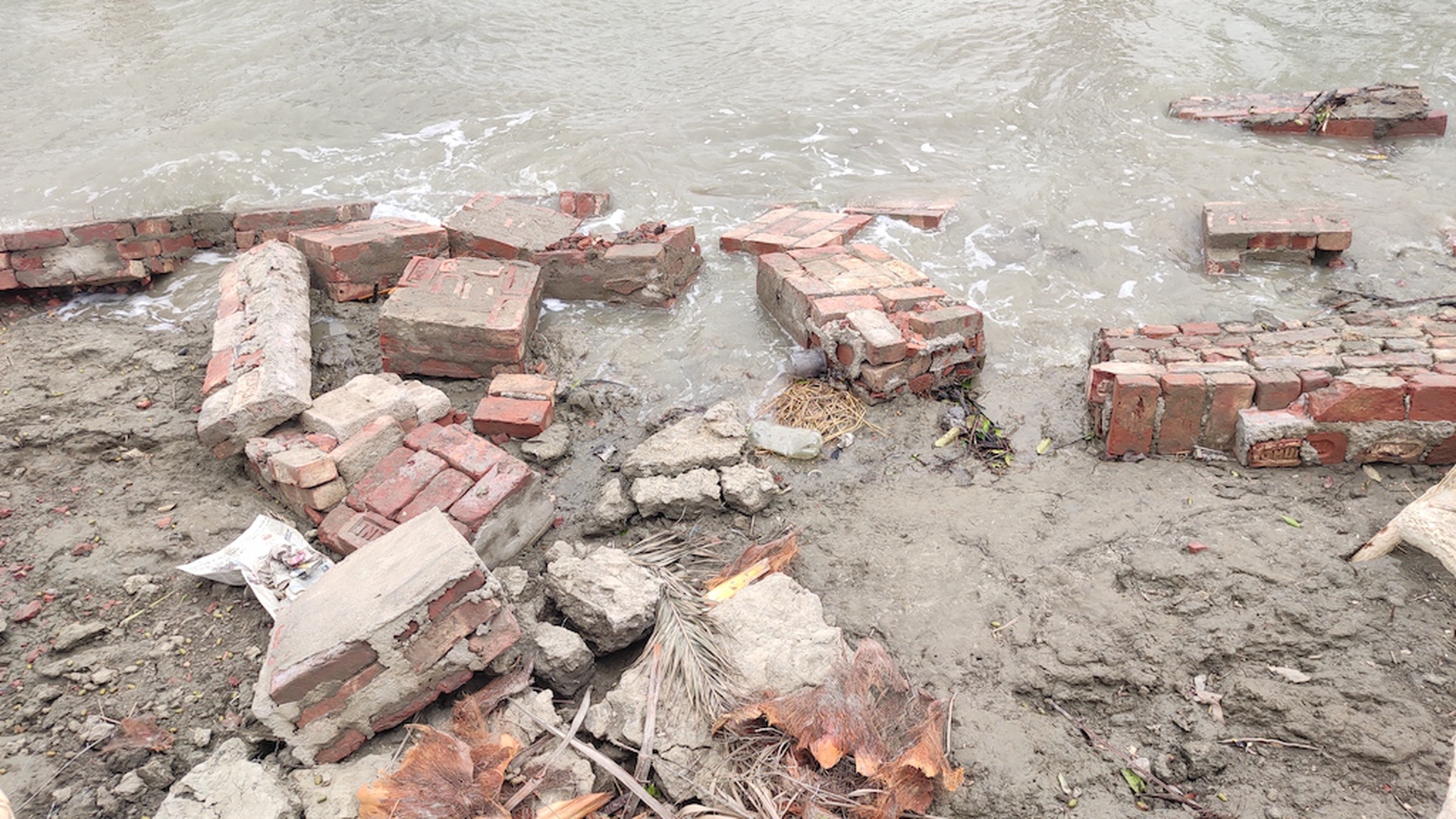 According to the state government, 86 people lost their lives in one of the worst cyclones to hit the area since 1737: one of the fiercest in recent years, more powerful than Aila and Bulbul in 2009 and 2019 respectively. 300,000 people were evacuated to relief shelters, according to West Bengal’s Chief Minister Mamata Banerjee and millions of people are estimated to have been left homeless. Two days after the tragedy, Indian Prime Minister Narendra Modi made an aerial survey of the affected areas together with Banerjee and declared an advance assistance fund of around 154 million US dollars for relief work.

#SATELLITE SPOTLIGHT: As it passed over the #BayofBengal this morning, #NOAA20🛰️ captured this image of #TropicalCyclone #Amphan moving northward toward #Kolkata, #India, and #Bangladesh. At last report, winds were sustained at 125 mph and landfall is expected on Wednesday. pic.twitter.com/7BBuhdGP8b

Sundarbans, which falls under both North and South 24 Parganas, was the worst hit area because of its economic fragility. The region comprising around 102 islands is known for its extensive mangrove cover and is Bengal’s first line of defence from the fierce storms that periodically arise in the homonymous bay. Thousands of trees were uprooted here and other parts of the state, damaging transformers and disrupting power supply for several days.

Abdul Qasim, 52, who lives in Gosaba block, one of the worst hit areas, lost his mud house in the cyclone, but blames his ignorance for this. “The administration had made repeated announcements to vacate houses and rush to safer places but we didn’t take it seriously as cyclones are common here, but who would have thought it would destroy everything and reduce us to paupers. My entire savings, which I kept in the house, have been lost to the cyclone. Nobody has come to help yet”.

Apart from the loss of property, the major problem has been the breach of embankments leading to the entry of saline water in agricultural fields. “We’ve lost everything as the saline water has destroyed our crops,” says Gosaba block resident Sabina Begum, 55. “Nothing is left of the vegetables I’d grown. The situation won’t improve unless the embankments are repaired and the saline water is drained out of the fields. I used to earn my livelihood by selling vegetables but nothing remains anymore”.

Most of the population in Sundarbans relies on fishing and catching crabs. The over two-month long lockdown due to the coronavirus pandemic coupled with cyclone Amphan has made their condition pathetic. “The lockdown had already shut our business as local markets well as exports to China and other countries came to a complete halt,” says crab catcher Judhistir Mondal, 45. “We were thinking of resuming activities as the government started relaxing the lockdown, but Amphan has washed our hopes away. Our homes have been flattened by and our source of livelihood is also gone. We’re in a mess”.

Huge damage to life and property has been also reported in other districts. State Agriculture Minister Ashish Banerjee fears that Amphan has ravaged the farming sector in at least 14 of West Bengal’s 23 districts and the losses incurred may be an all-time record.

For example, several acres of standing paddy crops were destroyed in eastern Burdwan, and Malda and Murshidabad districts, known for luscious mangoes, have seen crops entirely wiped away. “The mango production had already suffered due to unseasonal rains and hailstorms in February-March, when the flowers were sprouting,” says Sayed Nurul Islam, 50, a mango farmer in Poranpur village in Malda district, which, spread across 31,000 hectares, produces around half a million tonnes of mangoes every year and in which 400,000 people depend on this trade. “Around 70 per cent of the crops had been destroyed but the cyclone devoured everything that was left: we fear the damage may concern 38,000 metric tonnes of mangoes”.

The situation is no better in Kolkata, the state capital where over 5,000 trees were uprooted and people were forced to live without power and drinking water for several days. Protests erupted in various pockets of the city blaming the state administration for laxity in restoring essential services. Furthermore, as if the cyclone wasn’t enough, the squall, known as kalbaisakhi in local parlance, uprooted several trees in some parts of the city, blocking traffic a week after Amphan hit.

Environmentalists point out that the loss of trees on a mass scale will likely lead to increased air pollution in Kolkata and outskirts. “We’re going to witness four-fold rise in pollution levels against the World Health Organisation’s permissible limit as most of the green cover in the city and its districts has been lost in the cyclone,” Soumendra Mohan Ghosh, auto emissions consultant and environmentalist, points out. “It would take at least seven years for trees to start absorbing such levels of carbon dioxide. Of note is that rising air pollution is also linked to increase risk of pulmonary diseases,” a fact that can’t be ignored also considering coronavirus’ strong relation to pollution. This, as others, is one of the devastating long-term consequence of Cyclone Amphan.