Copenaghen combats flood risk by designing a district whose purpose is to tackle climate change. Nature lies at the heart of the project.

Four years after the terrible storm that ripped through Copenhagen causing damage of more than five million kroner, the Danish government decided to deal with the effects of climate change by planning the creation of a new district through nature. 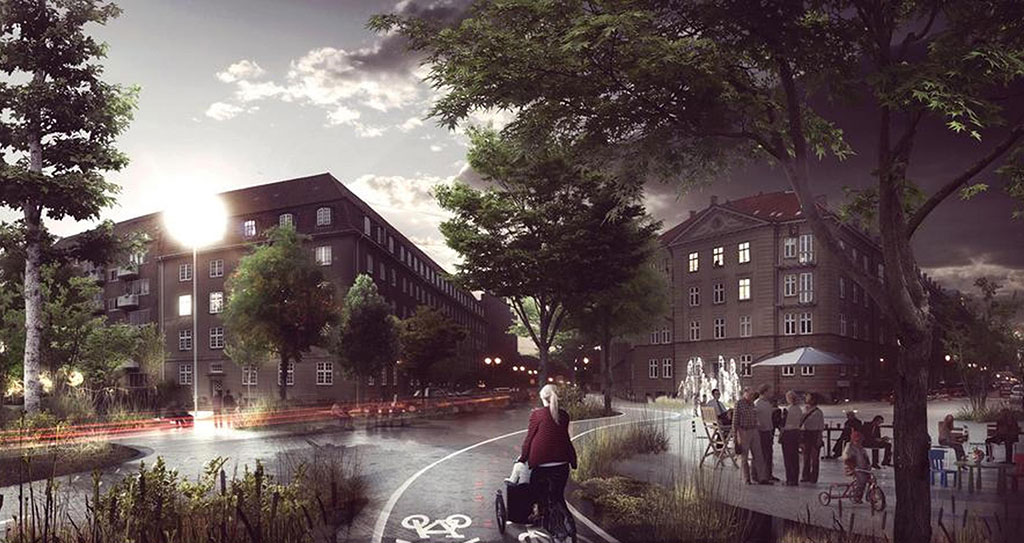 On 6th December, the new district Saint Kjeld, designed by Rafn Flemming Thomsen and Ole Schrøder of the Tredje Natur studio was inaugurated. After a careful analysis of traffic, existing infrastructures and the natural flow of waters, in Saint Kjeld’s Square and Tåsinge Square different species of trees were planted and new green areas were created to ensure water filtration. Vegetation and water are the strengths of this project, which aims to protect the city from sea level rise and storms. Its goal is to turn 20 percent of the urban fabric into green areas that can absorb a big amount of rainwater without overwhelming the sewers.

Nature makes cities resilient, i.e. able to cope with environmental disasters. Resilience, that is the capacity to recover quickly from a disaster, is exactly due to parks and tree-lined avenues within the core building. The design of the Danish studio provided for the replacement of paved streets with hilly turf to stem the flow of water and allow water filtration. So, in case of flood or storm, the soil re-naturalisation ensures the outflow of the rain in artificial basins and, subsequently, into ducts that will end up to the sea. Water is brought from the roofs and roads to the port where it is drained; pedestrians, at the same time, take cover in causeways.

The approach of the local government is a model of sustainable urban planning through which it is possible to incentivise the development of useful technologies for facing environmental disasters and increase the citizens’ quality of life.

Sustainability is achieved through the creation of a greener city and the management of environmental policies aiming at the adaptation to climate change. As a matter of fact, being aware of being the major cause of global warming and having to tackle it with daily and environmentally conscious practices, is the best policy for the sustainable development of cities.