Riding a bike to stop wars during the Olympic Games: here’s Bike4Truce’s project

An online petition to the U.N., a documentary and a bike ride in Brazil, in occasion of the 2016 Olympics: here’s what the Bike4Truce project for world peace is all about.

Give me a bike and I’ll bring peace to the world. This could be a slogan for the initiative Bike4Truce started by OLOS Foundation, that has been committing itself for years to reach a truce and stop wars during the Olympic Games.

The Olympic truce should be declared through a resolution adopted by the UN General Assembly. The idea is inspired in the concept, developed in ancient Greece, according to which the Olympic Games are a symbol of exaltation, civilisation, ethics and aesthetics.

The truce would start the week before the beginning of the Olympics and finish the week after the end of the Paralympic Games (in the summer as well as in the winter). This period will be used to reflect on how to avoid conflicts to resolve controversies.

Proposing a truce is a courageous attempt to put an end to wars, at least for a period. “Bicycles, which stand for sustainable mobility and a healthy lifestyle, can be a strong ‘weapon of peace’ and an even stronger one thanks to the support of people on the Internet”. 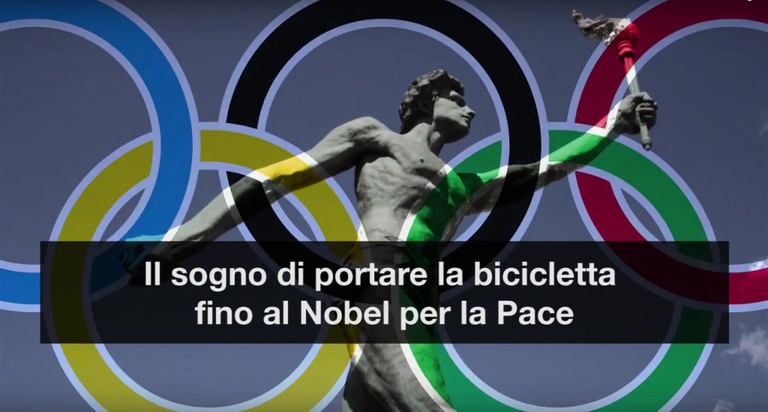 Bikes become a means of mediation, peace that teaches a different lifestyle where the reduction of air pollution goes hand in hand with a global reduction of conflicts. Bike4Truce’s dream is that of nominating bicycles for Nobel peace prize, as happened to the Tunisian National Dialogue quartet in 2015.

In 2012, twelve Italian cyclists left Belgium on a ride through France heading for London during the Olympiads. For the 2016 Olympics in Brazil a bicycle parade is being organised from Sao Paulo to Rio de Janeiro, in collaboration with the Brazilian Cycling Confederation and the World Bicycle Forum.

The initiatives include a petition launched on Avaaz addressed to the Secretary-General of the United Nations and the diplomatic representatives of the UN member States.

The Bike4Truce project is supported by a crowdfunding campaign and the sale of a documentary realised for the occasion.