A bicycle-powered community library in the streets of San Francisco to promote the passion for literature and willingness to learn and know. “Page by page, book by book, pedal by pedal” is the motto of the non-profit project Bibliobicicleta that started through successful fund-raising on Kickstarter.

Thanks to the support of 117 donours, 2200 dollars were collected to start the project. Now, Alicia Tapia, a school librarian who loves reading, can devote much of her time to this ambitious project. After a year she has managed to partner with some local organisations and receive more and more donations from private citizens as well as public institutions. 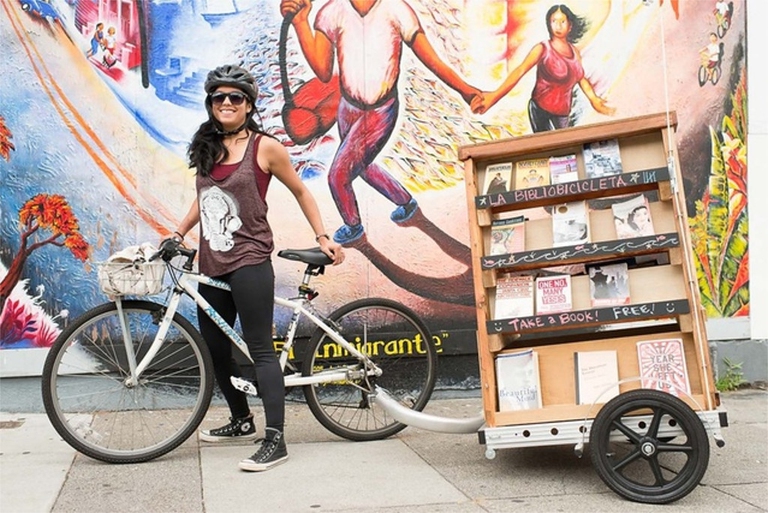 Some users borrow books for free to read them and learn from them, some others donate the ones they don’t read anymore. In so doing, there’s a turnover of titles available in the travelling trade library.

Alicia Tapia’s courage also consisted in riding a bike with such a big trailer across the roads of San Francisco, which notoriously go uphill and downhill.

That’s why she asked new donations, in order to have the opportunity of purchasing an e-bike on sale, a goal she reached just after two days of crowdfunding.

With her “bibliobicicleta” she usually takes part in community events, goes to parks and beaches, and even to the places where homeless people live offering books for free to those who lack access to culture.

“Books do something for the human brain that nothing else can” Alicia Tapia told the magazine Good. “With books comes happiness, and people build empathy for one another”.