The bike riding of Becycling from China

After celebrating a year riding around the world Daniele Carletti and Simona Pergola arrived in China. Since the beginning there were a few problems: the visa on the passport expires in 30 days, not enough to travel China by bike.

On 25 July the guys met three Chinese cyclists that were going to Tibet towards the Hymalayan mountains. Daniele and Simona couldn’t follow them because foreigners travelling on their own don’t have the right to get to Tibet. 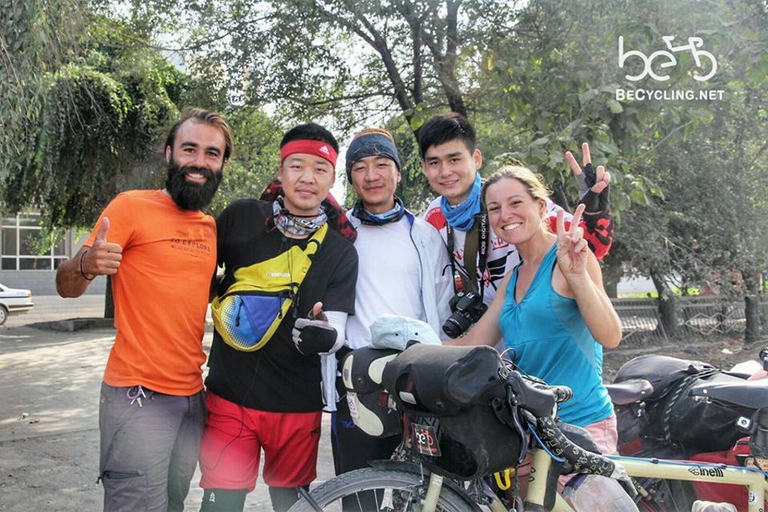 Instead, they passed through Xinjiang, a region known for its lavender fields and a destination reached by many Chinese tourists.

Between late July and early August they reached three Chinese passes higher than 3000 metres. It was in these days that the Becycling couple celebrated their 14,000 kilometres of riding, with a beautiful video where they show their improvements with mandarin.

After the mountainous fresh air they experienced the burning temperatures of the Kumtag desert, between Turpan and Hami: “Daniele tried to commit suicide shooting his head with a water spray – they write jokingly on Facebook – Simona, instead, wanted to drink the sunscreen to have better protection. So crazy! Maybe these weren’t the most difficult kilometres of the journey but surely they were the most exhausting considering extremely hot temperatures and the wind!”.

An unpleasant inconvenience on 10th August, an unexpected guest in the tent: a type of spider, that later was identified as a camel spider or sulifuges, that is an animal with a painful bite but not poisonous. Good!

An impetuous wind slowed the cyclists down for a week and obliged them to pedal with a lower gear. The voyage continued in the highway, where they needed to find shelter in a tunnel to have a rest and protect themselves from the sun; the highway there is enclosed so, once you enter, you can’t get out of it so easily.

At the end of their Chinese adventure they went by train from Jiayuguan to Guangzhou during 36 hours. They used the train to go to Hong Kong and greet continental China, just in time for their visa expiry!