How bison will save us from climate change. The dream of Pleistocene Park

Two scientists are restoring an ancient ecosystem in Siberia by reintroducing large herbivore, with a dream in their mind: halting melting ice.

Until a few thousand years ago, the Siberian steppes were crawling with living creatures, like the Serengeti savannahs. Deer, wild horses, antelopes, woolly rhinos, pronghorns and mammoths used to roam these vast grasslands, fertilising the soil and promoting the growth of vegetation. Then global warming and the rise of the Homo Sapiens, a small hairless primate with extraordinary adaptability and an insatiable appetite, brought forth the rapid decline of megafauna, causing the extinction of many species and transforming Siberia into the sterile and frozen wasteland we know today. Nevertheless, at the end of the 1980s, a visionary ecologist named Sergey Zimov tried to invert this trend and go back in time to by setting in motion what he defines as “the greatest project in the history of mankind”, the Pleistocene Park. 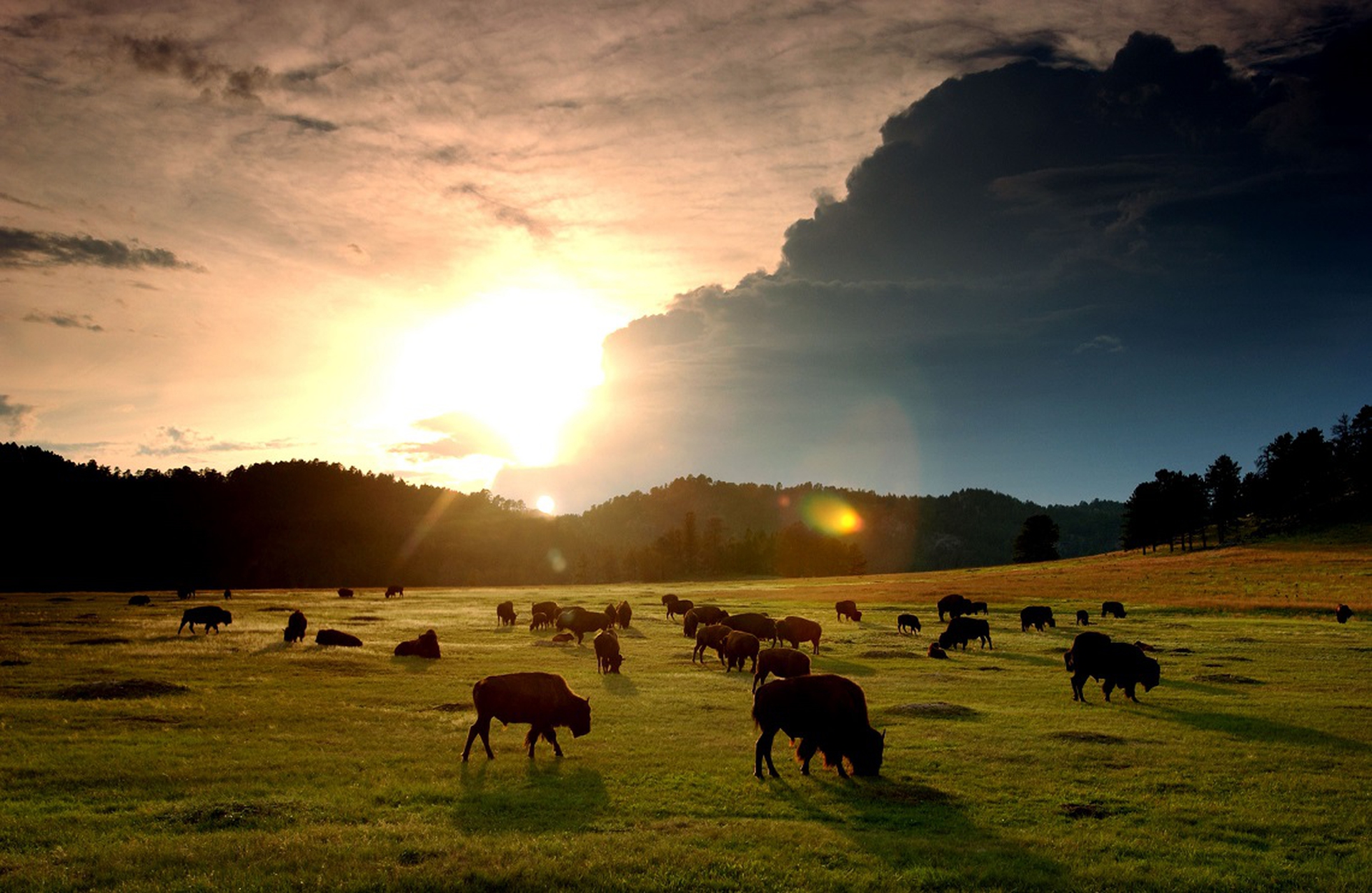 Return to the age of mammoths

Pleistocene Park is a radical geoengineering project situated in North-Eastern Siberia, close to Čerskij in Jacuzia. The two scientists in charge of the Pleistocene Park, father and son Sergey and Nikita Zimov, are attempting to regenerate the 10,000-year-old ecosystem that was present in the Pleistocene era, and give new life to the Siberian steppes. During that geological era, vast areas of the planet were covered by grasslands, a colder version of the African savannah, and were characterized by a stunning biodiversity. The Pleistocene park was founded in 1996 and has been expanding ever since, the objective is for the park to continue spreading across arctic Siberia and reach North America.

The area’s rewilding began in 1988, with the release of the yakut Siberian horse, thought to be a close relative of the wild horses of that used to roam the region towards the end of the Ice Age. Successively, musk oxen, bison and deer where reintroduced, whilst reindeer, elk and wild snow sheep (Ovis nivicola) already inhabited the area, as well as lynx, wolves, bears and wolverines. Zimov and his team are considering the reintroduction of many other species that used to inhabit the region, or that are closely related to them. Among these we can find saiga antelopes, camels, Amur leopards, Siberian tigers and lions.

Pleistocene park will save the world

As predicted by Zimov’s experiment, the herbivores that were reintroduced to the area are turning the tundra filled with musk and lichens into a grassy steppe. His hypothesis predicts that the rebirth of the grasslands will in fact reduce global warming. This is the project’s main objective, slowing the rate at which permafrost is melting and prevent the massive amounts of CO2 stored in the ice from entering the atmosphere. “I’m not one of those mad scientists who just wants to make the world green – Nikita Zimov explains to the Atlantic – I am trying to solve the larger problem of climate change. I’m doing this for humans. I’ve got three daughters. I’m doing it for them.”

The return of large mammals that used to inhabit the steppes is altering the ecosystem, and has restarted mechanisms that were halted thousands of years ago. Herbivores graze grass and contribute to the recycling of nutrients, they fertilize the land and loosen it with their advance. This is how animals help slow down the melting of arctic permafrost. The steppe ecosystems carried out a vital role in the delineation of the planet’s climate. The tundra was the main carbon tank during the ice age, whilst it released thousands of tons of CO2 in the atmosphere in the global warming period. When the grasslands were left without herbivores, ecosystems started to degrade until they were replaced by low productivity modern ecosystems, where animal population were never able to recover the density it once had.

The birth of Pleistocene Park

Pleistocene Park is an ambitious and visionary product, and we asked the director of the reserve, Nikita Zimov, how the idea was born. “The idea was generated by my dad. There are two versions I know of, I’m not sure any of them are really true. The first version is that he noted that wherever you would destroy tundra or local forest, grasses started growing. So wherever the crawling transporter drove in tundra, the path would be visible for years, since mosses would be replaced by grasses. I think that was the first insight. That was the moment the idea for Pleistocene Park started to develop. We are still improving our vision. When my dad started his first experiments back in 1988, there wasn’t even such a thing as global warming, and the effect of animals on vegetation was not considered a factor in climate change. The second version is more fun. When my dad was a teenager he was a hunting enthusiast. He used to spend a lot of time with a self made gun looking for prey. He chose to study freshwater hydrology because he envisioned himself coming to the middle of nowhere in the wilderness, hunting all the time. However, after 5 years when he finished university and came to the North, he figured out that A- animals are really few, and B – it is nearly impossible to walk through modern Arctic terrain made up of tussock tundra and dense willow shrub.  And since he is very stubborn and had already spent 5 years trying fulfil his dream, he started to think of ways in which he could make this place more navigable and full of prey. However, I rarely remember my dad going hunting since I was born, after you get into rewilding it doesn’t make much sense.”

The mammoth’s return from extinction

The total reconstruction of the late Pleistocene environment cannot be complete without the king of the ice, the woolly mammoth. The idea of resurrecting these ancient pachyderms by extracting DNA from frozen carcasses and injecting it into the eggs of Asian elephants is being considered as a strong possibility. The de-extinction of a species that disappeared approximately 3,700 years ago could certainly generate an ethical dilemma, but it wouldn’t be an impulse or a publicity stunt, the woolly mammoth would actually be a crucial factor to complete the transition towards the grassy steppes of years passed. Mammoths used to knock down trees and and encourage the growth of the northern grasslands, similarly to what elephants do nowadays. In 2017, Geneticist George Church declared he could create a hybrid elephant and mammoth genome in a couple of years. We asked Nikita Zimov if we one day we could actually see mammoths roaming the Siberian steppes. This was his reply: “I will not speculate when this will take place, but I don’t think there are any unsolvable scientific problems preventing us from making it happen.” After all we wouldn’t have to recreate actual mammoths, that were members of the elephant family that had adapted to cold temperatures, it would be “enough” to modify the genes of modern elephants, just like nature had modified the genes of their ancestors hundreds of thousand of years ago.

The last Siberian bison was killed around 10,000 years ago, today, thanks to the efforts of Nikita Zimov and his father, these powerful herbivores have returned to Russia and the idea is to increase their population. Twelve bison calves will be flown to Pleistocene Park from Alaska next month. The two scientists launched an IndieGoGo crowdfunding campaign in order to finalise this expensive transport operation. This is a solid opportunity to support this extraordinary project and help our planet by fighting climate change.

Pleistocene Park embodies a hope for the future and an opportunity to undo the mistakes of the past, when our species brought too many species to extinction and broke the trophic cascades without ever restoring them. The human population is growing exponentially, but vast areas that cannot be used for agriculture and be rewilded, give refuge to wildlife and store carbon still exist. More than twenty years ago, a man lived on the edge of the world, in the heart of the Siberian steppe had an enlightening idea, “recreating” the Ice Age to slow down the devastating effects of climate change. Today, that idea is continued by his son, and the future of the planet is also in his hands.

Environmental activists have accused Anglo American of deliberately dumping toxic waste that has poisoned thousands of women and children in Kabwe.