A court in India has declared the holy rivers Ganga and Yamuna a legal entity with same rights as a person, in a move that could help in efforts to clean the pollution-choked rivers.

Days after New Zealand granted the Whangui River the status of legal personhood, the culmination of a 140 year legal struggle by the Maori people, a court in India has declared the rivers Ganga and its main tributary Yamuna a legal “person” in a fresh effort to save it from pollution.

Originating in the Himalayas and flowing into the Bay of Bengal in the east, the Ganga or Ganges travels for more than 2,500km through the plains of northern and eastern India, passing through 29 major and 23 small cities and 48 towns. Maa Ganga or Mother Ganga as it is reverentially referred to provides water to and irrigates lands feeding millions of people, making it central to the existence of half of the Indian population.

However the world’s third largest river and the holiest in the Hindu religion is also among the dirtiest in the world, with toxic industrial waste and untreated sewage continuously being dumped into it. In an effort to preserve the river upon which so many depend on a court in India passed a judgment with a potential to become a game-changer in legal enforcement of environmental protection in March.

In its judgment, the first of its kind in India and second in the world after New Zealand, the court stated: “The Rivers Ganga and Yamuna, all their tributaries, streams, every natural water flowing with flow continuously or intermittently of these rivers, are declared as juristic/legal persons/living entities having the status of a legal person with all corresponding rights, duties and liabilities of a living person in order to preserve and conserve river Ganga and Yamuna”.

Thus polluting or damaging the rivers will be legally equivalent to harming a person. The court’s order will allow complaints to be filed in the name of the two rivers and cases can be brought before the courts directly on behalf of the Ganga. This could be a useful tool in fighting actions like dumping of waste in the river, instead of having to show that a human being is harmed because of it. Contamination could be enough to make the case that it violates the river’s “right to life”.

“The Director of Namami Ganga (Clean Ganga Mission), the Chief Secretary of the State of Uttarakhand and the Advocate General of the State of Uttarakhand are hereby declared persons in loco parentis as the human face to protect, conserve and preserve Rivers Ganga and Yamuna and their tributaries,” the court added. These appointed officials or guardians have been ordered to act as legal parents to the rivers, considered minors legally and to defend and represent them.

This judgment gives an impetus to the 3 billion dollar Clean Ganga Mission, Prime Minister Narendra Modi’s ambitious plan that brings together various efforts for cleaning and conserving the river over five years (2015-2020). The ruling gives the Central government eight weeks to set up boards for cleaning and maintaining the rivers. It also means that there will be a uniform set of regulations on maintaining the river that flows through the states Uttarakhand, UP, Bihar, Jharkhand and West Bengal.

The rivers have provided both physical and spiritual sustenance to all of us from time immemorial. Rivers Ganga and Yamuna have spiritual and physical sustenance. They support and assist both the life and natural resources and health and well-being of the entire community. Rivers Ganga and Yamuna are breathing, living and sustaining the communities from mountains to sea. (Indian High Court) 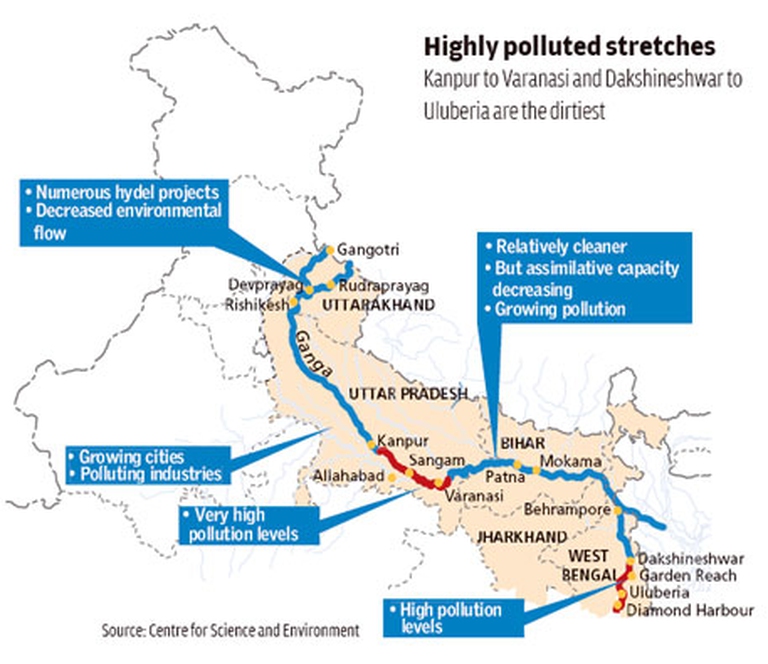 Over 1500 million litres of raw sewage is discharged into the Ganga every day in addition to the 500 million litres of industrial waste dumped by more than 700 highly polluting industries (including tanneries, sugar, pulp and paper and chemical) located along it. The July 2013 report of the Central Pollution Control Board (CPCB) showed unacceptable levels of faecal coliform, a clear sign of human excreta, all along the river’s mainstream. In the upper parts of the river, water withdrawal for hydropower plants has put the river’s health in danger. As the Ganga flows down the plains, water is taken away for irrigation and drinking, so much so that during winters and peak summer months the river goes dry in many parts, and only sewage flows between its banks.

The capacity to treat this sewage is inadequate and the gap between sewage generation and treatment remains the same every year—55 per cent. So even as the treatment capacity is added, more sewage gets added because of population growth. CPCB checked 51 out of 64 sewage treatment plants (STPs) along the Ganga in 2013 and found only 60 per cent of installed capacity of the plants was being used; 30 per cent of the STPs were not even operational.

Even though numerous notices have been previously issued by authorities to take these polluting industries to task law enforcement has failed until now. However in the latest order the court directed the state pollution control board to shut down hotels, industries and ashrams that discharge untreated waste into the river. This is expected to affect over 700 hotels in the tourist areas of Haridwar and Rishikesh alone. The judgment also bans mining in the riverbed of Ganga and its highest flood plain area. These rulings indicate that the court will strictly monitor pollution of the Ganges.

However how this decision will be enforced is unclear. The legal guardians appointed are members of the government. Will they have the independence to appeal against governmental actions like unsustainable canal dredging or mining? Will India’s massive river linking scheme involving the large-scale diversion of water from the Ganga and Brahmaputra basins in eastern India to water scarce regions of western and central India through the construction of reservoirs, dams and canals still be possible? Can a citizen bring a case representing a water body? If so, this can become a powerful legal tool in the hands of communities and activists to safeguard the environment.

Conferring legal rights to a river is just the beginning of a longer process but any step towards converting a stinking sewer to a clean water source is a welcome relief for millions. With states failing to maintain the rivers, it is time the rivers took matters in their own hands.