The Goldman in known as the “green Nobel Prize” © Goldman Environmental Prize
,
by Elisabetta Scuri

They’re often called “heroes”. But, foremost, they’re people. Common folk just like us. They don’t have superpowers or wear capes. And that’s what makes them so special. They’re the activists that are celebrated yearly by the Goldman Environmental Prize, also known as the “green Nobel Prize” due to its prestige. The winners of the 2021 edition are Gloria Majiga-Kamoto from Malawi, Thai Van Nguyen from Vietnam, Maida Bilal from Bosnia and Herzegovina, Kimiko Hirata from Japan, Sharon Lavigne from the United States and Liz Chicaje Churay from Peru. Leaders capable of “inspiring all of us to take action to protect our planet”.

We’d like to leave the world a little better than we found it. 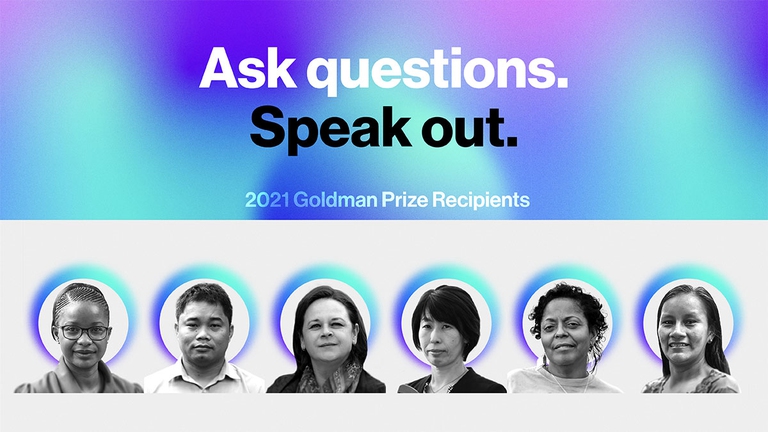 The winners of the 2021 Goldman Environmental Prize

Due to the pandemic, this year’s award ceremony was held online on 15th June, featuring Jane Fonda as host and musical guests Lenny Kravitz, Baaba Maal and the Ndlovu Youth Choir. The young Ugandan activist Vanessa Nakate also had a special message for the audience. Here are the winners of the 2021 edition.

Concerned about the environmental damage caused by plastic pollution in the southeast African state of Malawi, Gloria Majiga-Kamoto decided to fight against this industry by campaigning to stop the production of thin plastics, a type of single-use polymer. Thanks to her campaign a national ban was adopted in 2019. This is the first time a person from Malawi wins the Goldman Prize.

Thai Van Nguyen is the founder of the NGO Save Vietnam’s Wildlife, responsible for saving 1,540 pangolins from the illegal wildlife trade between 2014 and 2020. Nguyen also instituted the first Vietnamese anti-poaching unit. Since 2018, it has destroyed 9,701 animal traps, torn down 775 illegal camps, confiscated 78 guns and brought to the arrest of 558 poachers, leading to a significant reduction in illegal activities in Pu Mat National Park.

Together with the women in her village, Maida Bilal mounted a 503-days-long protest to stop the construction of two new dams on the Kruščica River in December 2018. The Balkans are home to Europe’s last wild rivers, but demand for hydroelectric power is threatening these precious ecosystems. This marks the first time that a person from Bosnia and Herzegovina receives the Goldman Environmental Prize.

After the Fukushima nuclear disaster in 2011, Japan began relying on coal-based rather than nuclear energy. Kimiko Hirata’s decade-long campaign has stopped 13 new coal power plants from being built throughout the country. These would have released over 1.6 million tonnes of CO2 over their lifetimes. Therefore, Hirata’s efforts have avoided emissions equivalent to those of 7.5 million cars a year, for forty years.

In September 2019, Sharon Lavigne, a special education teacher and climate justice advocate, succeeded in stopping the construction of an enormous plastic production plant in Mississippi, in the state of Louisiana. Lavigne mounted an opposition campaign, raised awareness in her community and organised peaceful protests to protect the right of her fellow citizens, especially African-Americans. The plant would have led to the release of huge amounts of toxic waste in an area where pollution is already destroying many lives.

Thanks to Liz Chicaje Churay and her supporters, in January 2018 the Peruvian government created Yaguas National Park, which protects 800,000 hectares of the Amazon rainforest. The park is key to conserving local biodiversity as well as safeguarding thousands of unique species, carbon-rich peatlands and protecting indigenous peoples.

The history of the Goldman Environmental Prize

The Goldman Environmental Prize was created in 1989 in San Francisco, in the US, by the philanthropists and human rights defenders Rhoda and Richard Goldman. It was awarded for the first time in 1990 and the ceremony was held on Richard’s birthday, 16th April. Every year, it recognises six environmental activists who have fought for a particular cause in their countries, one representing each of the planet’s six inhabited continental regions: Africa, Asia, Europe, islands and island nations, North America, and South and Central America. 206 Earth defenders from 92 countries have received the award so far: 92 women and 114 men.

Some examples? Leydy Pech, a Mayan beekeeper in the Mexican state of Campeche, who in 2017 defeated Monsanto, the GMOs and pesticides colossus, when its license to cultivate genetically modified soy in indigenous-held territories was revoked. The Goldman Prize’s goal is to shine a light on the challenges facing the natural world and how, in their infinite diversity, these are all interconnected.

“When it comes to the environment, the global community of grassroots activists, leaders, thinkers and philanthropists is only growing and becoming more sophisticated, more united, more powerful,” says Susie Gelman, vice president of the Goldman Environmental Foundation. “These prize winners have so much to teach us about the path forward and how to maintain the balance with nature that is key to our survival. These phenomenal environmental champions remind us what can be accomplished when we fight back and refuse to accept powerlessness and environmental degradation. They have not been silenced – despite great risks and personal hardship – and we must also not be silent, either. It takes all of us”.

Sometimes we may ask ourselves: “What difference can I make?”. The stories of these ordinary people who have done extraordinary things show us that even small battles can lead to great victories. That each and everyone of us can be a hero. Even if we don’t have superpowers, we have to trust our power to change things. We don’t need to wear a mask to defend what is close to our heart: we can do so holding our heads high.

Paul Sein Twa, winner of the 2020 Goldman Environmental Prize for Asia, has spent a lifetime defending Karen culture in Myanmar and its synergy with nature.