How climate change could transform the world’s wine map

The connection between production areas and the agricultural and cultural identity is critical in transforming an ordinary wine into a world-renowned quality one. Tuscany in Italy, Bordeaux and Rhone in France, the Napa Valley in California and the coastal areas of Chile are just some of the most important regions when it comes to wine production. For centuries these areas have been home to high quality vineyards thanks to unique weather conditions. But things could change and these areas are likely to lose their prestige due to a decline in crops caused by climate change.

The study of the impact of climate change on wine

This scenario is outlined in a study conducted by the NGO Conservation International and published in the journal Proceedings of the National Academy of Sciences. Researchers led by Hannah Lee used 17 different climate models to understand the effects that a warmer climate has on nine major wine-producing regions. 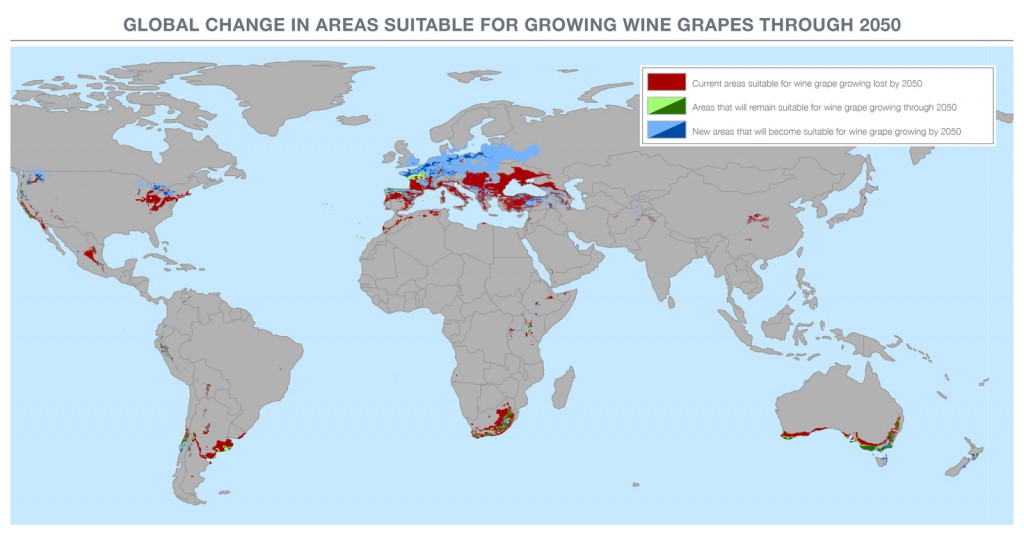 The forecast for the next 50 years were made assuming an average temperature increase of 2.5 degrees (a likely scenario) and 4.7 degrees, the worst case scenario predicted by climate scientists of the United Nations Intergovernmental Panel on Climate Change (IPCC). In both cases, the industry will undergo a revolution in geographic areas where Europe is the main victim of the negative effects of global warming, with an expected drop in production of 85 per cent in the areas bordering the Mediterranean Sea, such as the Italian Tuscan and the French Bordeaux regions. The same fate may also be suffered by the interior states of Australia (-74 per cent), California (-70 per cent), South Africa (-55 per cent), and Chile (4-0 per cent).

“It will be harder and harder to grow those varieties that are currently growing in places in Europe,” Hannah Lee said. “It doesn’t necessarily mean that vineyards can’t be grown there, but it will require irrigation and special inputs to make it work, and that will make it more and more expensive”. This is because mild winters and dry summers will be replaced by a warmer climate, like in North Africa.

On the contrary, climate change may open up new regions of the world to the wine industry. Are you ready to taste wines from Britain or from Tasmania? These, together with the wilderness areas around Yellowstone National Park, in the northern United States, or even some of the highlands of central China, may be areas where the production of quality wines may move within the next 30 years.