Activists protest on 13 December, the last official day of the COP25 in Madrid © Camilla Soldati/LifeGate
,
by Andrea Barolini

The COP25, the most difficult in recent years, ended on Sunday 15 December. Two extra days and nights, on top of the two scheduled weeks, of complex and disarming negotiations brought the UN Climate Change Summit to an end. Few steps forward were made and the many sticking points suggest that shaping international climate action in 2020 will be a long uphill battle.

I am disappointed with the results of #COP25.

The international community lost an important opportunity to show increased ambition on mitigation, adaptation & finance to tackle the climate crisis.

The divide between civil society and governments

“The science is clear, but the science is being ignored”, Swedish activist Greta Thunberg tweeted on Saturday evening. But she added that “whatever happens, we’ll never give up. We’ve only just begun”. However, the sense of disappointment is palpable. As is the enormous divide between scientists’ warnings and civil society’s demands on one side, and governments on the other.

It seems like #cop25 in Madrid is falling apart right now. The science is clear, but the science is being ignored.
Whatever happens we will never give up. We have only just begun. https://t.co/wEFIDLU382

“It had been clear for a few days now that this COP would end in failure – Kyoto Club vice-president Francesco Ferrante commented –.  The political fact that has emerged is that Europe’s efforts alone won’t be enough, even though it has presented the most ambitious document, the Green New Deal. When the only real leap forward was accomplished in Paris it was thanks to the administrations of the US and China. Europe needs to keep hope alive, but the truth is that no progress can be made without the big players”. Catherine Abreu of the Climate Action Network holds the same view: “No clear direction has been given to the parties about the objectives to be achieved next year. The spirit with which the Paris Agreement was approved feels today like a distant memory”.

“The world is screaming out for action but this summit responded with a whisper,” said Chema Vera, interim executive director of humanitarian organisation Oxfam. “The poorest nations are in a sprint for survival, yet many governments have barely moved from the starting blocks. Instead of committing to more ambitious cuts in emissions, countries have argued over technicalities”.

Read more: COP25, a guide to the climate conference in Madrid: 5 things you need to know 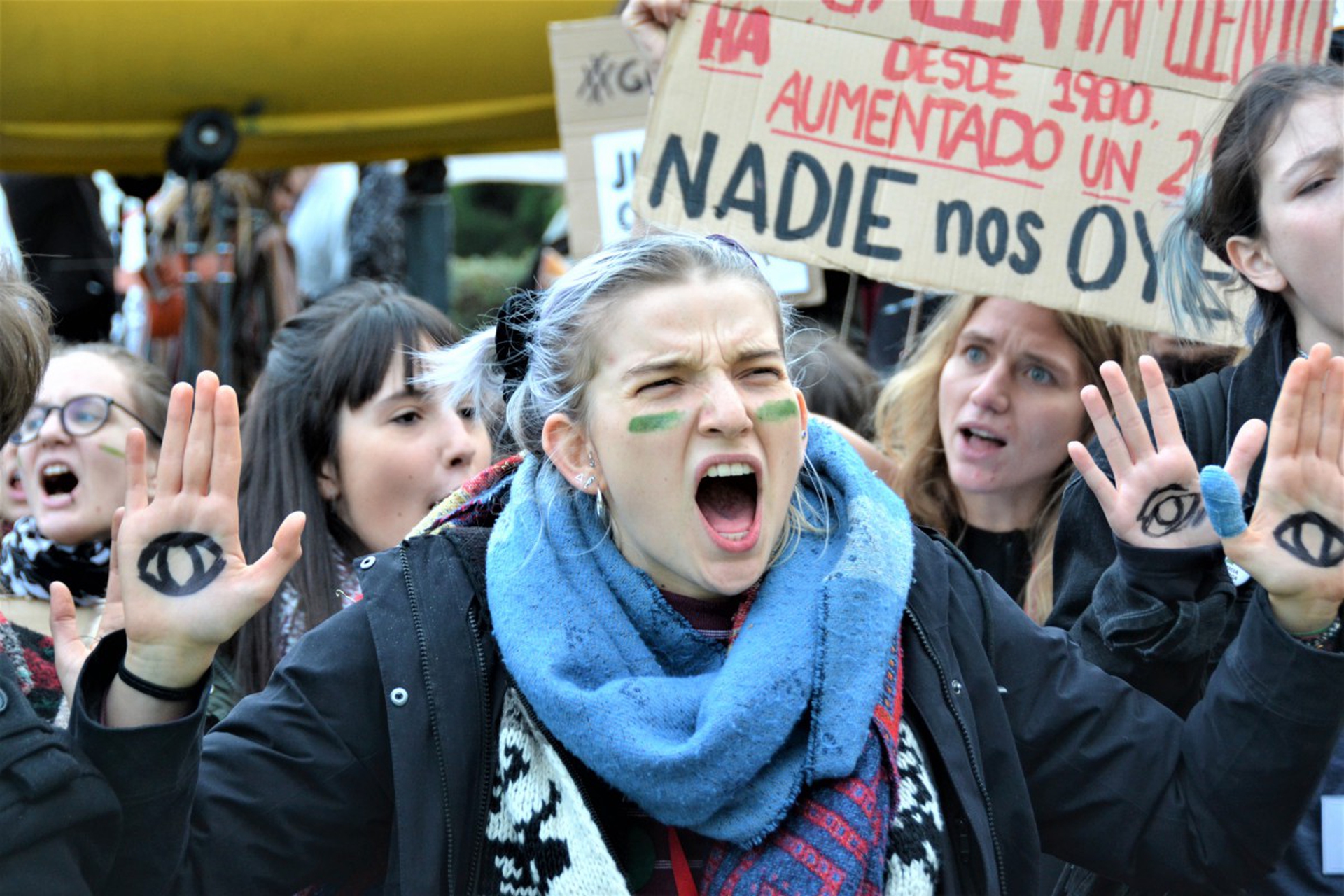 China, India, Brazil and South Africa take a step back

Early on Sunday there were even rumours that there wouldn’t be enough delegates to continue the negotiations, as many ministers had already left in the previous hours. The talks continued, regardless of the difficulties. Starting with the long-running issue of the Nationally Determined Contributions (NDCs): the promises to cut CO2 emissions made by governments all over the world. These were submitted to the United Nations Framework Convention on Climate Change (UNFCCC, which organises the COPs) in 2015. However, calculations made since have shown that even if these commitments were respected, this wouldn’t be sufficient as temperatures would rise well above the maximum 2-degree Centigrade limit, reaching 3.2 degrees.

On the afternoon of Thursday 12 December, during a plenary session, China, India, Brazil and South Africa announced that they’ve already set their climate ambitions as high as they’re willing to go. This, practically speaking, means that the governments of these four large emerging economies aren’t willing to advance new NDCs. This news proved disastrous for the negotiations considering that China and India alone are responsible for over a third of global CO2 emissions. Without them – and with the United States reversing its commitment under Donald Trump – it will be extremely difficult to achieve global climate objectives.

However, some positive news on the NDC front did come out of the COP25: around 80 nations have committed to presenting new promises to cut emissions or have begun discussions on the issue. The problem is that the “weight” of these virtuous states in relation to total global emissions is just over 10 per cent. As expected, neither China nor the US are among these countries, nor is Italy. Although it must be said that Sergio Costa, the Italian Environment Minister, stated clearly to LifeGate that “our country will be there, there’s no doubt about it”.

For the entire duration of the conference in Madrid, delegates clashed on the issue of Article 6 of the Paris Agreement, meant to determine the rules that will govern the new Emissions Trading System. Faced with the impossibility of finding a compromise between all nations, the entire issue has been deferred to the next UNFCCC session that will be held in Bonn, Germany next June.

The article in question is by far the most complex in the treaty (it’s no accident that it was only approved at the last moment during the Paris negotiations). Its aim is to encourage voluntary cooperation among countries in trying to limit global emissions. This is to be achieved through a “mechanism to contribute to the mitigation of greenhouse gas emissions and support sustainable development … under the authority and guidance of the Conference of the Parties”.

This means that a country that reaches or even surpasses its goals can sell the “right to pollute” to other countries. For example, if Nation A promises to cut emissions by 10 billion tonnes of CO2 but actually cuts them by 11 billion, it could sell 1 billion in emission quotas on the international market. These could be bought by Nation B, which wasn’t able to reach its objectives.

This would allow for establishing and enforcing a global emissions limit. In Madrid, however, the world split into different blocks with regards to the rules that will govern the system and in the end, negotiators gave up. This is also because countries like Australia refused to sacrifice their old “carbon credits”, part of the system instituted by the Kyoto Protocol and that might be excluded from a new one linked to the Paris Agreement. “Governments need to completely rethink how they do this, because the outcome of COP25 is totally unacceptable,” commented Jennifer Morgan, Executive Director of Greenpeace. “At COP25 we needed decisions that responded to the demands made by the new generations, having science as a reference point and recognising the urgency of the climate emergency. Climate blockers like Brazil and Saudi Arabia, enabled by an irresponsibly weak Chilean leadership, peddled carbon deals and steamrolled scientists and civil society”.

Human rights at the COP25

The theme of human rights also sparked long discussions. NGOs and civil society were vocal in demanding that respect for human rights be integrated in numerous aspects of the Paris Agreement. “In the last draft of the rules defining the Emissions Trading System – explains Chiara Soletti of the Italian Climate Network – the only mention of human rights was in reference to a non-binding preamble of the Paris Agreement”. Another sore point was the Warsaw Mechanism for Loss and Damage, the transfers of money that richer countries will have to guarantee nations that are poorer and more vulnerable to the climate crisis to help them adapt to its most extreme consequences.

The Spanish government announced the introduction of the Santiago Network, a system aimed at help international organisations and experts provide technical assistance to struggling nations, which was one of the demands made by a group of small island nations. The issue of financing, at the heart of discussions on the topic, remains unresolved. Without sufficient funds it will be impossible for poorer nations to adequately prepare for the effects of climate change.

Perhaps the only bit of good news to come out of COP25 was the unexpected approval of the Gender Action Plan. This voluntary programme is dedicated to promoting the rights of women as well as their representation and participation in climate policy. “After two years of intense negotiations we finally reached an agreement – Soletti explains –. Over the course of COP25, however, we were worried about the sudden removal of references to human rights in the text, even though they were present in the draft approved at COP24 in Katowice. We feared we would reach an agreement with few practical implications, if not that the entire programme would be dismissed”. But in the end the GAP was approved, references to human rights included. And with the addition of the possibility of directly accessing the Green Climate Fund to obtain the necessary financing.

Regardless of this victory, the COP25 has left a huge void in global climate policy that will only be filled if impetus comes from the political world. The US elections in November 2020 will be crucial in this sense, and therefore for the fate of the entire world because if President Trump retains his seat the Paris Agreement might end up a dead letter. Next stop Glasgow, in the United Kingdom, for the COP26.

The COP24 climate conference is taking place in Katowice, Poland with the aim of establishing regulations that will bring the Paris Agreement into effect. And averting a planetary catastrophe.