Rosewood being trafficked at the border between Senegal and The Gambia © Environmental Investigation Agency (EIA)
,
by Luigi Mastrodonato

Senegal, The Gambia and China are caught up in an international scandal that has emerged thanks to a long-running probe into the illegal rosewood trade carried out by the Environmental Investigation Agency (EIA). The story involves armed militias, government authorities and foreign buyers. And it’s accelerating the tragic effects of climate change in West Africa.

Rosewood is the most widely trafficked type of tree in the world, generating over a billion dollars a year. The plant has been classed as endangered in The Gambia since 2012 and is thus protected by several of the nation’s laws, as well as by international agreements such as the Convention on International Trade in Endangered Species of Wild Fauna and Flora (CITES), which bans its export. However, the country still sells rosewood to foreign buyers, a new EIA report, Cashing-in on chaos, reveals.

1.6 million rosewood trees have passed through the hands of Gambian traffickers over the past eight years. The 500 million dollars in revenue generated by this trade, however, aren’t accounted for in the country’s balance sheet. The Gambian economy actually relies quite heavily on the timber trade: in 2017, for example, the latter made up about half of the country’s exports. Yet, as the EIA report shows, there’s a discrepancy between timber imports from The Gambia declared by countries like China and the exports accounted for by the West African country. The difference relates precisely to the trade in rosewood, which Gambian authorities have kept off their accounts.

“Those working in the local timber industry know that involvement in the illegal rosewood trade in the Senegambia Confederation means taking part in one of the region’s largest businesses, which has been going on for a decade now”, explains Kidan Araya, Africa Programme Campaigner at EIA. “Rosewood has also become a means to fund the armed conflict in West Africa and our inquiry clearly establishes this direct link”.

Rosewood trafficking actually begins in Senegal, where trees are felled and from which they’re sold to The Gambia by the Movement of Democratic Forces of Casamance, which uses the profits to fund its fight for independence. The Gambia then ups the price and sells the rosewood to foreign – primarily Chinese – importers.

“This type of wood is especially sought after for its blood-red colour and for the fact that wood merchants consider it a special object, used to create high-value decorative furniture,” Araya continues. “Moreover, our investigations have shown that many Asian buyers are fully aware and complicit in the illegality of rosewood trading. In our most recent report, a Shenzen-based Chinese importer told our undercover investigators that he knew that the timber bought from The Gambia actually came from elsewhere”.

Corruption in the Gambian government

The illegal system is underpinned by traffickers threatening authorities, for example when they’ve tried to put a stop to smuggling in the past, as well as by corrupt politicians. “Rosewood traffickers work within a complex and illicit system that essentially allows trafficking to happen. This has been going on for years, after taking off during Jammeh’s brutal dictatorship,” Araya states. “In particular, some traders have claimed to rely on Lamin Dibba, the Minister for the Environment, Climate Change and Natural Resources, to facilitate the rosewood trade”. 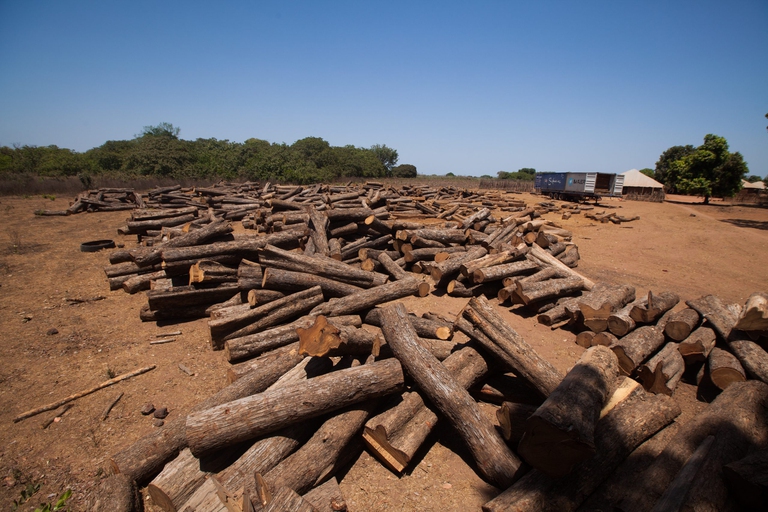 The investigation also reveals that semi-public companies like Jagne Narr are also involved in the traffic, a telling fact in the context of the entrenched corruption surrounding the rosewood trade. It also explains why President Adama Barrow’s attempts to put a stop to it have been unsuccessful. A BBC documentary addresses the topic, including uncovering and filming twelve deposits destined for preparing rosewood for export. When it was published a few months, the Gambian government dismissed the allegations as unfounded and nonsensical.

Rosewood and the climate crisis

Another delicate aspect concerning rosewood trafficking is that the felling of trees in Senegal, the first ring in the smuggling chain, is closely linked with the issue of climate change. The practice is putting already depleted local forests in grave danger, speeding up desertification and soil degradation, already well underway. All of this has repercussions on local populations, making agricultural practices much more difficult, and driving millions of people to abandon their homes and country.