Mahatma Gandhi, the power of nonviolence

Gandhi means grocer, since his ancestors, before fulfilling important positions, worked as spice sellers. He was Hindu and, in particular, he believed in Vishnu.

Mohandas Karamchad Gandhi was born on 2 October 1869 in Porbandar, western India. In the first 20 years of his existence he behaved exactly like a descendant of a wealthy family: High School, College in Mumbai and then he sailed to London to obtain the entry qualification to the legal profession.

After coming back to India, he went to South Africa on business, where for the first time he came to know how Indians were subjugated: he was forced to get down from a train and couldn’t rent a room. 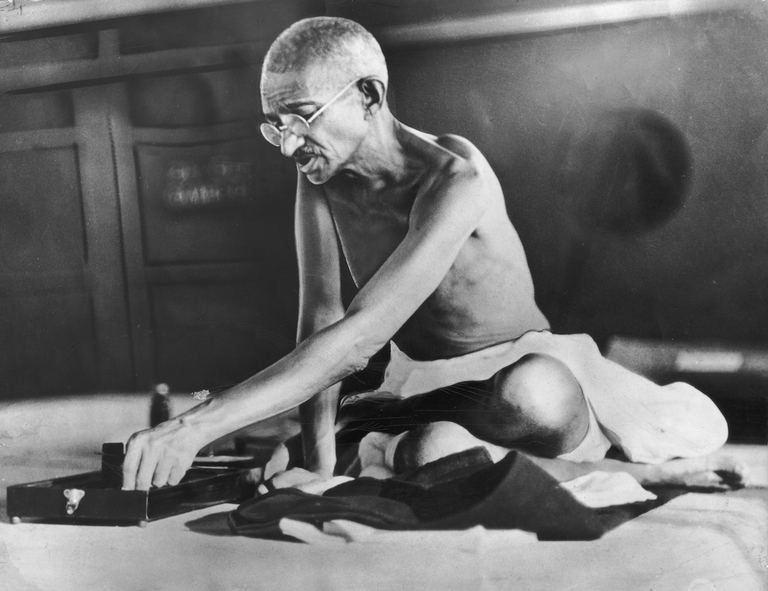 Because of the humiliation he suffered in 1894, when he was 24, he started the Natal Indian Congress, an organization that aimed to fight discrimination against Indians in the Union of South Africa.

By reading many religious texts, he realised that the highest degree of religiousness is sacrifice; that’s why when he was 37 he decided to take vows in agreement with his wife, but against his religion.

In the same period, he started to fast as a means of self-purification and political motivation.

These purification practices are included in his non-violent approach, known as satyagraha, which means truth force and they are the only weapons that it is possible to use; some said that non violence is the weapon of the weak, but Gandhi, on the contrary, used to say: “Non violence is a weapon of the strong”.

He was arrested many times. In September 1906 he led his fellow Indians in a nonviolent protest against the policemen who wanted to keep a file on every one of them and he was put in jail for seven years; between 1921 and 1923, he was again imprisoned because he promoted civil rebellion; in 1930 he was put in jail for one year because he illegally produced salt from saltwater to protest against the government monopoly on salt production.

He supported peace armies during both World Wars, was against the independence of Pakistan from India and wanted Indian religious communities (Hindu and Muslim) to coexist peacefully. That’s why he was assassinated at the age of 78, on 30 January 1948, by a militant Hindu nationalist.

India’s GDP could fall by 90 per cent by 2100 if climate finance isn’t improved. As the country tackles Covid, it mustn’t lose sight of sustainability.

Mega-mergers between multinationals like Bayer and Monsanto threaten citizens’ rights

The world’s biodiversity shouldn’t be in the hands of the few. The EU must say no to mergers between multinationals to protect farmers and consumers. The op-ed by Navdanya International.

As climate change alters agriculture, forest food could be the answer. India’s indigenous Kondhs prove it

India’s indigenous Kondh community has relied on forest food for millennia. As climate change reduces agricultural yields, this source of nutrition could be crucial for food security.

The fraud and corruption witnessed in the illegal introduction of Bt cotton in India are now being repeated with GM mustard. Farmers and our biodiversity were sacrificed for Monsanto’s profits.

If approved, GM mustard would become the first GMO to enter India’s food chain: this is why the fight doesn’t involve India alone but the whole world. The op-ed by the Director of Navdanya International.

India, tribal women are leading the conversion to organic agriculture

Experts urge a shift from conventional to organic farming to combat food shortages due to global warming. Tribal women in India are leading the way.

Indigenous communities in India’s Rayagada district mitigate the challenges of water scarcity by storing rainwater in subsurface soil. A cheap and concrete solution to a global problem.