India’s GDP could fall by 90 per cent by 2100 if climate finance isn’t improved. As the country tackles Covid, it mustn’t lose sight of sustainability.

India’s GDP could fall by 90 per cent by 2100 if current climate financing policies aren’t improved, according to an analysis by global forecasting firm Oxford Economics. The grim forecast relies on capturing the historical relationship between GDP and temperature. Another report by McKinsey estimates that between 2.5 and 4.5 percent of India’s annual GDP could be at risk by 2030 due to climate change. At the moment, sustainable finance is far from sufficient in the country and needs to be scaled up.

India will require 2.5 trillion US dollars from 2015 to 2030, or roughly 170 billion dollars per year for climate action, as estimated in the country’s Nationally Determined Contribution (NDC). Yet, a report by the global analysis and advisory organisation Climate Policy Initiative finds that green finance flows totalled only 17 billion dollars in 2017 and 21 billion in 2018. Sectors like renewable energy, sustainable transportation, including mass rapid transit systems and electric vehicles, energy efficiency and power transmission occupied the bulk of financial flows, while the report doesn’t map pollution abatement activities, biodiversity, agriculture, forestry and other land use, or adaptation finance. Similarly, a report by Standard Chartered notes that India needs 2.64 trillion dollars in investment to meet the UN’s Sustainable Development Goals (SDGs), with investment opportunities for the private sector totalling over 1.12 trillion by 2030. 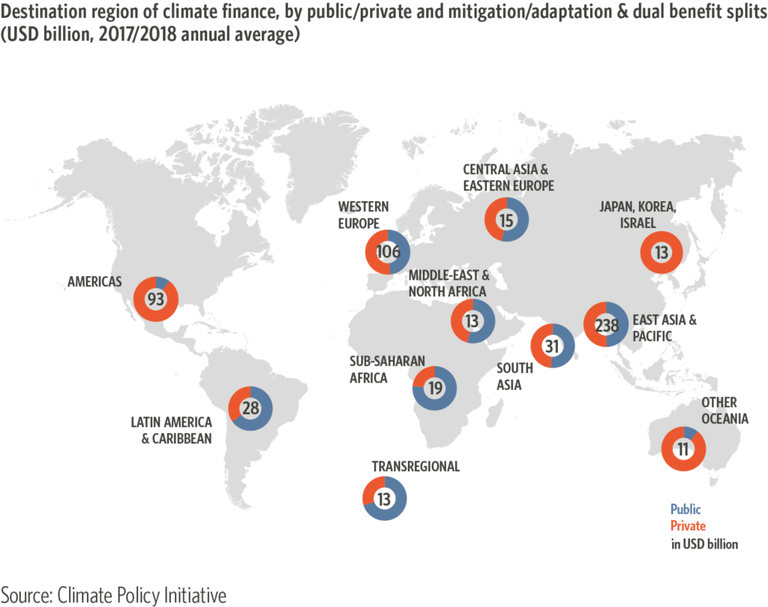 The environmental threat in India

Economic losses between 2008 and 2017 were almost twice those of the preceding decade and at least a third were in the agriculture sector. Damage to food crops is a serious concern as the sector generates almost half of the country’s employment, contributes around 15 per cent to India’s economic growth and provides food security to its 1.3 billion people – yet most farmers aren’t covered by insurance and don’t receive relief for crop damage, making them highly vulnerable to natural disasters.

Apart from weather-related risks, India’s high levels of air pollution, which affect the whole country and its capital New Delhi in particular, cause serious health problems for its citizens. Pollution coupled with the coronavirus pandemic poses a double threat, with a new law to tackle this problem recently being passed. Other issues such as water scarcity, poor waste management, water pollution and deforestation also continue to plague the country.

In the social sphere, notwithstanding India’s efforts, the country continues to position itself at the lower end of the Global Hunger Index, including in 2020 when it ranked 94th out of 107 nations, lower than countries such Bangladesh, Pakistan and Myanmar. The UN’s World Happiness report which measures GDP per capita, social support and life expectancy among other factors, placed India in 144th place out of 153 countries. The country also faired poorly in the Human Development Index: 129th out of 189 countries.

The success of the SDGs as well as climate goals is dependent on how successfully and rapidly developing countries such as India tackle these challenges while also sustaining economic growth. There is an urgent need to collaborate to ensure that adequate long-term financing is provided in a timely and consistent manner for a smooth transition to a low carbon and resilient global economy.

All isn’t lost. Despite inadequate international climate finance, India is the only G20 country whose actions are on track to meet the 2-degree-goal set by the Paris Agreement. In 2020, the Climate Change Performance Index published by Germanwatch categorised India as one of this group of countries with a “high” performance, and commended it on benchmarks such as tackling greenhouse gas emissions, climate policy, energy use and renewables. In contrast, the Climate Action Tracker classifies US, Chinese and the European Union’s efforts as “insufficient”.

According to Indian Prime Minister Narendra Modi, India is well on track to exceed its Paris Agreement commitments and has reduced 24 per cent of its emission intensity relative to GDP from 2005 levels – out of a target of 33 to 35 per cent. The country has witnessed the fastest rate of growth in renewable energy capacity among all large economies. This indicator has increased by 2.5 times, while solar energy has expanded by over 13 times.

It has also made good progress in meeting its renewable energy targets of 175GW by 2022 and 450 GW by 2030. The cumulative renewable power installed capacity (excluding hydroelectric above 25 MW) has more than doubled from 35 GW in March 2014 to 88 GW in August 2020. Around 49.59 GW of renewable energy capacity is currently being installed, and an additional 27.41 GW capacity has been tendered. This puts the total capacity that is already commissioned and in the pipeline at about 166.63 GW. The share of renewables (excluding hydro above 25 MW) in total generation was around 12 per cent in 2019-2020, compared to around 6 per cent in 2014-2015, and it constituted over 24 per cent of the country’s installed power capacity, or 36 per cent when including large hydroelectric sources, with the government aiming at 40 per cent by 2030. India also aims to become a global hub of electric vehicles manufacturing and has launched many schemes to increase sales to meet it target of 30 per cent electric vehicles by 2030.

The rise of ESG and carbon neutral pledges

Statements by India’s central bank, the Reserve Bank of India, in which it acknowledges the severe impact of climate change and the need for a framework to identify, assess and manage risks are encouraging. India is also making significant efforts towards a cleaner use of coal although many coal-fired power plants in India still aren’t taking steps to comply with new emission standards by the extended deadline of 2022. Regardless, in order to be consistent with the Paris Agreement, India must transition away from coal as early as possible. However, the country plans to expand its coal capacities despite risks of them becoming stranded assets.

Today, investors are moving towards companies which have a high Environmental, Social & Governance score.

India already has systems and companies which rank high on this.

India believes in following the path of growth with equal focus on ESG: PM

While India hasn’t yet announced net zero targets such as China, the EU and other countries, some of its top companies are taking the lead. In July 2020, Reliance Industries led by Mukesh Ambani, Asia’s richest man, announced that the conglomerate – which owns businesses across India engaged in energy, petrochemicals, textiles, natural resources, retail and telecommunications – aims for carbon neutrality by 2035. In a recent interview, Ambani mentioned transforming the energy sector to reduce dependency on fossil fuels as one of his desired legacy. IT multinational Infosys also announced that it aims for this milestone 30 years ahead of the timeline set by the Paris Agreement, and Ultratech, India’s largest cement producer, and UPL, the world’s fifth-largest agrochemicals company, have taken sustainability-linked loans where specific environmental targets need to be met for cheaper interest rates.

The Green Climate Fund (GCF) provides support to developing countries in mitigating climate change and adapting to its impacts. It was also stated that “developed countries commit to a goal of mobilising jointly 100 billion dollars a year by 2020″. Yet total pledges to the GCF amounted to a meagre 10.3 billion dollars and finance destined for India amounts to only 177 million dollars, of which only 77.8 million is grant-based.

The true value of money provided by developed countries may be just a third of the amount reported, according to a report by Oxfam, once loan repayments, interest and other forms of over-reporting are stripped out: from 59.5 billion dollars per year on average in 2017 and 2018 to as little as 19-22.5 billion.

The excessive use of loans in the name of climate assistance is an overlooked scandal. The world’s poorest countries, many of whom are already grappling with unsustainable debts, shouldn’t be forced to take out loans to respond to a climate crisis not of their making.

Another potential focus area as suggested in a report by the Asian think tank Observer Research Foundation (ORF) is the establishment of a Green SuperFund to jumpstart green investments by pooling together international and domestic capital. Similar to the rationale behind the Green Investment Bank in the UK, such an institution would “play a dual role in intermediating and mitigating risk for global capital, as well as serving as the entity which identifies sectoral priorities and project pipelines”. An Indian blended finance institution with access to concessionary government and international funds has also been suggested with the goal of reducing risk for projects and driving down the cost of private capital to support the creation of a “green” market.

Will sustainability take a back seat or steer a green recovery after Covid?

Green and SDG-aligned sectors and companies (beyond renewable energy) with the potential to transition the economy should be identified for scaling up. These could include biofuels and other waste to energy sectors, carbon capture and storage technologies, water and sanitation, green infrastructure such as buildings, financial inclusion products for the un-banked, climate-resilient agriculture and food storage, robust crop insurance, and energy efficiencies in micro, small and medium enterprises (MSME).

In next five to six years, MSMEs are envisaged to contribute half of India’s GDP and create 150 million jobs, but these fare poorly on environmental performance, and will experience significant transition risks as the global demand and supply chains shift to more sustainable processes and products. Further, while significant investments are being made in the healthcare and education sectors, these also needs to permeate into rural areas with more affordable offerings.

India will no doubt bring up the issue of inadequate climate finance and technology transfer at the COP26 due to be held in Glasgow in November this year, especially given the financial costs imposed by the pandemic. With India preparing for its G20 presidency in 2023 (swapped from 2022) and its membership to the International Platform on Sustainable Finance, it remains to be seen how ambitious India will be on this front. While reviving the economy and jobs are priorities, India mustn’t lose this opportunity to establish itself as a sustainable finance leader not only to address sustainability and resilience challenges, but also to tap into the 1 trillion dollars in global capital committed to responsible investing.

The European Parliament’s bold plan on the circular economy

We must give back to nature more than we extract. The European Union’s circular economy plan sets the guidelines to embrace this paradigm shift.

Brexit, what it means for EU citizens in the UK and vice versa

Much uncertainty remains in the transition period. Here’s what EU citizens living in the UK, and vice versa, should know about and expect from Brexit.

Will sustainability take a back seat or steer a green recovery after Covid?

We must decide: in a post-Covid world, will we put emphasis on sustainability to achieve a green recovery or dust ourselves off and continue as before?

Businesses should evaluate the risks and opportunities of climate change and its mitigation to ensure their long-term resilience and success.

World Inequality Report 2018. The poor keep getting poorer and the rich richer

Inequality has increased anywhere in the world despite substantial geographical differences, with the richest 1% twice as wealthy as the poorest 50%. The results of the World Inequality Report 2018.

Why mountain areas are essential for sustainable development

Mountain areas are home to around 1 billion people and provide goods and services. This is why the protection of healthy mountain ecosystems has become a must. The op-ed by FAO’s Mountain Partnership Secretariat.