A new study reveals something the world didn’t know: leopard populations have declined significantly. Shattering beliefs that the feline is less endangered than other big cat species.

New research contradicts the widely held belief that world leopard populations remain high compared to other big cats. The species (Panthera pardus) has lost as much as 75 percent of its habitat range, according to the study published in the scientific journal PeerJ. The findings are the result of a three-year effort and provide the first comprehensive assessment of the status all nine leopard subspecies worldwide. What we now know about leopards

The species as a whole has lost between 25 to 37 percent of its historic range. Yet habitat loss has been much more severe in certain areas: up to 98 percent in the Arabian Peninsula, China and Southeast Asia. In the latter region, for example, the leopard is just as endangered as the tiger.

A study suggests that leopards have lost as much as 75% of their historic range since 1750 https://t.co/P9IXlYR5i3 pic.twitter.com/Gc1rBQVIlW

Leopards live in tropical forests, grassland plains, deserts and alpine areas. They can even be found in the vicinity of urban centres. “Occasional, brazen appearance of individual animals within megacities like Mumbai and Johannesburg perpetuates the misconception that these big cats continue to thrive in the wild,” explains Luke Dollar, co-author of the study and director of the National Geographic Society’s Big Cats Initiative.

The research – which gathered 6,000 leopard population records collected over 2,500 locations, analysing 1,300 sources dating as far back as 1750 – challenges conventional wisdom. This being that “leopards remain relatively abundant and not seriously threatened,” in the words of lead author Andrew Jacobson of the Zoological Society of London (ZSL)’s Institute of Zoology, University College London and the Big Cats Initiative. 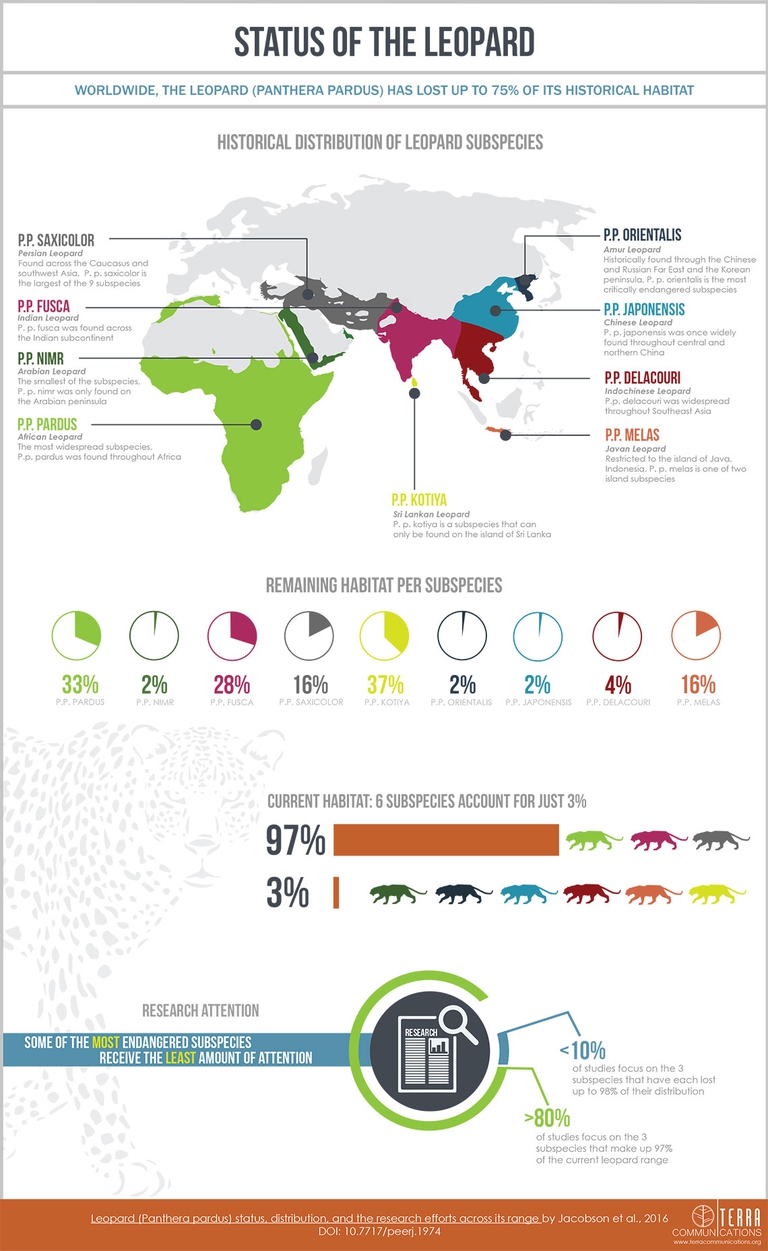 What threats they face

Leopards face threats on a number of fronts. Whilst they’re able to survive even in proximity to human settlements, large swathes of their habitat are being converted into farmland. This means that the spaces, or patches, where leopards live are getting smaller, becoming fewer and increasingly isolated from one another.

The solitary and reclusive animal is also facing outright persecution. As areas dedicated to raising livestock increase to feed growing human populations, farmers kill leopards fearing they will prey on farm animals. Plummeting populations of species that leopards normally prey on may also compound their potential turn to livestock. For example, the incursion of roads, mining and deforestation into African rainforests has increased the reach of wild meat hunting. As humans hunt more wild meat, less is left for leopards to feed themselves.

Hunting for leopards as trophies, allowed in certain countries, or to illegally trade their parts (such as their skins and teeth) is another widespread phenomenon. The effects of such practices are severely understudied and this has led South Africa to impose a ban on leopard trophy hunting for the whole of 2016.

The issue is severely understudied

A complex picture emerges from the study conducted by the Big Cats Initiative, the ZSL, wild cat conservation group Panthera and the IUCN. The survival of the species is facing multiple challenges yet research on the topic remains scant. “The leopard is a famously elusive animal, which is likely why it has taken so long to recognize its global decline”, according to Jacobson. Furthermore, the studies that exist focus on the most populated subspecies rather than those that are most severely threatened, such as the Javan (P. p. melas) and Sri Lankan leopards (P. p. kotiya).

Photo by @argonautphoto (Aaron Huey). #Leopard skin and bark in the #MoremiGameReserve, #Botswana. Shot on assignment in the #OkavangaDelta. Check out video of this same leopard eating an Impala later that night at @argonautphoto A photo posted by National Geographic (@natgeo) on May 3, 2016 at 1:29pm PDT

Some fragile shreds of good news emerge from the paper. In the Caucasus Mountains, far-eastern Russia and northeastern China leopard populations – whilst having faced historic declines – are stabilising and even rebounding. However, this is an isolated cause for celebration in the context of a steep, complex and understudied decline in world leopard populations.