Doomsday Clock, in 2015 it’s only 3 minutes to the end of the world

The Doomsday Clock strikes only 3 minutes to humanity’s midnight. And it’s all on climate change and nuclear weapon modernisation.

The last time the Doomsday clock has been moved dates back to 2012. 3 years ago, the scientists of the Bulletin of the Atomic Scientists, non-scientific magazine founded in 1945, said to stop the Earth’s time at 11:55 p.m., only 5 minutes to the end of the world (midnight). 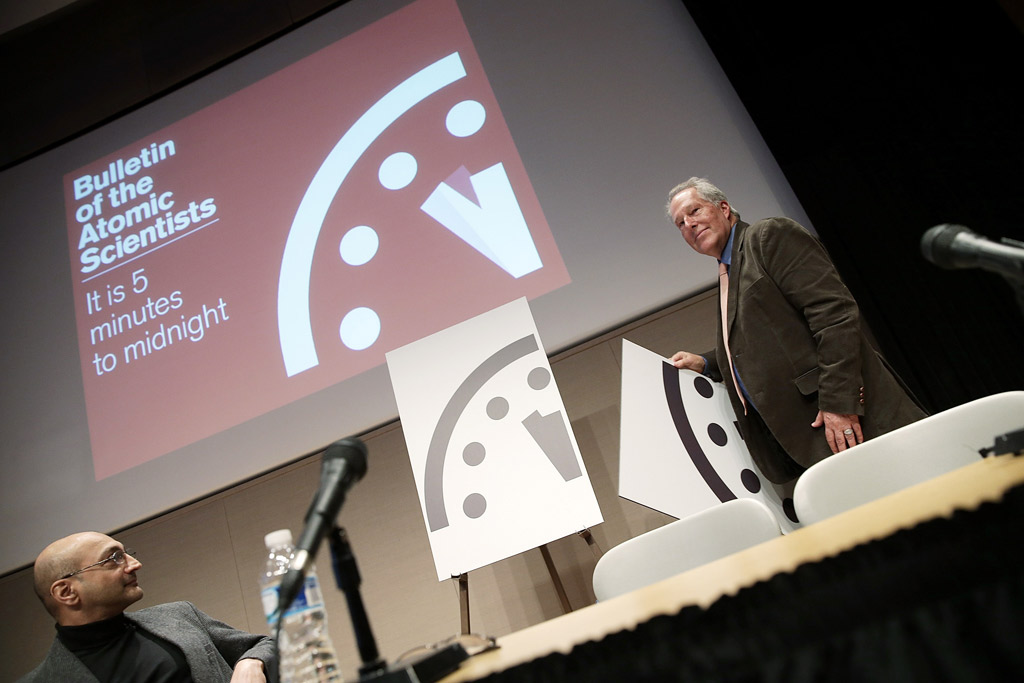 It is 3 minutes to midnight. Today, those scientists moved the clock 2 minutes forward, at 11:57 p.m., only 3 minutes to the Apocalypse. It is the darkest time since 1953, when the clock stroke 11:58 p.m., because in 1952 the United States tested the first thermonuclear device whilst the Soviet Union tested for the first time the atomic bomb.

The decision to move the Doomsday Clock 2 minutes forward in 2015 is due to several reasons: uncontrolled climate change, global nuclear weapons modernizations, and outsized nuclear weapons arsenals. These are undeniable threats to the continued existence of humanity and world leaders have failed to act with the speed or on the scale required to protect citizens from potential catastrophe.

Climate change: the greatest threat. According to scientists, the climate change issue is tackled in an inadequate way to prevent global warming. A climate catastrophe looms over, but it is not inevitable. 2014 has been the hottest year, since the start of measurements 134 years ago, and 9 out 10 of the warmest years have been registered after 2000. However, the Intergovernmental Panel on Climate Change (IPCC) published a report in November with possible solutions the international community to adopt in view of the next climate change conference to be held in Paris (COP 21), in order to avoid the worst scenario in terms of global average temperature increase. Thus the clock is now 3 minutes to midnight to remind the heads of government that they are failing on their duties.

A little bit of history. The Bulletin of the Atomic Scientists was founded in 1945 by some researchers of the University of Chicago. Two years later, in 1947, the magazine gave life to the Doomsday Clock, playing that midnight was the Apocalypse. The aim was to warn the American and Soviet superpowers about the possible nuclear catastrophe in a time when the arms race was almost uncontrolled. The decision of moving the clock forward or backward is made every year by the magazine’s commission, together with a group of consultants including 17 Nobel Prizes. Today, the Doomsday Clock is recognised to be a plausible indicator of the the possible catastrophes caused by nuclear weapons, climate change and new technologies.

Anote Tong. It’s not just the climate that’s at stake, it’s the future of a generation

Saving the future of humanity is a feasible challenge according to Anote Tong, former president of Kiribati and now climate activist. Because not only is the future of the Earth’s climate at stake, but so is an entire generation of young people that have done nothing wrong. Take a grandfather’s word.

What role governments, NGOs, people and gender play in climate change action. We spoke to Jennifer Morgan, Executive Director of Greenpeace International, about what the COP23 being held in Bonn is all about.

“We need to become the hope”, Eskimo shaman Angaangaq on the spiritual significance of climate change

We talk to Angaangaq Angakkorsuaq, an Eskimo Elder and shaman from Greenland, about the spiritual significance of climate change: “You have a beautiful spirit and you’re worth doing something for”.

10 places to visit before they disappear

Here are the 10 most beautiful places in the world to visit before human blindness wipes them out.