A concentrated solar power plant in Morocco, in Ouarzazate, will be the vastest in the world. It will supply energy to 1 million people for 20 hours a day.

Located outside the city of Ouarzazate, the plant will have a surface area equivalent to that of Morocco’s capital, Rabat and will generate 580 megawatts (MW) of electricity, the BBC reports. It employs a large number of moveable mirrors that can follow the sun’s path and harness sunlight to melt salt contained inside the structure’s circuit. The molten salt stores energy and can be used to power a steam turbine, allowing for energy production even at night.

“You have 35 soccer fields of huge parabolic mirrors pointed to the sky which are moveable so they will track the sun throughout the day,” said Paddy Padmanathan of Saudi-owned ACWA Power, which is running the project. The plant’s first phase, Noor 1 will soon be functioning, storing solar energy in the form of heated molten salt for three hours after the sun sets. The Noor 2 and 3 plants, expected to go live in 2017, will store energy for up to eight hours.

Morocco is 98% dependent on imported fossil fuels, making the $9 billion solar thermal project all the more promising for the North African country. According to the World Bank the Ouarzazate plant will reduce Morroco’s energy dependence by about two and a half million tonnes of oil. It is expected to reduce the country’s carbon emissions by 760,000 tonnes per year, translating into a reduction of 17.5 million tonnes of CO2 over 25 years. 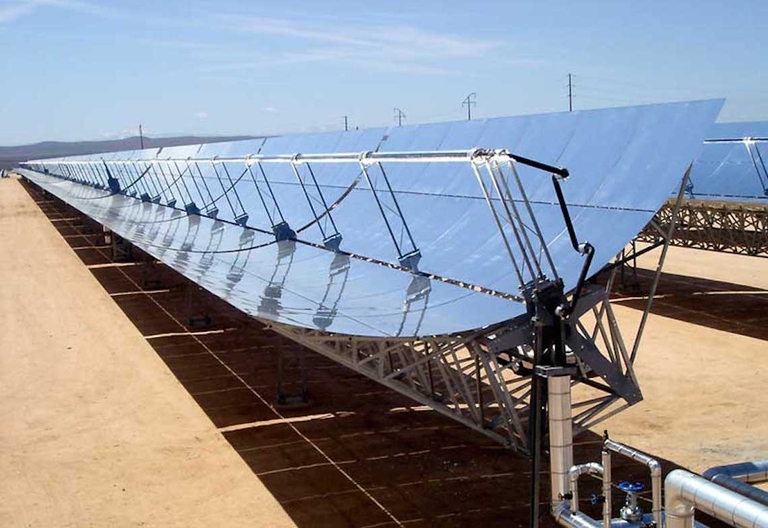 Overall, Morocco has pledged to decrease emissions by 32% by 2030, conditional on aid to reach its targets for the adoption of renewable energy sources. In fact, it has an ambitious renewable energy generation goal of 42% by 2020 – one that outshines those of richer and more developed countries. For example, President Obama has set a 20% target by 2020 for the United States, the same objective adopted by the European Union.

Morocco, with its endless expanse of sunny deserts, is poised to become a solar superpower. The country has one of the highest rates of insolation in the world, receiving around 3,000 hours of sunshine annually.

For more information visit Behind Energy