Bargny, a city fighting for its life against industrialisation and climate change

In a municipality on the outskirts of Dakar, Senegal, threatened by climate change and unchecked industrialisation, activists are fighting to not disappear.

Bargny is a settlement of 70,000 people, arising from an ancient fishing village founded by the Lebou ethnic group. It’s 35 kilometres south of Dakar, the capital of Senegal. The town, which was once a small coastal paradise that foreign tourists often visited, has now been absorbed into the capital’s periphery and transformed into a polluted industrial suburb.

“It’s like they want to erase Bargny from the map. They ask us to make sacrifices without giving us anything in return,” says Cheikh Fadel Wade, standing on the roof of a building surrounded by a concrete-filled, dusty neighbourhood. Cheikh coordinates the communities in Bargny that are under threat from evictions and pollution. He knows how much its people have suffered more than anyone. “It’s a long process of wearing people down. They gradually took everything from us: work, living space, health. We got nothing in return. There’s only one medical centre in Bargny, even though they’re forcing us to live in a polluted area”.

Confiscated land, resource depletion, environmental pollution, and loss of livelihoods such as fishing and agriculture. All in the name of the capital city’s development. These effects, full-blown by now, have been going on for years, afflicting a community that’s fighting not to disappear.

It’s like they want to erase Bargny from the map.

In recent years, threats have increased due to a series of projects launched by the Senegalese government as part of the Sénégal Emergent plan wanted by President Macky Sall. This ambitious programme aims to make Senegal emerge on the global economic landscape by 2035 through the adoption of forms of development linked to modern infrastructure, industrial and urban hubs, and attracting foreign investment. Appealing promises and seductive ideas that are not without their consequences, as demonstrated by the case of Bargny, where the population was initially left out from decisions related to their rights, and ended up being considered almost as an obstacle to the country’s ambitions.

Bargny is a city under siege

Bargny is “besieged” from every direction. Northwest of the settlement is Sococim, one of the largest cement works in Western Africa. It opened for production back in 1948, still in the colonial era, and went on to massively increase its activity, reaching 3.5 million tonnes of cement per year and expanding its quarries, taking over 462 hectares of what used to be farmland. The imposing structure causes elevated CO2 emissions into the air, as well as spreading massive amounts of dust throughout a densely populated area.

To the northeast, Senegal’s government gave the go-ahead in 2014 to huge construction works to build the large urban centre of Diamniadio, halfway between Dakar and Blaise-Diagne international airport. The development is served by a new motorway and the Dakar-Diamnadio electric railway (TER). This is president Sall’s flagship project, made up of residential and administrative buildings, conference halls, stadiums, and hotels that are all clearly meant for wealthier citizens and foreign investors. The construction site covers 1,644 hectares of arable land, 70 per cent of which was expropriated from the municipality of Bargny and its citizens. According to the government’s plans, the hub is just the beginning of a great city in a utopian Senegal, which currently suffers from economic and social uncertainty and saw violent protests erupt within its borders in recent months. 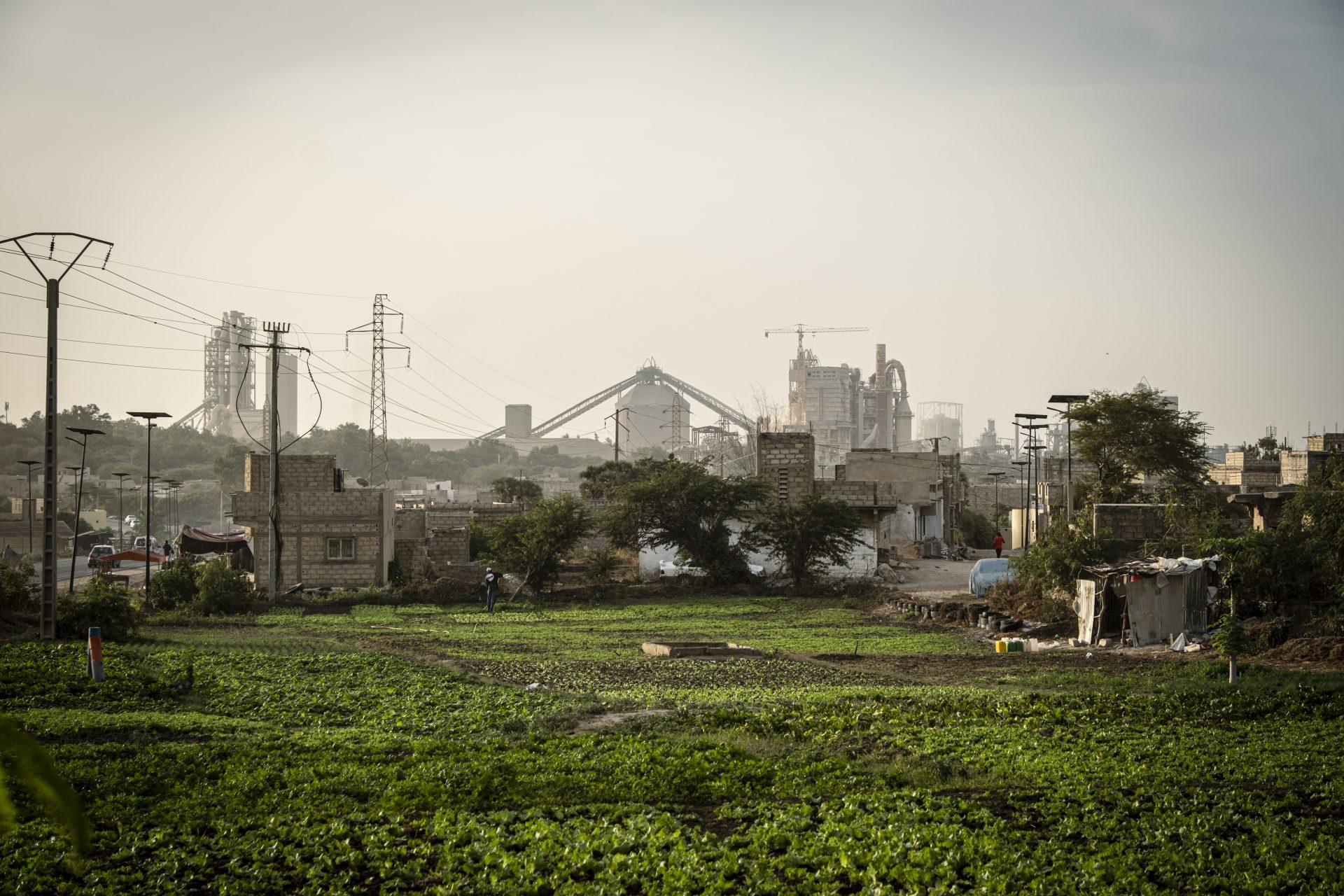 However, the most damaging development projects for the Bargnois and the environment are advancing from the southeast. Foremost among these is the controversial 125-Megawatt coal power plant called Sendou I. This project, anathema to any vision of sustainable development, was launched back in 2008 after questionable environmental impact studies and significant funding also coming from the African Development Bank (AFDB).

The extremely polluting plant, set to be located less than 500 metres from homes and public buildings – in clear violation of current Senegalese law (as, after all, is the aforementioned Sococim) – caused the wrath of the entire community. Legal action was able to block the start of operations, saving production centres like the nearby women-led fish smokery.

However, the nightmare did not end there, because the government recently announced that the structure is to be converted into a gas power plant. In the same direction, the entire area is under threat from heavy industry, because another 100-hectare plot is set to be the site of a new, highly polluting metalworks centre called Tosyali, with backing from Turkey. Work is set to commence in November.

Furthermore, not far from the power plant, construction began a few years ago on the Bargny-Sendou mining port hub. Set to become the management centre for the country’s oil and mining products, the 520-million-dollar project is set to be delivered by 2022. Even this project, which led to further expropriation of land in the Côte Bargnoise, is a major threat to fishing (one of the most important sectors for the livelihoods of millions in Western Africa). And this is just the beginning of an even more ambitious and potentially impactful plan. The gargantuan deep water port in Ndayane, covering 1,200 hectares not far from Bargny, is part of the government’s plan to relaunch Dakar as a trade hub for the continent, taking on millions of dollars in debt and gravely endangering local communities and the marine ecosystem in the region.

The threat of climate change

As if all this weren’t enough, rising sea levels due to global warming have, over the years, brought another threat to the people of Bargny, this time from the southwest. For years, coastal erosion has been destroying the homes of fisherfolk in the Miriam quarter, the oldest part of the settlement. Hundreds of people have been left homeless. The Senegalese government has promised multiple times to intervene and rehome these citizens, but never actually followed through. The only time progress appeared to be made was in 2007, when agreements were signed to build Miriam I and II across 1,433 plots of land where affected families could be rehomed. However, it will come as no surprise that, just two years later, President Abdoulaye Wade destined that same area to the coal plant instead.

Bargny’s recent history is full of injustice and its communities seem trapped in a lethal vice. However, several activists, driven by a survivalist spirit and supported by the population, keep fighting for the rights of its inhabitants. Cheikh Fadel Wade and other militant citizens organise protests and international legal actions that have had great success.

“We Bargnois understood that we couldn’t wait and do nothing, because the development plans they had in mind didn’t include us. So we got to work, turning to foreign stakeholders and the people funding these projects so we could spoil their plans,” Wade states as he tidies up some folders on his desk. “It worked with the coal plant, and I think will work again”.

Young activists fighting not to disappear

Despite having reduced means, it is also and primarily young generations to have taken action when they started to feel their future was under threat. Young rapper Diarra Cissé – a.k.a. “Sister Lydia” – is a great example of this. For years, she has decried all the injustice and raised awareness among the population through her music and the small radio-TV station SLTV-Bargny, which she manages alongside other young Bargnois.

“With these new forms of activism, we can achieve a lot of results. Young people have woken up and we want the government to feel this,” Cissé explains while intent on preparing the next live music show with some guests that have been invited to discuss the latest local news. “I’m proud of my city and its history. I don’t want it to disappear forever below the dust and toxic fumes”.

The case of Bargnu and its activists demonstrates how the fight against the climate emergency and pollution must start, first of all, from a radical revolution of the outdated and unsustainable development models that keep being applied in emerging countries due to the lack of aid and viable alternatives.

Read more on these topics: Environment

A happy ending to the saga of the Keystone XL pipeline

A decade on, the Keystone XL pipeline has finally met its end, signalling that there’s no room for oil in the energy transition.

Our Wild Calling, a book that beckons us to reconnect with nature

Through stories of encounters between humans and animals, Our Wild Calling offers a way out of an age of solitude. We speak to author Richard Louv.

Filastine & Nova, sailing across the world to share music and environmentalism

Survival, multiculturalism, plastic islands. Musician Grey Filastine recounts his adventure aboard the Arka Kinari, which set sail in 2019 and spent much of last year adrift in the Pacific because of the pandemic.