China, India, Japan and South Korea are leading in the use of financing mechanisms such as green bonds to tackle key sustainability challenges.

In a region grappling with excessive pollution and greenhouse gas emissions, climate change-induced droughts and floods, exacerbated by high coal-fuelled energy consumption, countries in Asia are exploring innovative clean and green financing products such as green bonds to move towards a sustainable, low carbon economy.

As much as 7 trillion US dollars will need to be spent building new infrastructure around the world that will make it possible to cut carbon emissions over the next 15 to 20 years. (Mark Carney, Bank of England Governor)

What are green bonds?

A bond is a debt instrument with which an entity (government, multi-national bank or corporation) raises money from investors. The bond issuing entity gets capital while the investors receive fixed income in the form of interest. A green bond is very similar. The only difference is that the issuer of a green bond publicly states that capital is being raised to fund “green” projects, which typically include those relating to activities such as renewable energy, clean transportation and sustainable waste management.

Globally, over the eight years since the first green bond was issued, there has been an increase in participation by the corporate sector with 42 billion US dollars (USD) in bonds issued in 2015; almost four times the 2013 issuance of USD 11 billion. 2016 is set to continue this sustained growth, with issuance topping USD 55 billion by the end of September. Analysts’ forecasts predict stronger future growth especially after the adoption of the COP21 Paris Agreement and the need for (climate) finance for its success, especially in Asia. Thomson Reuters data shows exponential growth in supply from the Asia-Pacific, with USD 498 million issued in 2013, 538 million in 2014, 2.8 billion in 2015 and 8.4 billion so far this year.

The benefits of green bonds

Green bonds enhance an issuer’s reputation as they aid in showcasing their commitment to sustainable development. They provide access to a specific set of global investors who are inclined to invest in green ventures, which they otherwise may not be able to tap into if holding a regular bond. Although criticisms are levelled, for example that the proceeds can be misused and projects financed by the bonds may not be “green” enough, two standards are set in place to ensure credibility: the Green Bond Principles (developed largely by large banks through the International Capital Market Association) and Climate Bonds Standards (developed through the Climate Bonds Initiative, an investor focused non-profit).

A spotlight on Asia

The Asian market for green bonds is dominated by China, South Korea, India and Japan. 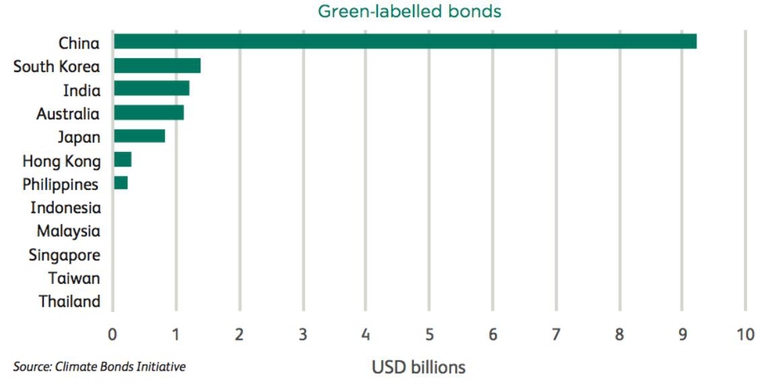 It is estimated that China needs USD 300 billion to achieve its environmental targets under the 13th Five Year Plan (2016-2020) and the Chinese government has established the Green Financial Task Force to promote green bonds, amongst other things. In the first half of 2016, Chinese-funded entities (governments, banks and companies) issued USD 11.2 billion (75 billion yuan) in green bonds, 33 per cent of the global total during that period. In order to give impetus to green financing, the People’s Bank of China (the central bank and regulator) also released a statement on issuing green bonds and listed the types of projects to be supported through them. The list includes six major categories: energy-saving, pollution, conservation and reuse of resources, clean transport, clean energy, protection of ecosystems and adaptation to climate change.

With steep and ambitious Intended Nationally Determined Contribution (INDC) targets set to meet COP21 decarbonisation commitments and costing at least USD 2.5 trillion to implement, India needs to look at innovative financial models to be able to meet these goals. It saw its first green bond issued in 2015 by Yes Bank (USD 250 million) and in 2016 its first certified climate bond issued by Hero Future Energies (USD 44 million) to fund wind energy projects. Some of the other green bond issuers include EXIM Bank (USD 500 million), which was oversubscribed over three times showing tremendous interest among investors, Axis Bank (USD 500 million), which was listed on the London Stock Exchange, and India’s energy producer NTPC which launched a USD 300 million bond to finance renewable projects using its fossil fuel balance sheet. In order to maintain the credibility of the bonds, the Securities and Exchange Board of India (SEBI), the securities market regulator, also issued green bond listing requirements, emphasising disclosure requirements in particular.

Finance is key to overcoming Asia’s environmental and social challenges and implementing the promises made through the Paris Agreement. Green bonds have been a welcome addition to Asian economies’ mainstream financial mechanisms as they provide funds for clean and socially beneficial projects that not only sustain robust economic growth but also contribute to the decarbonisation of their economies.