Eradicating world hunger, for good. This is the heartfelt plea launched from Expo Milano 2015 during the World Food Day – this year marking the 70th anniversary of the foundation of FAO. It has been one of the most important events of the world’s fair, with the participation of delegations, international leading figures and institutions during the day dedicated to #zerohunger.

The President of the Italian Republic Sergio Mattarella opened the event: “Feeding the Planet means peace”. The 2015 edition of the WFD is dedicated to “Social Protection and Agriculture: breaking the cycle of rural poverty”. “We are facing the dramatic need of improving conditions in the countries of origin – adds Mattarella talking about migrations – through interventions that consider the need of social protection and sustainable development, whilst fighting mistrust and dereliction”.

The Italian President cites the new Sustainable Development Goals, i.e. the international commitment aimed to reach economic, social and environmental sustainability. “I hope that Expo Milano 2015 is a sign that a new path could be shared. By 2030, we must implement a development model based on fairness, social solidarity and sustainability”.

“Agenda 2030 is ambitious and achievable. It is integrated and universal. It recognizes that poverty and hunger have complex and interconnected root causes. We made our promise. Now it is time for action,” said the Secretary-General Ban Ki-moon in his address. “We will never realize our vision for sustainable development without rapid progress towards ending hunger and undernutrition. Social protection, our theme for this day, reaches the most vulnerable group of people”.

The UN Secretary-General emphasises the importance of women empowerment and the support to small farmers, and condemns one of the major current paradoxes: “Our future is affected by food waste. Food waste and loss are a shame. We have to work across all the sectors of our life to deliver on the totality of 2030 Development Agenda. We must eradicate hunger for good,” he concludes. 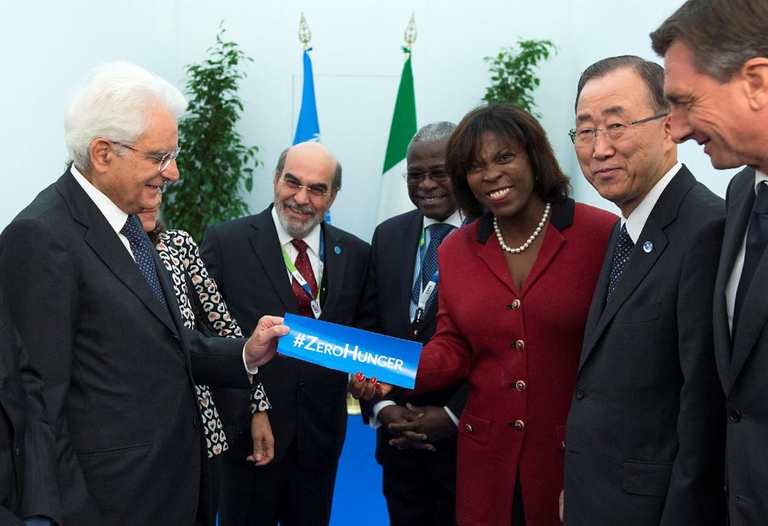 José Graziano da Silva, Director General of FAO said: “Food security and nutrition contribute to peace and stability. Hunger and malnutrition are the greatest injustice of our time. 73 countries out of the 129 developing nations monitored by FAO have already achieved the goal of halving the proportion of hungry people. However, we have seen a rise in obesity and other forms of malnutrition. Success not only depends on governments, but on each of us. I call on all commemorating the World Food Day to make your personal commitments, for instance to eat healthily, cut food waste and help others”.

Pope Francis also launched a plea: “Hungry people’s conditions show us that we cannot just content ourselves with generalized appeals for cooperation.” And he asked a fundamental question: “Is it still possible to conceive a society in which resources are controlled by a tiny minority of people, while the less fortunate are left to pick up the crumbs?“

“The answer lies in social peace, in the stability and security of a certain sense of order which depends on fair distribution policies,” concludes the Pope. 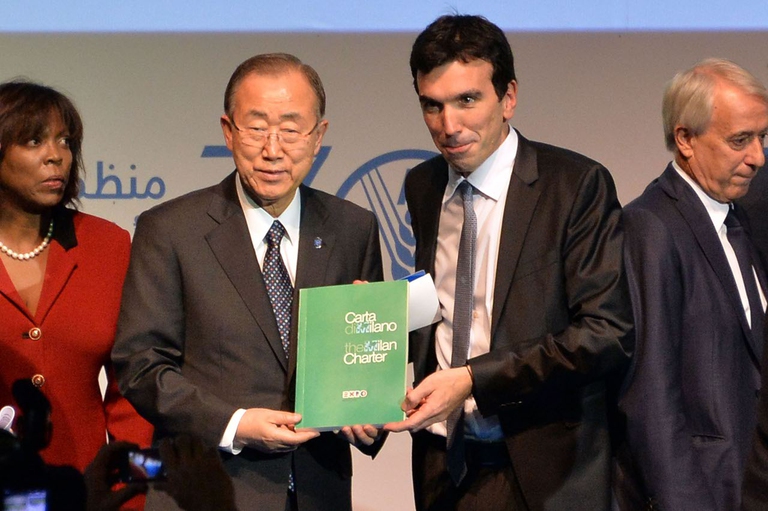 The Italian Minister of Agriculture, Food and Forestry Policies Maurizio Martina underlined Expo’s success: “Expo is an event which has shown itself capable of awakening the interest and the curiosity of millions of people. And today we are more aware than yesterday of the issues of food, thanks also to Expo, a laboratory of citizenship and collaboration, a space for global discussion”. He concluded: “We will do battle every day to ensure that the Expo generation becomes the zero hunger generation.”

Imagine a night in 2030. Imagine that night, that very special night, when no child, anywhere in the world, goes to bed hungry. Ertharin Cousin

Ertharin Cousin, Executive Director of the United Nations World Food Programme (WFP) concludes the event with a hope message: “Imagine a night in 2030. Imagine that night, that very special night, when no child, anywhere in the world, goes to bed hungry”.