What’s happening in Istanbul in the aftermath of the explosion

An explosion in the heart of Istanbul’s Sultanhamet tourist hub, home to the Blue Mosque, killed and wounded tens of people this morning.

According to authorities, the blast killed at least 10 people and wounded 15.

17.27 – Peru’s foreign ministry Ana María Sánchez has declared that a Peruvian man was killed in the blast and a Peruvian woman injured. The other 9 victims were German.

16:52 – The suicide bomber responsible for the blast was not on Turkey’s list of suspected militants. Deputy Prime Minister Numan Kurtulmus said he is thought to have entered the country recently. Authorities said the bomber was a Syrian national, was born in 1988, and a member of the Islamic State. However, the terrorist organisation hasn’t claim responsibility of the blast. 15:18 – At least nine of the victims of the Sultanahmet attack were Germans, according to Associated Press citing Turkish official sources. Turkey’s Prime Minister Davutoglu told German Chancellor Angel Merkel about it earlier in a telephone call.

13:30 – Most of the victims are foreign tourists. Two of the 15 wounded people are in critical state, according to Turkey’s Deputy Prime Minister Numan Kurtulmus.

12:36 – “I condemn the terror incident in Istanbul assessed to be an attack by a suicide bomber with Syrian origin. Unfortunately we have 10 dead including foreigners and Turkish nationals. There are also 15 wounded,” said Turkey’s President Recep Tayyip Erdogan. 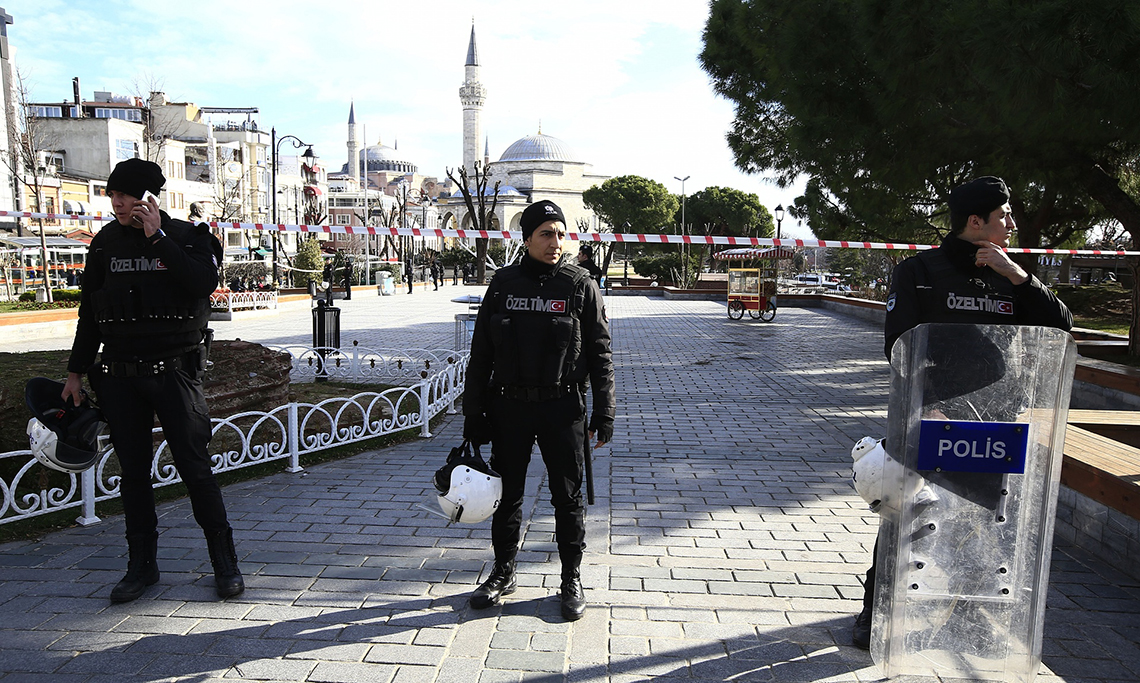 As it has already happened in the past, the government decided to impose a broadcast ban on coverage, contributing to increase uncertainties on the episode. On 10 October, a terror attack killed 97 people in the capital Ankara during a peace rally. On 23 December, another blast killed one person at Istanbul’s second airport Sabiha Gökçen.

Turkey’s Prime Minister Ahmet Davutoglu held an emergency meeting in the capital, according to Humyera Pamuk of Reuters.

Some sources say the blast may have been caused by a suicide bomber, but it hasn’t been confirmed yet. Meanwhile, police forces closed off the surrounding area home to important monuments and buildings, including Hagia Sofia.

Trump to recognise Jerusalem as Israel’s capital, sending a shock to the Middle East peace process

Trump’s decision to recognise Jerusalem, considered holy by three religions, as Israel’s capital has met with a widespread backlash from the rest of the world. Why it’s so controversial.

The state of human rights in 2016, Amnesty International unveils a nightmare global scenario

Amnesty International has documented the state of human rights in 159 countries in 2016. And claims: “The rhetoric of ‘us against them’ is breeding division and fear”.

What is happening in Aleppo, as civilians call on the world to protect them

What is happening in Turkey. National security or clampdown on dissent?

Turkey declares a state of emergency. What this means for the country

The state of emergency declared in Turkey has led, among other things, to the suspension of the European Convention on Human Rights.

Who is Boris Johnson, not a comedian but the UK’s foreign secretary

Th UK’s Prime Minister Theresa May chose Boris Johnson as the country’s foreign secretary. Why was the world so surprised by this decision?

Two journalists reported that the Turkish secret service shipped illegal arms to Syria. They have been sentenced to five years in jail, after a gunman tried to kill one of them outside the courthouse.

Fighting in the Caucasus. Tensions between Nagorno Karabakh and Azerbaijan resume

Turkey arrests 3 academics for advocating peace with the PKK

Three academics have been jailed for signing a petition asking to resume negotiations with the Kurdish population. Human Rights Watch: “Yet another attack on freedom of speech in Turkey”.