Thom Yorke and Patti Smith at Pathway to Paris concert

Thom Yorke and Patti Smith will play live at the Pathway to Paris concert, which will be held in December parallel to the United Nations Climate Change Conference, COP21.

The United Nations Climate Change Conference (COP21) will be held in Paris from 30 November to 11 December in Paris. It will represent an important opportunity for international debate, aiming to establish agreements between countries to limit and reduce CO2 emissions in the atmosphere and fight climate change (for further information read: What is COP21 and why it is so important).

At the same time as this important international event,  Pathway to Paris movement announced that a great concert will take place on 4 December at Paris Trianon Theatre and will aim to raise public awareness on the vital importance of climate safeguard.

Pathways to Paris is an initiative working in cooperation with 350.org, a global movement in support of climate, and unite musicians, artists, activists, politicians and innovators in a series of events ending with the great concert in Paris.

Artists who will play live at the concert include Thom Yorke, Patti Smith, Flea and Dhani Harrison and among the speakers there will be also Bill McKibben, Naomi Klein and Vandana Shiva. The sale of the tickets for the concert will start in September and the proceeds will be donated to 350.org. 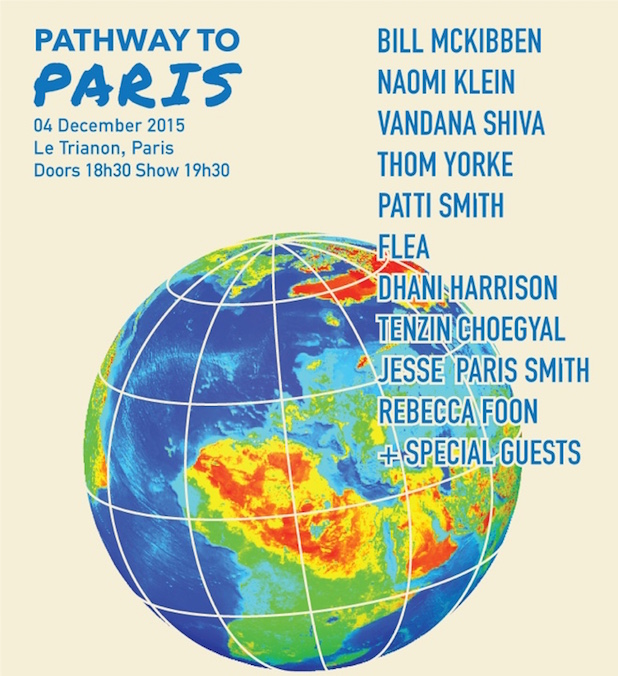 We couldn’t be more ready to rock. Music has always been a critical part of 350.org, from the songs that we sang around the world during our first major day of action back in 2009, to the chants that we’ve shouted out in the streets of New York (and a thousand other cities) during the People’s Climate March last year. As we gear up for a busy few months of action around the Paris Climate Talks, we’re thrilled to have the partnership of some of these incredible musicians to drive us forward. […] Rock on!