Following the example of Bogotá and Medellin in Colombia, Ecuador’s capital Quito is home to Ciclopaseo, a 30 km route closed to car traffic.

Cycle mobility is expanding in South America too. Ciclopaseo in Quito, the capital of Ecuador, is a remarkable example of such expansion. Ciclopaseo is a project supported by Ciclòpolis, a local association aiming to foster urban cycle mobility and sustainable transport in Quito. It is a route of 30 km stretching from the north to the south of the city, where the old airport is located, in which car traffic is closed every Sunday from 8 a.m. to 2 p.m., in favour of bikes and pedestrians. 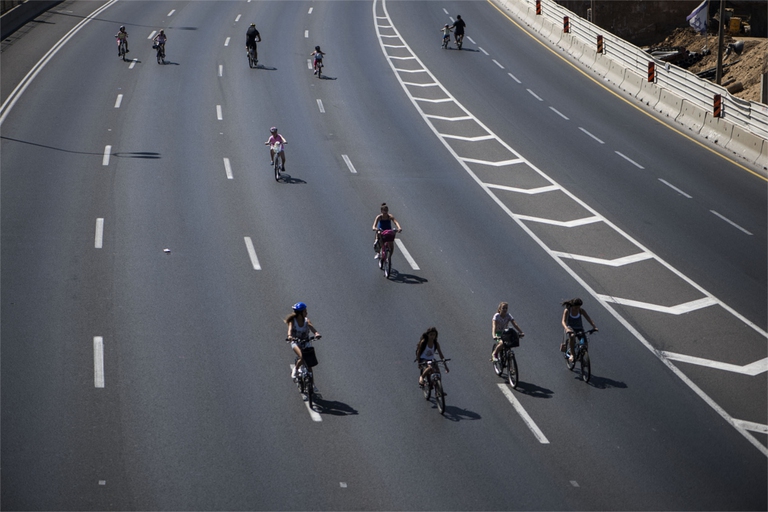 This successful project combines cyclists’ needs with those of people preferring to walk, run or use other means of transport such as roller blades. Being Quito located at 2,700 metres above the sea level, Ciclopaseo mainly consists of latches with some flat sections. Along the route, cyclists and pedestrians can take part to musical and stage performances (especially in the parks near the cycling route), as well as buying food from local street food sellers. In case of problems with bikes during ride, cyclists do not have to worry. There are repairmen and stands where it is possible to check tyres pressure and make some small repairs.

Starting from 2012, Ciclopaseo was integrated with bikesharing service BiciQ, allowing cyclists to ride for free for 45 minutes. Following the visit of the Pope in Quito, the fleet rose from 500 to 800 bikes.

The first Ciclopaseo took place in 2003 and consisted of a route of only 9.5 km, with 3,000 people taking part to it. At that time, the event was only held on the last Sunday of the month, but its popularity grew. Quito followed the example of other similar projects carried out in Colombia, in Bogota and Medellin.

The multi-coloured beauty of the world’s indigenous cultures, through Jimmy Nelson’s photographs

As indigenous traditions are being slowly left behind, photographer Jimmy Nelson features the world’s remotest and most beautiful indigenous tribes to teach us how special they are.

The global gender gap, the 2017 report shows that disparity has increased for the first time in a decade

The global gender gap or index has widened, the 2017 World Economic Forum report shows. In view of the International Day for the Elimination of Violence against Women, we analyse how these phenomena are sadly related.

Santiago Maldonado, the missing Argentine activist has been found dead

Argentinian activist Santiago Maldonado, who disappeared during a protest in favour of indigenous rights, has been found dead. With congressional elections ahead, the case has shaken the country to its core.

Pablo Ernesto Piovano’s photo feature on the effects of pesticides on people, The Human Cost of Agrotoxins, is now a book. It gives a voice to all the people affected by pesticides while praising their strength and vitality.

Illegal gold miners reportedly killed about a dozen members of an uncontacted indigenous tribe in the Brazilian Amazon. Some have accused the government of failing to protect such groups.