Francis and Fidel. A historic meeting to talk about the environment

Pope Francis and Fidel Castro together, to talk about climate and environment. An historic meeting, almost surreal, emerged from the first official visit of the Argentinean Pope in the Caribbean and communist country, from 19 to 22 September. An exchange of opinions (and presents) that lasted 30 minutes, at the residence of Castro in the capital Havana, in the only presence of his revolutionary son, Alex, who took the picture of the handshake that already became viral. 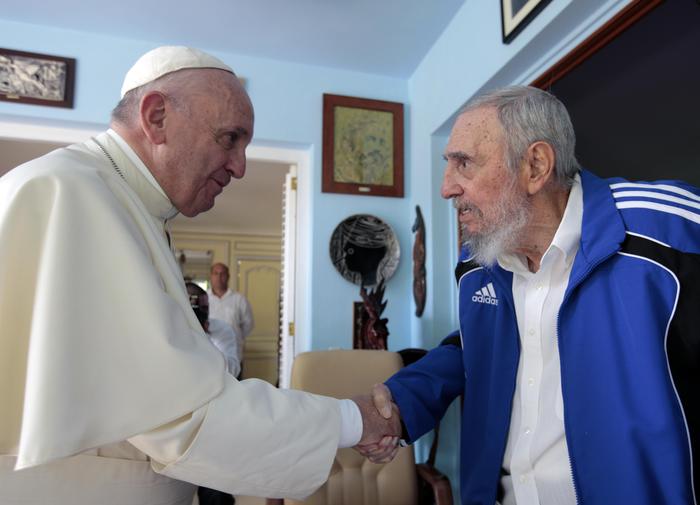 The environmental issue bonds the two leaders, and it is the key point of Francis’ papacy, in view of the climate change conference, to be held in Paris in December. It’s not difficult to imagine that among the gifts there’s a copy of the Laudato Si’ Encyclical. Pope Francis also congratulated on the re-establishment of diplomatic relations with the United States – where he will next go before being back to the Vatican – defining it “an example of reconciliation for the entire world”.

The Pope’s arrival was earlier welcomed by the President of Cuba and brother of Fidel, Raúl Castro. The visit followed with the celebration of a touching Mass in Revolution Plaza, Havana.

Ahead of Pope Francis’ visit, Cuba’s council of state decided to release 3,522 prisoners, a mix of women, inmates younger than 20 with no prior offenses, those older than 60, prisoners with illnesses, some foreigners whose countries have agreed to repatriate them and others whose terms are coming to an end.

Francis is the third Pope to visit Cuba, after his predecessors Benedict XVI and John Paul II.

Nobel Peace Prize winner Aung San Suu Kyi’s biography is tied with that of her parents and the history of Myanmar (formerly Burma). A story marked by nationalism, Western influence and compromises with the military.