In Europe there’s still a capital divided by a wall. An exclusive reportage from Nicosia, in Cyprus, which is split by a “green line”.

Tourists and locals rhythmically walk through the Ledras street gate. Police officers glance at passports, quickly handing them back to their owners. Fifteen metres later, the routine begins once more: passport, quick glance and goodbye. Nicosia would be a normal city like many others if not for the two checkpoints: the locals from the historic centre play live music, couples walk hand in hand, shops attract passing tourists. But Nicosia isn’t like all other cities, it’s the last divided capital.

One of the many pieces of the wall dividing the city can be found a few metres away from the Ledras street gate. The barrier is no higher than two metres, painted white and blue, guarded by a distracted soldier inside a booth. “What can you do about it? We just have to accept this situation,” says Costas, who manages a restaurant that borders a few centimetres with the green line, the buffer zone present in the city since 1974. “My wife was from the Turkish-Cypriot part of the city, she was forced to leave everything behind and move to this part of the city.” The Greek-Cypriot restaurant is called Checkpoint Charlie, like the famous passage in the Berlin wall. Costas cuts the conversation short and says “We’re used to it. Now tell me what you want to eat.”

Cyprus declares its independence in 1960. Greeks and Turkish Cypriots have shared the united island for 14 years. The agreement on the autonomy and the prohibition to annex the newly formed state reached between Greece and Turkey, with the United Kingdom as guarantor and signed in Zurich and London, is valid until 1974. In that year, the Greek-Cypriot nationalist movement Eoka B organises a coup with the support of the Athenian colonel junta. The president of the republic, Archbishop Makarios, manages to escape finding refuge in British military bases, whilst the Turkish army intervenes to protect the Turkish-Cypriot minority. Therefore, the island is divided in two, Southern Cyprus, which is recognised by the international community, and Northern Cyprus, isolated and supported only by the Turkish government. The so called “green line” is what currently divides the two entities, guarded by the United Nations Peacekeeping Force in Cyprus.

Recent history tells us about political negotiations and international summits. The gates that separate the island open for the first time in 2003. Citizens can enter the neighbouring country for the first time since the end of the war. The reunification roadmap proposed by then-general secretary of the United Nations Kofi Annan fails in 2004. Turkish-Cypriotes vote in favour of the reunification in a popular referendum, but the vast majority of Greek-Cypriots vote against it, halting the initiative. The negotiations for reunification seem to breathe new life in 2014. The two parts meet numerous times. There is hope for a reunification until 2017, when the Switzerland talks fail. Today the situation is unaltered: a wall still divides Nicosia, and a line divides the nation. 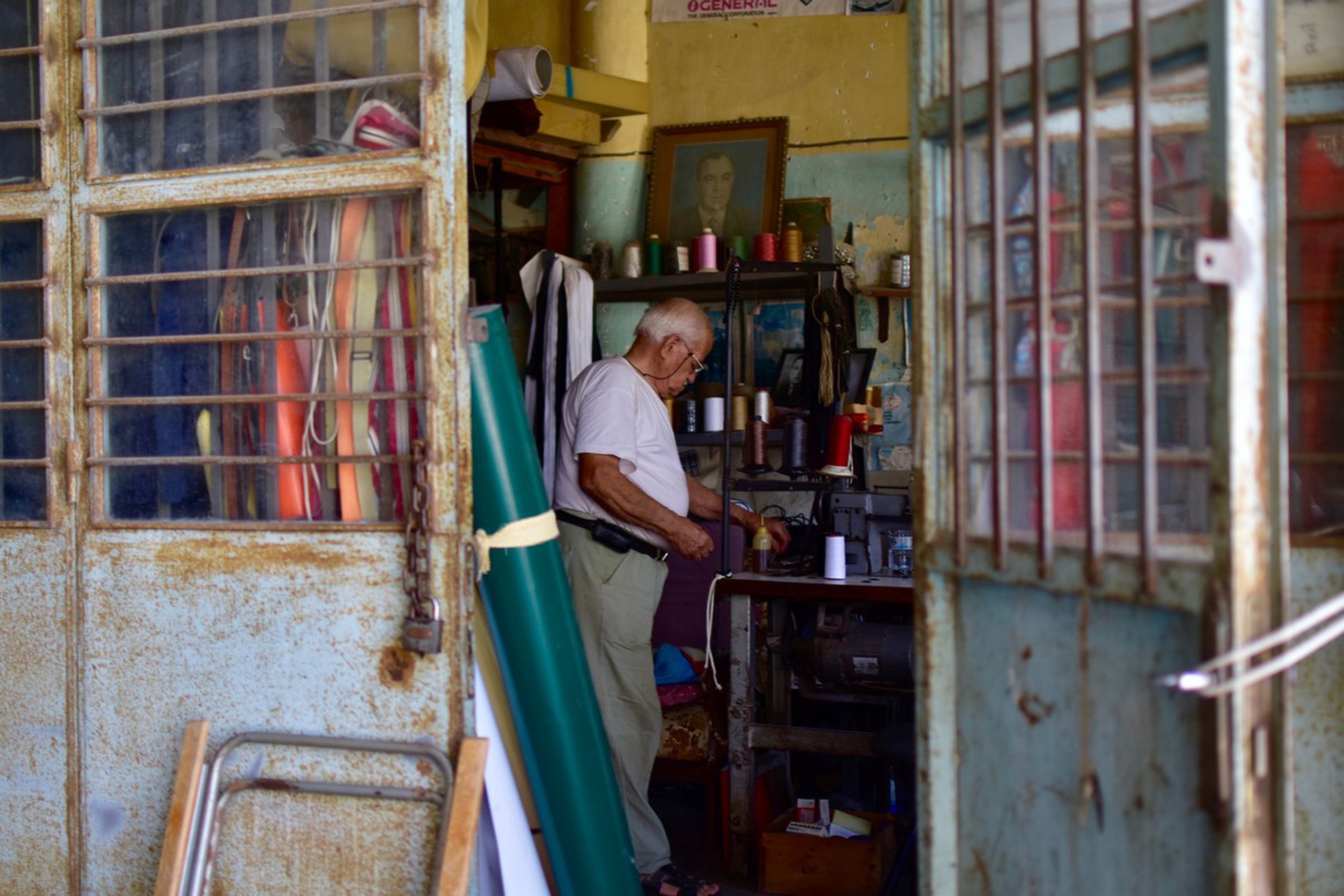 But some still persevere in their fight for reunification, under the shadow cast by the wall. Maria Hadjipavlou, an activist, secretary and one of the founders of the Cyprus Academic Dialogue (CAD), says: “The truth is society is not ready for reunification, the substrate on which to create a shared state identity does not exist yet. For example, school books still report a biased view of our history.” The CAD is an organisation run by scholars, from both sides, who decided to unite in order to create a shared consciousness of the island. “We often teach on the other side of the border, just like Turkish-Cypriot professors come on this side. We mostly do it in order to exorcise the fear of something different and give a face to our enemies,” she continues.

Maria was a refugee too, like 50 per cent of the Greek Cypriots who live in Nicosia, and she concludes by saying: “Our work does not end with raising awareness. With our presence and dialogue we keep pushing towards reunification, pressuring politicians to face it in a constructive manner”.

Union is part of the education of young Cypriotes

In the middle of the green line guarded by UN interposition forces, after the Paphos gate, there is the Home for Cooperation. The association is the incarnation of intermunicipal cooperation and contributes to the efforts of civil society towards peace and the creation of intercultural dialogue. Loizos Loukaidis, who manages the educational projects of the association states that “The objective of our programs is to build a solid reunification in the future, we work with both Turkish Cypriot and Greek Cypriot children.” The Home for Cooperation headquarters is symbolic: “We chose this place because it’s in the middle, and everyone can reach it without having to cross both borders”. The organisation also hosts numerous artistic and cultural programmes aimed at promoting trust between the two parts. “We don’t speak directly abut the Cypriot issue, we prefer to face general themes that vary from gender discrimination to pollution with those who come to our home, in this way the opposing parts come together, using shared issues to find some common ground on which to work,” Loukadis concludes.

But as Hadjipavlou reminds us, distrust, rage and stereotypes continue to dominate the political debate, and much more, on both sides. “It was relatively easy for me, my family lived in the Turkish part, we always had good memories of our neighbours, regardless of what happened,” these are the words of Andromachi Sophocleous, 30-year-old Unite Cyprus Now activist, one of the most sensitive associations on the reunification issue.

“The situation is complicated and slow, for years we have fought and invested energy towards a reunification, when the 2017 Switzerland talks failed our morale suffered a lot, but we kept going, we had to keep going,” continues the activist. Unite Cyprus Now selected the social network route. The organisation continues to work and pressure politicians from both sides to continue with the dialogue through Facebook and Twitter. “Now it is important to continue pressing for the creation of a common society,” says Andromachi. “I think that politicians wish to crystallise the situation”.

The real challenge is to bring down mental walls

“I don’t accept and I will never accept anyone who tells me this island doesn’t belong to me. Divisions only exist when you accept them,” concludes Andromachi. The shadow of the Nicosia wall is still disturbing. Even though it isn’t that large, the barrier blocks every road headed north, mentally dividing the city. If the cities of Paphos, Larnaca, Aya Napa and Limassol don’t feel like the’re within the last European country with a divided capital, this is obvious in Nicosia, so much so that it became a routine for its inhabitants. Andromachi, Maria, Loizos and all the people from this island have understood this, and are fighting to bring down the mental wall.