The Isle de Jean Charles, southern Louisiana, United States, is home to a small native community of the Biloxi-Chitimacha-Choctaw tribe. These people are forced to leave their land and homes, becoming the United States’ first climate refugees.

An island swallowed by the sea

Rising sea levels caused by global warming and erosion have submerged about 98 per cent of the island over the past 60 years. In the 1950s, the isle was 18 kilometres long and 8 kilometres wide, but today it’s only 3 kilometres long and half a kilometre wide. So, the community – which counts 400 people – has been forced to leave. The U.S. Department of Housing and Urban Development (HUD) allocated 48 million dollars to evacuate locals and move them to an island located further north. The operation, euphemistically named “resettling”, will last two years. 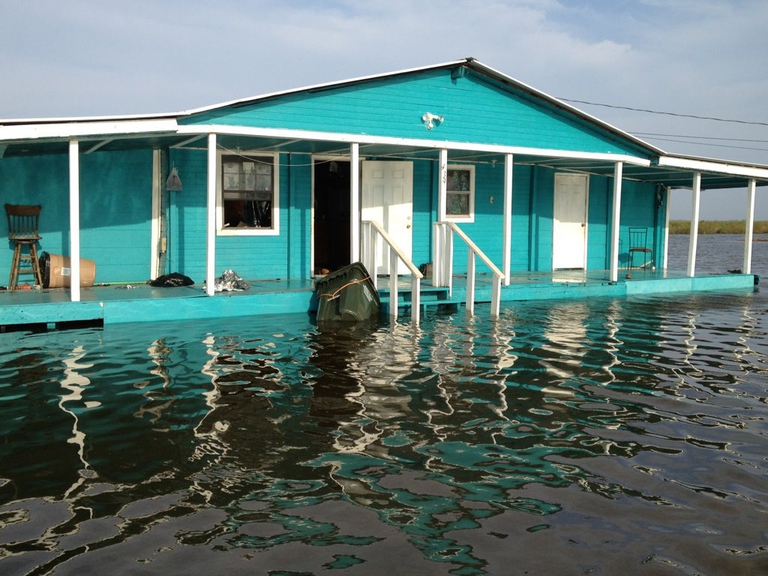 The situation has been further exacerbated by the oil industry, which is particularly active in Louisiana. Continuous extraction activities have led to subsidence, an irreversible phenomenon that causes the surface to shift downward. Louisiana’s lagoons have been altered by the construction of hundreds of canals and pipelines, becoming more vulnerable to climate change and extreme weather events.

According to the National Oceanic and Atmospheric Administration (NOAA), sea levels are rising by 1 centimetre per year. Jean Charles is expected to be wiped out by only 50 years. This will lead not only to the disappearance of the Biloxi-Chitimacha-Choctaw’s homes, but also of marine birds’ important nesting sites.

Some people struggle not to leave the island

Leaving behind one’s home and land is anything but easy. In fact, 70 people haven’t left the island yet. “I’ve lived my whole life here, and I’m going to die here,” said Hilton Chaisson, an inhabitant of the island. What is going on in Louisiana is just the tip of the iceberg and this small island inhabited by Native Americans could be an anticipation of what could happen next.