Bangladesh adopts the death penalty as punishment for rape following widespread protests, but other solutions to systemic sexual violence are needed.

Bangladesh has recently instituted the death penalty as punishment for rape, following waves of protests against shocking levels of sexual violence in the country. Here, a woman is raped every six hours.

If you go to sleep at midnight and get up at six o’clock in the morning, in the meantime somewhere in Bangladesh a sister has been raped. When you go out with your family or your little girl, somewhere in the country someone else’s daughter is being violated. You go shopping with your wife, while someone else’s wife is struggling against an attacker. No woman can be said to be truly safe in Bangladesh.

Recently, a housewife was stripped naked and tortured in Begumganj, Noakhali district. In Sylhet MC College, a housewife was raped while her husband was tied up and a teenage girl was sexually assaulted by a Christian father in Rajshahi district.

In response to these atrocities, thousands of students and ordinary people have been protesting in different parts of the country, including the capital Dhaka. Some have been demanding the death penalty for rape as well as other reforms in a country that they feel has lost its sense of morality due to a lack of proper justice and enforcement.

In response to such an outcry, on the 12th of October Cabinet Secretary Khandker Anwarul Islam announced the introduction of the new law, the Women and Children Repression Prevention (Amendment) Bill 2020, which punishes rape with the death penalty or a life sentence. 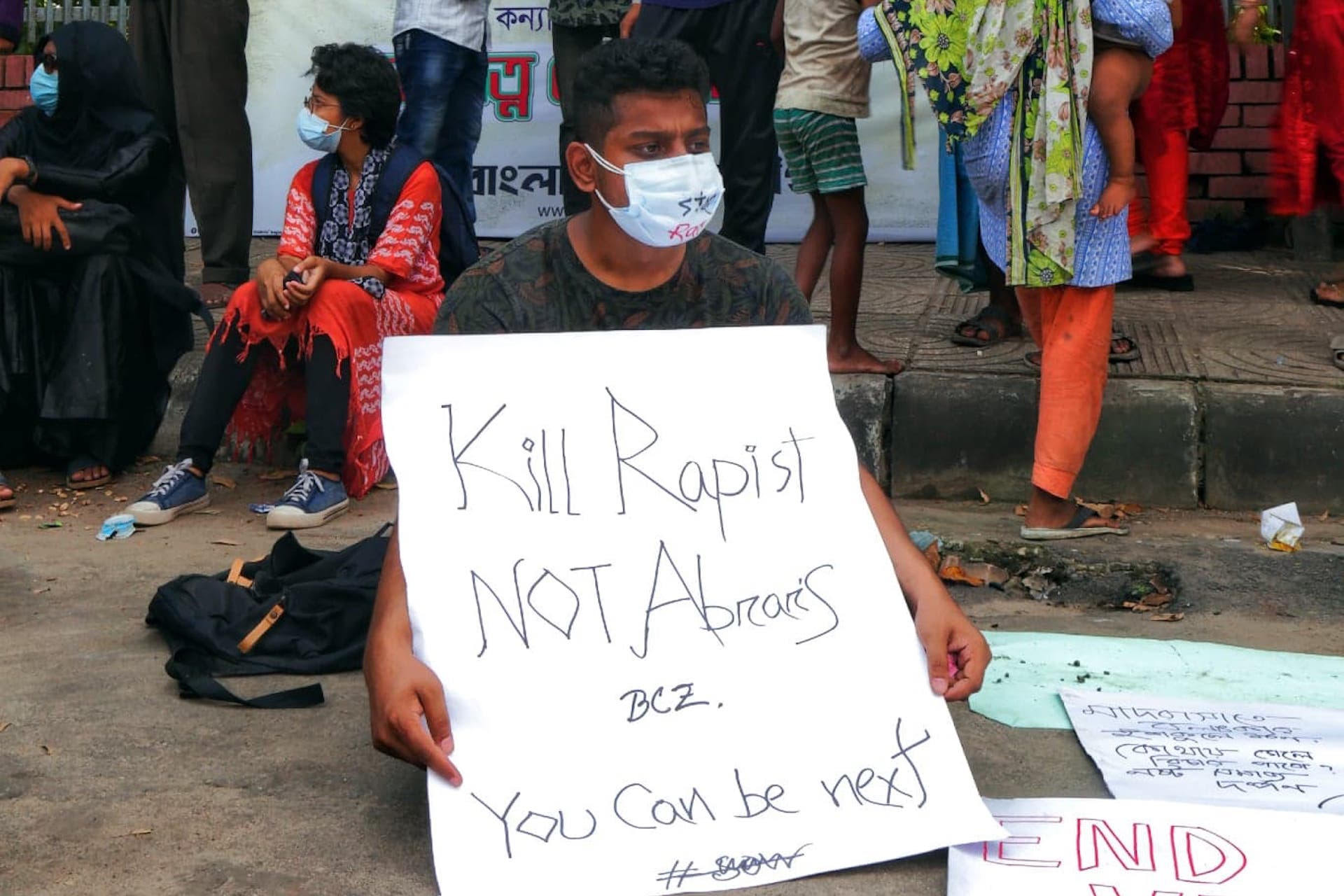 Rape in Bangladesh, an incomplete picture

Just two days prior to the announcement, news media reported that a husband urged a friend to rape his wife because she wouldn’t agree to prostitution. A housewife was raped after getting off from a cycle rickshaw. Another woman was gang-raped at home. A father raped his daughter. A 56-year-old landlord raped his tenant’s nine-year-old twin daughters after having offered them Coca-Cola. An uncle raped his niece in the Khulna, Chandpur district. Another uncle raped a baby niece in Tangail, Feni district.

From Bangladeshi brothels, the voices of the prostitutes trapped in the prison of sexual slavery

As many as 975 women were sexually assaulted – including 208 gang rapes – between January and September this year, according to Ain-O-Salish Kendra, a Bangladeshi human rights organisation, which compiled this information based on newspaper reports.

Incidents of sexual violence have almost doubled in the last ten years according to data collected by the Bangladesh Mahila Parishad (Women’s Council). While cases of physical violence against women have decreased by 40 per cent in the past decade, the number of sexual assaults has doubled from 940 rapes in 2010 to 1,855 in 2019. In reality, the situation is very different as such statistics capture only a fraction of the number of women violated. One reason for this is that victims face severe social stigma. Because of a weak criminal justice system, corruption and disruption of the judicial process it is hard to see the true picture.

In the majority of cases, victims are treated as the guilty party by the police and as a result, they and their families are deterred from seeking justice, instead doing their best to conceal that such crimes ever happened. Incidents often come to light only when the victim dies, or their condition is critical. In this way, even the appalling published figures fail to reveal the true extent of the problem.

Even such incomplete statistics show that sexual violence against women in Bangladesh is widespread. Political influence, administrative failure, lack of social resistance and failure to implement existing laws are the main reasons why so many perpetrators go free.

Even child rape has become a regular occurrence, ceasing to shock people as it did some years ago: among the victims in 2019, 133 girls were between one and six years old. Again, the real statistics are hard to come by in a conservative and secretive society like Bangladesh’s, in which men’s violent behaviour is too often condoned with the phrase “boys will be boys”.

Last year, news that seven-year-old Samia Afrin Saima was sexually assaulted and brutally murdered in the capital’s Wari area shocked people. Her body was found in a building under construction, where she would go to play with her friends. In this case, Harun-or-Rashid was convicted of her rape and murder, and sentenced to the death penalty.

Around the world, new research is being conducted and strategies are being devised to combat rape and prevent child rape. But Bangladesh is hampered by obsolete laws and outdated ideas. There has been no significant revision of policies for many years, as there have been in neighboring India for example (though the situation there also remains complex).

Such crimes have shaken the conscience of people of all walks of life who know that no one, rich or poor, is safe. While people, including protesters, are demanding that perpetrators should be subject to exemplary punishment, protests and punishment won’t stop rape on their own. Feminists are demanding a change in the attitude and mentality of men towards women.

There is no conclusive evidence that (the death penalty) curbs any crime, including rape, and it could end up deterring reporting or even encouraging rapists to murder their victims to reduce the likelihood of arrest.

It is urgent to set up a system of social education in every neighbourhood: cultural and sporting activities through the Committee for the Elimination of Drugs and Violence against Women should engage boys and adolescents and make them aware that such actions are contrary to humanity. Such organisations should recruit the same boys who harass women and tease or insult them on the streets, encouraging them to become more sensitive and respectful; and each boy who learns this lesson could influence ten more. The time has come for action more serious than anything we have yet seen.