A protest against extrajudicial killings in Bangladesh © Habibul Haque/Drik

“Abbu, tumi kanna kortase ke?” (papa, why are you crying?). This is what Ekramul Haque‘s daughter wanted to know over the phone after an alleged gunfight between her father and the Rapid Action Battalion (RAB), the Bangladeshi police force’s elite anti-crime and anti-terrorism unit, on the 27th of May 2018. Haque lost his life in the fatal encounter whose underlying motive, family members believe, was political rivalry.

This is how extrajudicial killings hurt the people of Bangladesh. According to human rights organisation Odhikar, from January 2009 to December 2019, under the country’s present government led by Prime Minister Sheikh Hasina Wazed, 2,470 people have been killed in by the police, RAB and the Detective Branch (a specialised law enforcement unit).

As of the 25th of June, 158 people had fallen victim to extrajudicial killings in 2020. It is also known that 695 people have died in prison custody in the country over the course of the last ten years and more than 601 people have gone missing. In addition, 7,806 women have been raped, 1,934 children tortured and eighteen children killed at the hands of law enforcement. 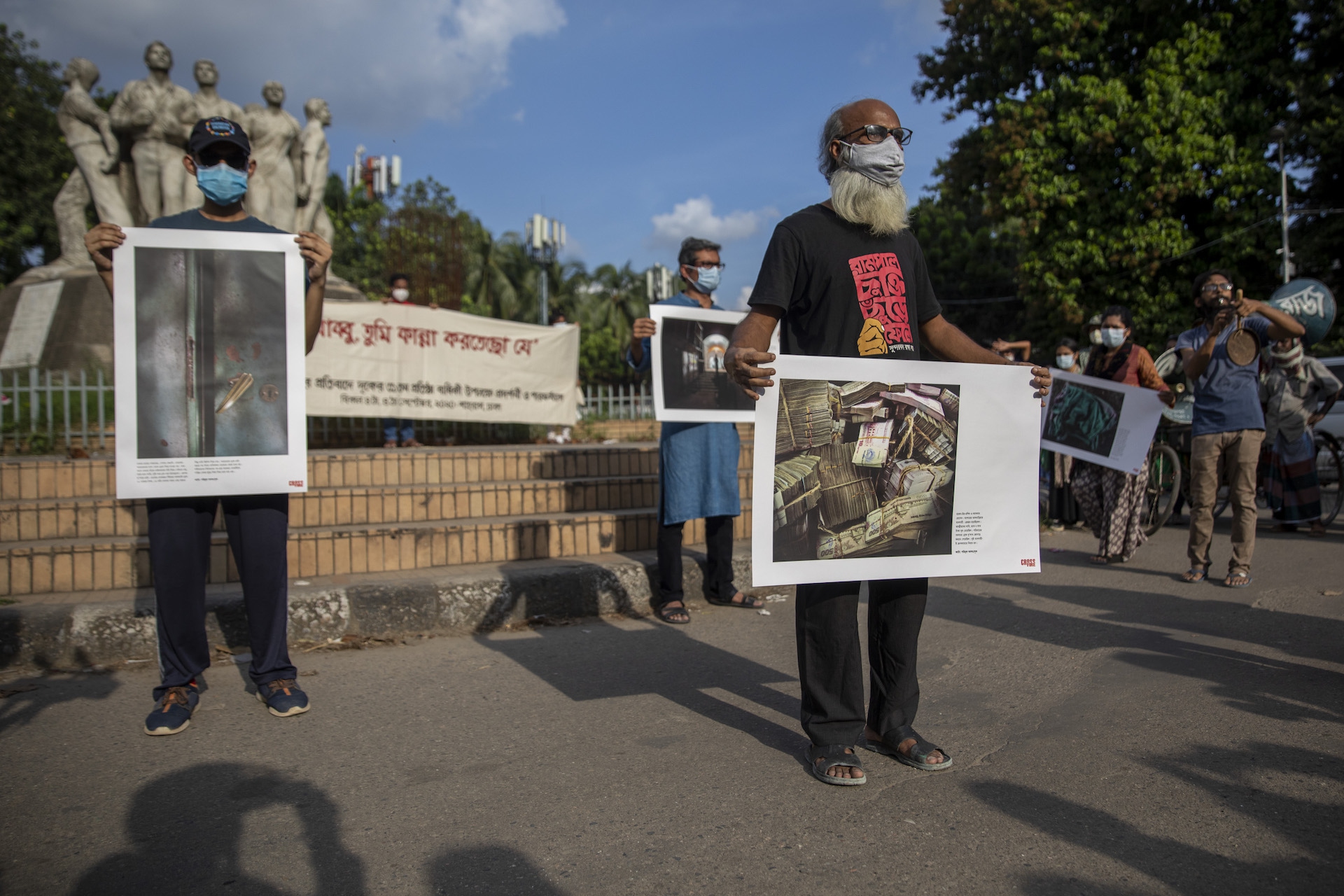 Recently, relatives of retired army major Sinha Md Rashed Khan filed a case alleging that he was killed by police. He was shot dead on the night of the 31st of July at the Shamlapur police check-point in the city of Cox’s Bazar. His family found the courage to seek justice, as the entire nation, including retired army officers, has protested against the killing of an ex-serviceman. In many other cases, however, ordinary families refrain from appealing to the courts as crimes committed by police are almost never prosecuted. On the 4th of September, the Drik Picture Library based in the Bangladeshi capital of Dhaka, together with its founder, activist and photojournalist Shahidul Alam held functions protesting crossfire, the term used by RAB to describe the deadly encounters. Drik celebrated the 31st anniversary since its founding by holding a photo exhibition entitled “Crossfire”, the same one that was shown in 2010 with the addition of photos of Haque and Sinha, both victims of police violence, to denounce extrajudicial killings across the country.

However, the premises of Drik’s exhibition were attacked; photos were damaged and protesters were targeted by members of the ruling Bangladesh Awami League party as, it is reported, police stood by. “This is not the first time: I held an exhibition on crossfire in 2010, there were also interruptions then,” says Alam, who was imprisoned in 2018 on charges of spreading “propaganda and false information” and chosen, together with other persecuted journalists, as Time Person of the Year 2018.

More than 100 activists of the ruling party led by Hasibur Rahman Manik (a local councillor, ed.) stormed into the programme … The ruling party men then started pushing around the activists, snatched photos of the exhibition, tried to seize their mobile phones and stood in front of the Drik’s banner wielding their own placards.

#ShahidulAlam is a renowned photojournalist and commenter in #Bangladesh, and the founder of the multimedia training organization the Pathshala Media Institute & the Drik photo library.

“It is truly reprehensible and surprising that protests by cultural organisations are being thwarted in such a way in a democratic country,” in the words of Alam. He urged people to continue the struggle and remain vocal to save Bangladesh from such anarchies.