The world’s first power plant to produce energy from waves

The world’s first wave-energy plant connected to the electricity grid has been switched on in Western Australia. Here’s how it works and produces renewable energy.

On 18 February 2015, the Perth Wave Energy Project, the world’s first plant that produces electricity from waves, became operational. The electricity provided by the project will be used by the HMAS Stirling naval base and will be entirely purchased by the Department of Defence. 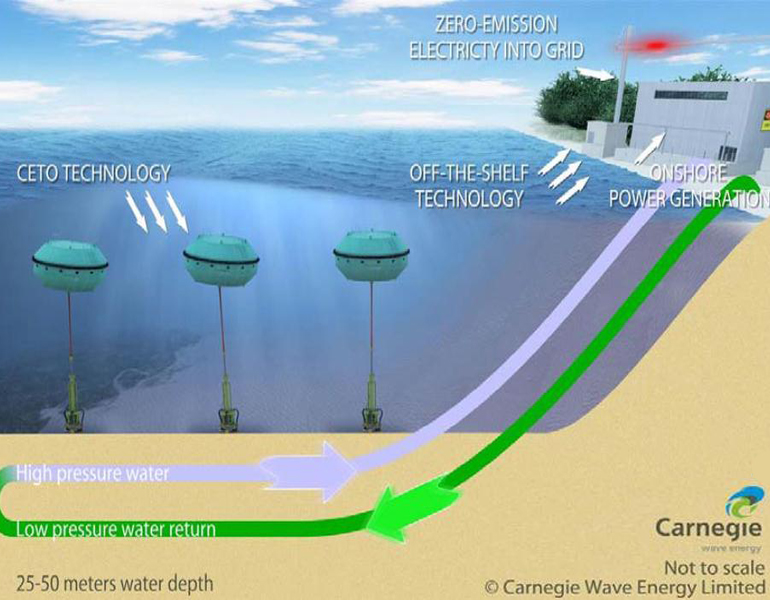 It has been realised and produced by Carnegie, owner and developer of the CETO technology able to produce energy from waves. It required an expense of some 70 million euros over 10 years, and has been financed by the Australian Renewable Energy Agency (ARENA), the Australian government and privates.

The CETO is the world’s first system to be entirely under water and invisible from the shore. The buoys, completely submerged, use ocean waves’ movements to drive pumps attached to ocean floor. The pumps deliver high-pressure water to drive hydroelectric turbines onshore, which will in turn produce renewable, zero-emissions electricity. The high-pressure water will also be used to power a reverse osmosis desalination plant onshore.

“This is the first array of wave power generators to be connected to an electricity grid in Australia and worldwide,” said Ivor Frischknecht, ARENA CEO. “During the testing phase, the first 240kW peak capacity CETO 5 wave unit operated successfully for more than 2,000 hours.” The world’s first grid-connected power plant is pumping out enough energy for as many as 2,000 houses, according to Michael Ottaviano, Carnegie CEO.

The company is working to improve the system in order to have a more efficient technology, with lower maintenance costs, and with a production of 1 megawatt of power. This will be the next goal.

Costa Rica and Australia, the goodies and baddies of climate change

Coal’s inexorable decline: a mine worth millions is sold for a dollar

Coal prices are plummeting and cases of extractive companies filing for bankruptcy are on the rise. The case of an Australian mine.