Uganda’s Museveni holds on to presidency in contested elections

Uganda’s incumbent leader Yoweri Kaguta Museveni was declared winner of the presidential elections by the country’s electoral commission on the 16th of January, to the disappointment of the opposition mostly composed of young voters. The elections held on the 14th of January after two months of campaigning were the sixth the 76-year-old has won since 1986, when he captured power after a guerrilla war that lasted five years.

Main opposition candidate Bobi Wine – who has contested the results and has been called to provide evidence of the fraud he alleges – was put under house arrest until, on the 25th of January, a court ruled this action unlawful.

The results of Uganda’s elections

According to the results released by the electoral commission, Museveni won with 5,851,037 votes, representing 58.64 per cent of the total. Robert Kyagulanyi, popularly known as Bobi Wine, a pop star and new face in politics, turned out to be the incumbent’s major challenger. He received 3,475,298 votes, equal to 34.83 per cent. The ruling National Resistance Movement (NRM) party therefore retains a parliamentary majority with over 300 MPs elected, versus 60 from Wine’s National Unity Platform (NUP) party.

There were 11 contestants in the presidential race, of which only one candidate was female. With his four-months-old party, Wine attracted the support of many, mostly youths and people from central Uganda, where he comes from. Here, Wine emerged victorious with over 60 per cent of the vote versus Museveni’s 37 per cent. The incumbent blamed the Catholic Church for the disappointing result. “Some religious leaders have been telling people not to vote for me,” he claimed.

His local chief campaign manager Geoffrey Kiwanda levelled similar criticisms. “Father Anthony Musala was on a pulpit and told those in church that those who vote for Museveni are sinners. Many other Catholic priests and bishops openly campaigned against Museveni. If those Catholic leaders want to join politics, they should remove clergy clothes and openly join politics”.

“I and my family congratulate Ugandans for voting me back into office,” Museveni declared. “This has been the most transparent and free election since 1960, when Uganda got its independence” (from the UK).

Election observers from the East African Community and African Union agree that the process didn’t present irregularities. “These elections overall were free, fair and transparent,” according to Samuel Azu’lu, leader of the African Union’s expert mission. “There were isolated cases of technological failures by biometric voter verification machines, but this was corrected using manual methods,” added the head of the East African Community observer mission Domitien Ndayizeye.

However, many Ugandans and other observers say otherwise. A day before the elections, the internet was shut down by the government, including social media platforms such as Facebook, Twitter and WhatsApp. Service was reinstated on 18 January. The two main opposition candidates – Wine and Forum for Democratic Republic of Change (FDC) candidate Patrick Oboi Amuriat – also claim that they suffered the wrath of Museveni’s security forces, driven by the justification that the candidates were breaking Covid-19 restrictions during their campaigns.

“The results announced aren’t the ones which we have in our records,” Wine stated. “They’re fake. There was a lot of fraud during the elections”. Ever since Museveni was announced winner, police and soldiers surrounded Wine’s home. Police spokesperson Fred Enanga justified the decision by saying that “we got information that he was organising riots against the results. We have the duty of protecting all Ugandans”. Wine’s lawyers went to court to contest his house arrest and the High Court ruled that the government’s actions were against the law, and for police and the army to vacate the area surrounding the opposition leader’s home – an order which they complied with the following day.

This wasn’t Wine’s first encounter with Uganda’s security forces. During the electoral campaign, the opposition candidate was arrested for flouting Covid-19 guidelines at a rally in the eastern district of Luuka. 58 people were killed during riots on 18 and 19 November 2020 sparked by his supporters’ anger and met with an iron fist by the security forces.

“I was harassed, beaten and arrested by police many times. I was never given the liberty to campaign freely. The elections weren’t free and fair,” according to Amuriat, who came in third with less than 500,000 votes.

One of Wine’s supporters, 25-year-old Simon Mbalaga believes that “they cheated us. Bobi Wine won the elections because he was very popular. We can’t accept such cooked-up results. We’re ready to die for our man. We’re waiting for him to instruct us on what to do”.

On the other hand, 70-year-old Winnie Namuddu, a Museveni supporter, says: “Museveni can’t easily be defeated by a young man who is just learning politics. They’re now shouting that he cheated, yet he won honestly. We love Museveni because he assures us security”.

We applaud Ugandans who exercised their right to vote in the January 14 elections, yet remain concerned by reports of election irregularities and politically motivated arrests. We urge authorities to address such irregularities and restore communications. https://t.co/HI0qd8A9q3

No US election observers in Uganda

Certain organisations that were supposed to oversee the elections weren’t accredited, which left many wondering if the vote was in fact rigged. Among these were observers from the United States: of the 75 people presented by the country’s embassy in Uganda, only 15 were accredited, which led the US to back out of the role.

“With only 15 accreditations approved, it isn’t possible for us to meaningfully observe the conduct of Uganda’s polling centres across the country,” commented US ambassador Natalie Brown. To which electoral commission spokesperson Paul Bukenya replied that 15 people were in fact accredited. “There is no obligation that all the people they presented had to be accredited,” he added. 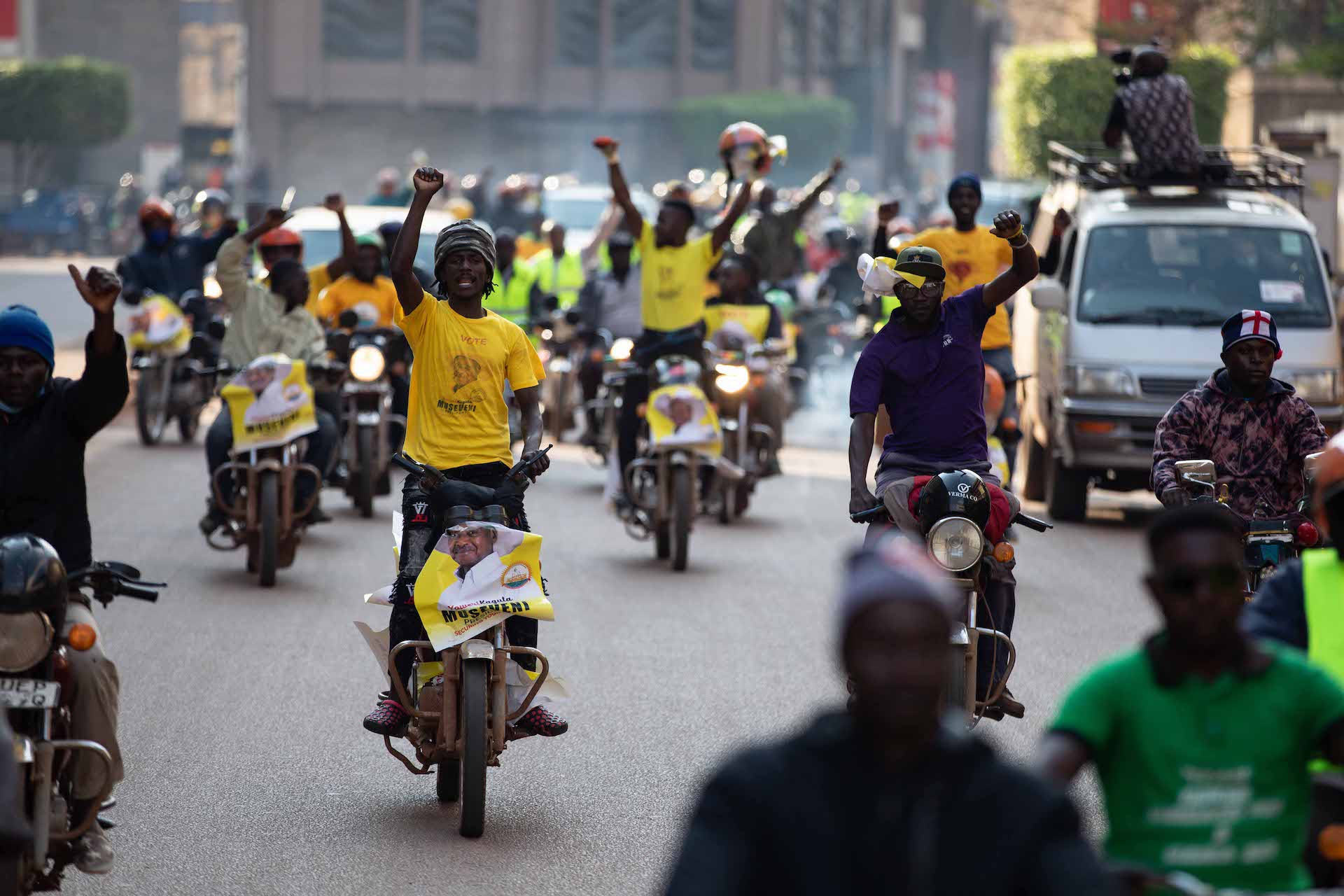 Two people were shot dead as security forces quelled protests against the outcome of the elections in the eastern city of Masaka on Saturday 16 January, according to the Uganda People’s Defence Force (UPDF). Spokesperson Brigadier General Flavia Byekwaso said in an interview that twenty more were injured and taken to hospital. “They attempted to cause chaos claiming that Bobi Wine had been cheated during the elections. So far, 17 people have been discharged from Masaka hospital while three are still receiving treatment”. Enanga said in a press conference in the capital Kampala that during the campaign 223 people were arrested for various violations related to election violence.

In Uganda’s central region, the atmosphere is again tense due to the heavy deployment of the police and army. Officers and soldiers are patrolling the streets day and night, ready to quell any nascent protests.

Read more on these topics: Africa

Only two northern white rhinos remain, and both are females, but scientists have created two new embryos to save the species, for a total of five.

Hostilities between Morocco and the Sahrawi people over control of Western Sahara defy a 1991 peace treaty that hasn’t been brought to fruition.

A look at the events behind the recent violence in Uganda, where riots broke out following opposition candidate Bobi Wine’s arrest, leaving 45 people dead.

An oil pipeline planned in East Africa could cause irreversible damage

Peace in Sudan. A historic agreement puts an end to 17 years of civil war

The Sudanese government and rebel groups have signed a historic peace agreement, the start of a new chapter for the country after 17 years of civil war.