A look at the events behind the recent violence in Uganda, where riots broke out following opposition candidate Bobi Wine’s arrest, leaving 45 people dead.

For over a decade Uganda has been one of the most secure countries in Africa, but since the presidential campaign kicked off on the 9th of November this year in view of elections on the 14th of January 2021, the county has turned into a tinderbox. Confrontations between members supporting different presidential candidates have become commonplace, often turning violent.

Fighting breaks out in Uganda

On the 18th of November, riots kicked off in different parts of the country when Robert Kyagulanyi, known by his stage name Bobi Wine, was arrested in the eastern district of Luuka. After remaining in police custody for five days, he was granted bail after being charged with breaking Covid-19 prevention guidelines and requested to return to court on the 18th of December. The 38-year-old musician leads the National Unity Platform party and is one of the most popular opposition candidates standing against President Yoweri Museveni, who has been in power for 34 years. Wine was arrested for ignoring coronavirus containment measures by holding rallies with up to thousands of people, especially young supporters, defying the limit of gatherings of 200 people. Severe unrest took place in Kampala, the capital, and other major centres immediately after he was arrested – escalating further after fake news circulated online that he had been killed. Throughout the electoral campaign fights had already broken out at rallies, to which the police responded using tear gas, but the worst came on the 18th of November when security forces used live bullets to disperse rioters, some of whom had started looting shops in Kampala.

45 people were killed in the city and other parts of the country according to police spokesperson Fed Enanga. Relying on sources within the security apparatus, local media reported that most were shot by plain-clothes agents. In addition, 836 people were arrested and 362 were charged.

JUST IN: Police and military surround Double Dream Hotel, Hoima city where @NUP_Ug Presidential Candidate Robert Kyagulanyi Ssentamu alias @HEBobiwine is spending the night. The motive for this operation is not yet clear #NTVNews

Wine, who is seen as a serious challenger to Museveni, has been arrested several times in recent years. Notably, in 2018 he broke his leg during a scuffle that broke out when he was detained in the northern town of Arua (he was later flown to the US for treatment). At the time, riots set off by the incident left at least three people dead.

In the most recent bout of violence instigated by his detention, rioters burnt tyres, blocking roads, and hurled stones at vehicles. Others used bows, arrows and machetes to attack police, as some looted shops and stalls. “I was in my shop when a group of ten young men came in and looted all my goods and the money in the safe,” Faridah Nakazi, a shopkeeper in Kampala, says. “They beat me before fleeing”. Taxi driver Silvester Owor laments how “thugs placed objects in the road forcing passengers to get out of the taxi. They beat them before taking everything they had”. President Museveni has warned that all those involved will be arrested and prosecuted. He alleged that some groups of protesters were being controlled by outsiders working to destabilise Uganda: “They’re being used by gays in western countries to disturb peace in our country”. During an address to the nation on 29 November, he also stated that those who attacked police deserved to be shot dead. “It is criminal to attack security forces by throwing stones or attempting to disarm them. In that scenario, the police will legitimately fire directly at the attackers if they fail to respond to firing in the air. The perpetrators have tested the consequences of playing with fire. It is wrong for some groups to only condemn the security forces, but never condemn law-breakers that attack innocent people”.

“The violent demonstrations were being coordinated by a group of three hundred ring leaders who were actively coordinating the distribution of tyres to flash points,” according to a joint task force including the military, police and intelligence forces. In the statement, Bobi Wine is also blamed for his continued disregard of the Electoral Commission’s guidelines.

“The Joint Task Force respects freedom of assembly and people’s democratic rights but will not allow for violent demonstrators and criminal opportunists to disrupt the peaceful environment we have had over the years. We have stepped up presence of our security personnel and minimised the use of tear gas which is indiscriminate in nature and resorted to the use of batons which are more specific,” the statement continues.

Out of the spotlight, journalists are being attacked

Uganda’s Catholic Archbishop Cyprian Kizito Lwanga requested that security organisations stop killing unarmed civilians. United Nations Secretary General Antonio Guterres also intervened to condemn the violence, issuing a statement through a spokesperson in which he “urges all political leaders and their supporters to participate in the electoral process peacefully, in accordance with the relevant regulations, and to refrain from any incitement of violence or hate speech”. He also called for perpetrators of human rights violations to be held accountable, as well as the immediate release of anyone who may have been arbitrarily arrested.

Although Wine’s detention has garnered the most attention, journalists covering the presidential campaigns have also faced the security forces’ clampdown with over 15 arrested and at least five admitted to hospital due to serious injuries. Robert Ssempala, Executive Director of the Human Rights Network for Journalists-Uganda, condemned such attacks at the hands of both police and rioters. 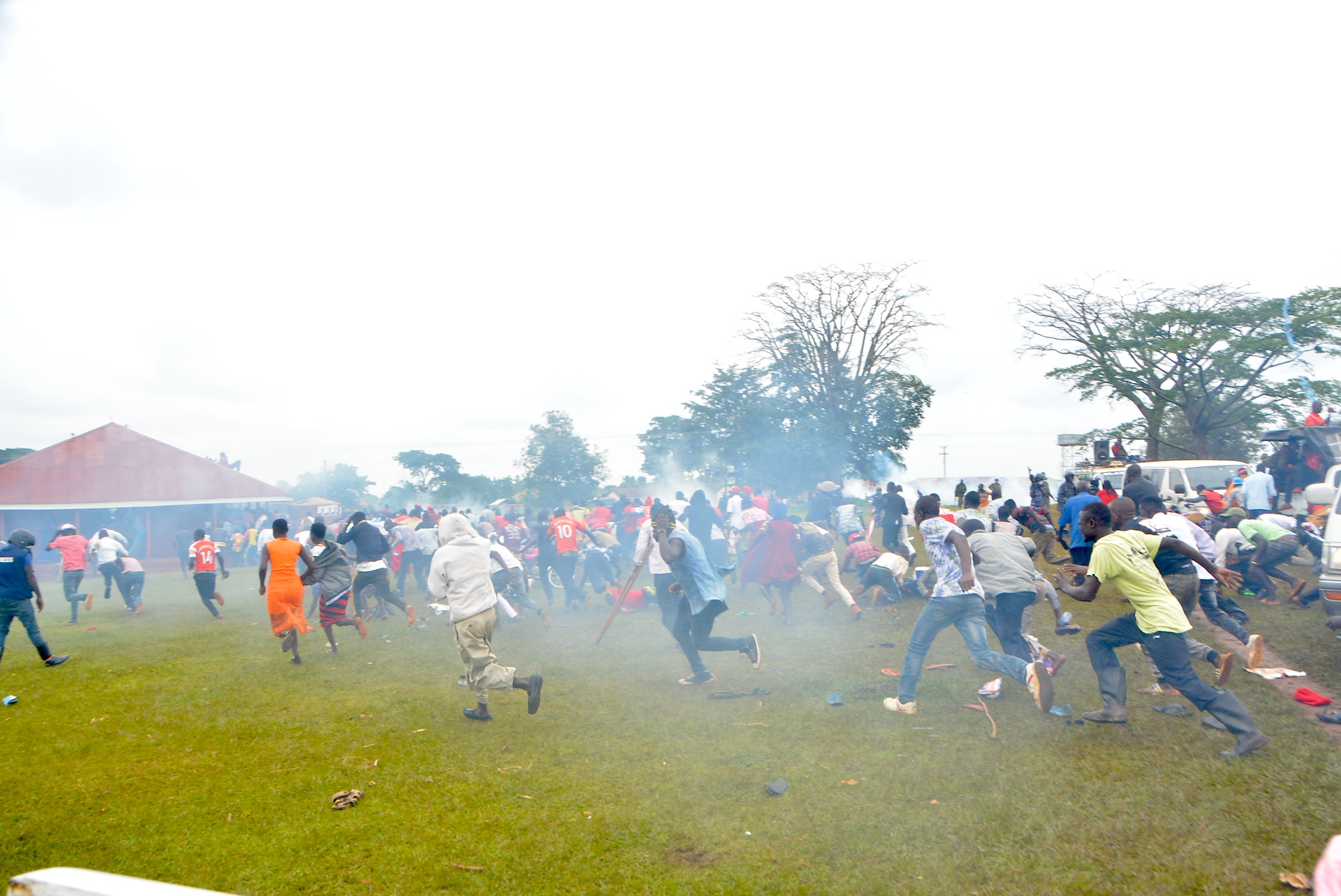 Media professionals targeted by beatings include Saif-llah Ashraf Kasirye, who works for Radio One and as a Ghetto TV cameraman, Sam Balikowa of City FM and Nile TV, Daily Monitor news editor Yasiin Mugerwa, Daily Monitor journalist Arthur Wadero, Patrick Matsiko wa Mucoori, Daniel Lutaaya and cameraman Thomas Kitimbo of NBS television. In addition, Moses Bayo is a freelance journalist and documentary filmmaker who was injured by a rubber bullet fired by police while recording Wine’s campaign, and on the 3rd of November journalists from different media organisations were pepper-sprayed while covering the candidate’s nomination.

“Security agencies should stop harassing journalists while they’re doing their work,” Ssempala urges. “In most cases they unleashed violence on journalists, especially those covering opposition presidential candidates,” such as Wine as well as Patrick Oboi Amuriat of the Forum for Democratic Change party. The African Centre for Media Excellence (ACME) also condemned the violence. “These actions aren’t only threatening journalists but also the free flow of information”.

11 candidates are facing each other for the highest office in the country in the presidential elections scheduled next January. Among them are a woman, two retired army generals and a 24-year-old youth, as well as two candidates who don’t even have campaign vehicles and often ask money from their supporters for transport. Whether Wine’s release has stabilised the situation and repression of political opposition is toned down sufficiently to hold a free and fair contest is yet to be seen.

Questions also remain as to whether Uganda – whose tourism industry has boomed in recent years, with up to two million visitors annually – will return to being “the safest place to enjoy real life,” as it was described by an international tour operator just two years ago.

Some fossil fuel advertising is now banned in France

France has banned some fossil fuel ads, but the ban’s limitations – including allowances for natural gas and financial advertising – have led to criticism.

The #PaidToPollute claimants are taking the UK government to court to answer for giving billions to the oil and gas industry.

Joe Biden has chosen Tom Vilsack as the US’ agriculture secretary. Many fear he’ll favour large corporations instead of looking out for small farmers.

A series of executive orders signed by President Biden on inauguration day mark a radical departure from the United States’ trajectory under Trump.

Uganda’s Museveni holds on to presidency in contested elections

Hostilities between Morocco and the Sahrawi people over control of Western Sahara defy a 1991 peace treaty that hasn’t been brought to fruition.

In the 1930s, at a time when minority political representation in the US was extremely rare, proud Native American Charles Curtis became vice president.

Aung San Suu Kyi’s party has won elections in Myanmar marred by the persecution of opposition figures and exclusion of Rohingya Muslims from the vote.

Joe Biden is the president-elect of the United States

Joe Biden obtained more votes than any other candidate in US election history and is en route to becoming the 46th president of the United States.