Sonita Alizadeh: the Afghan rapper who escaped arranged marriage thanks to a rhyme

Sonita Alizadeh succeeded in escaping an arranged marriage and now she sings to raise awareness on Afghan women’s dramatic conditions.

Sonita Alizadeh is an Afghan girl aged eighteen. Now, she lives in the United States and she attends the Wasatch Arts Center, dreaming to become a lawyer. But, throughout her life, Sonita has moved a lot.

Her family fled Afghanistan when she was 8 years old because of war and it moved to Tehran, the capital of Iran. Since Sonita was an Afghan undocumented refugee, she had no rights to education. For this reason, she started attending a non-profit association where she studied music.

Thanks to this association, the girl grew fond of rap. After she met a young Iranian director, Sonita began to make music videos and her songs gained recognition. However, when she started realising what was happening to her, her mother gave her devastating news. She had to return to Afghanistan with her mother: a man there wanted to marry Sonita in exchange of 9,000 dollars and her family needed this money to pay for her brother’s marriage.

At that point, Sonita protested as best as she could: she wrote the song Brides for sale.

Let me whisper, so no one hears that I speak of selling girls. My voice shouldn’t be heard since it’s against Sharia. Women must remain silent… this is our tradition.

In the video Sonita begs her family not to sell her off; she wears a bride gown, her face is covered with bruises and on her forehead there is a bar code.

The young rapper was talked about a lot, mainly in her native land. And it all started there: NoorJahan Akbar of WLUML (Women Living Under Muslim Laws), an association headquartered in Kabul, sent Sonita’s video to her Indonesian colleague Elie Calhoun. Elie posted it on Facebook and here Cori Stern, co-founder of The Strongheart group – an American project aimed to help the young ambassadors for change to make their voice heard – saw it.

Since then, thanks to the attention around Sonita’s music, Mr. Loftin of the Wasatch Center awarded her a scholarship in his school; Laurie Michaels, supporter of Strongheart, started believing in the teenager’s potential and helped her to continue her studies. 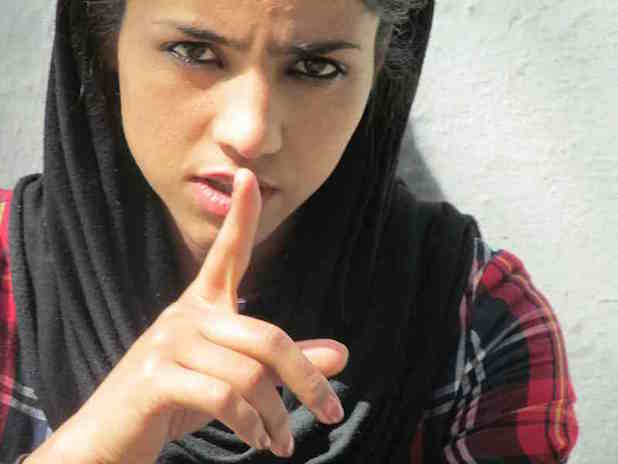 Sonita’s extraordinary story was even documented in a film: Sonita is a traveling swallow by the Iranian director Rokhsareh Ghaemmaghami, which will be released next autumn.

Rap was the first channel through which Sonita tried to raise awareness on teen and arranged marriages. In an interview appeared in pri.org she affirms:

Rap music let’s you tell your story to other people. Rap music is a platform to share the words that are in my heart.

Sonita Alizadeh is a force to be reckoned with. She is a powerful voice for the right of girls and women to choose their own destiny (…). Her music became a rallying cry for many girls across Afghanistan.

And this is true: although since 2009 in Afghanistan there has been issued a (not yet ratified) presidential decree on the elimination of violence against women that forbids arranged marriages, this phenomenon is not unheard of nowadays and the tradition of selling girls to resolve family disputes or to get money is still deeply-rooted.