Renewables surged in 2015, with 8.3 per cent extra production capacity

2015 was a record year for renewable energies. A surge in installed plants all over the world has in fact allowed increasing the production capacity by 152 GW, registering an increase of 8.3 per cent: an unprecedented figure achieved over 12 months only.

Renewables are on the rise despite low-cost oil

Data has been released by the International Renewable Energy Agency (IRENA), in a report showing that the total installed capacity on a global level amounted to 1,985 GW at the end of 2015. “Renewable energy deployment continues to surge in markets around the globe, even in an era of low oil and gas prices,” said IRENA Director-General Adnan Z. Amin. “This impressive growth, coupled with a record $286 billion invested in renewables in 2015, sends a strong signal to investors and policymakers that renewable energy is now the preferred option for new power generation capacity around the world.” 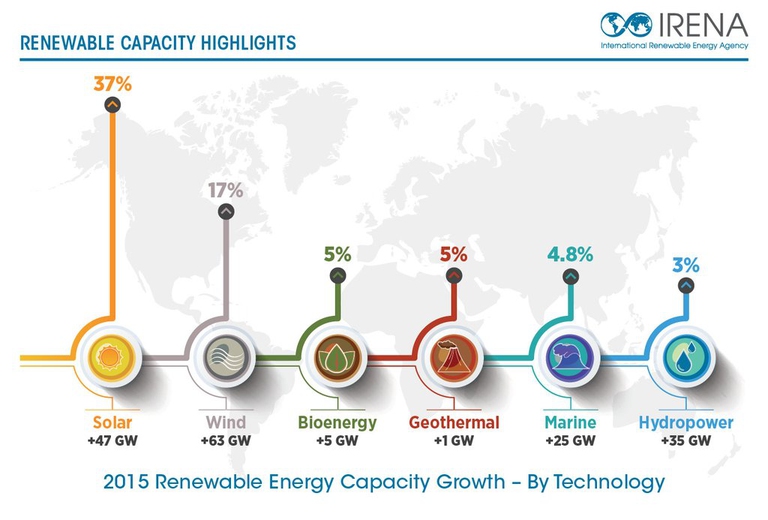 Solar energy leads the way (+37 per cent), followed by wind energy with an increase in its production capacity by 17 per cent, geothermal energy (+5 per cent) and hydroelectric power (+3 per cent). Hydroelectric energy, though, continue being the main renewable source, representing 61 per cent of the total.

In terms of regional power generation, the most dynamic regions in 2015 were Central America and the Caribbean, where growth peaked to 14.5 per cent, followed by Asia (+12.4 per cent), North America (+6.3 per cent) and Europe (+5.2 per cent). “Significant rates registered in developing economies confirm that not only are renewable energies a solution for developed countries, but for all nations,” ended Amin.

According to IRENA, such trend has been favoured by decreased installation prices: for instance, the average cost of wind turbines has dropped by 45 per cent compared to 2010.