The queen of reggae Rita Marley: a living legend

Rita Marley, widow of the reggae prophet Bob, will receive the Living Legends and African Women of Excellence Awards, for her social and political commitment in Africa.

Alpharita Costancia Anderson – or simply Rita Marley – widow of the reggae prophet Bob Marley, will be assigned the Living Legends Award and African Women of Excellence Awards (AWEA). During a ceremony that will take place in New York on 12 September, the reggae queen will receive this very important award from the United Nations’ Women and the African Union Diaspora Africa Forum (AUDAF).

Rita married Bob Marley in 1966 and stayed close to him until his death. However, her career as a singer began much before she met Bob, rather it was its origin. After the death of her husband, happened in 1981, Rita continued to sing and her persevering efforts in the arts field led her to establish her own publishing company and a recording studio in Accra, capital of Ghana, where she currently lives.

Beside pursuing her artistic career, the reggae queen started to commit herself in solidarity projects in Africa, founding two organisations: the Bob Marley Foundation, to uplift her husband’s music and memories through a number of events including Bob Marley’s annual birthday party in Jamaica and the Rita Marley Foundation, that operates in Ghana and Jamaica to fight poverty, hunger and inequality in the developing countries. 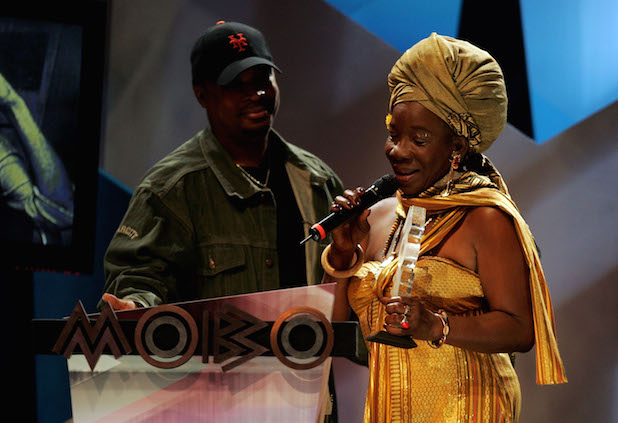 Her efforts to support the poor in Africa started during a tour in Ghana: Rita decided to set up the foundation after seeing how the people of some countries in this continent survive in extreme poverty. In a small village in western Ghana, Rita also received the honorary title of Queen Mother: there, thanks to the help of some Jamaican physicians, she created a healthcare project for children and the prevention of the spread of HIV. There are plenty of projects completed by the foundation from 2006 up to now in the whole African territory.

According to Erieka Bennett, head of the African Union Diaspora Africa Forum, Marley was selected for her extraordinary contribution to music, enterprise, political and social activism: an ideal choice to recognise African women and women of African origin their contribution to stand up for political, social and economic independence.

Rita Marley affirmed that she was surprised to receive this award. She said to the Jamaica Observer:

I was not expecting this award. I know I’ve done hard work, to God be the glory (…) I am honored to be counted amongst so many distinguished women who have previously received this award. I pray that I can continue helping to ensure that the aged are protected and that infants are cared for… according to our creed.