Peru, yet another oil spill is putting the Amazon at risk

Crude contaminates the Aguarico 4 oil pit, an open pool abandoned by Texaco after 6 years of production and never remediated.
,
by Lorenzo Brenna

Oil spills in the Amazon are nothing new. Another pipeline has broken in the Loreto region of Peru, threatening local communities’ health and the environment.

Oil spills in the Amazon are nothing new. After the latest disaster in February, a new oil spill is bringing Peru to its knees, threatening the very survival of local communities and the extraordinary ecosystem of the Amazon rainforest.

The Amazon is turning black

During the night of the 24th of June, oil started to spill from a pipeline owned by Peru’s state-run oil company Petroperu, which carries crude oil from the north of the country through the Andes to the Pacific coast. The accident took place in the Loreto region, in the Peruvian Amazon, which is one of the planet’s richest biodiversity hotspots.

The damages of the oil spill

The pipeline was 40 years old and gave place to the third major oil spill since January 2016. The effects of this environmental disaster are still unclear. According to Petroperu, there aren’t severe consequences on the Marañón River, one of the major tributaries of the Amazon River. On the other hand, however, a local indigenous organisation claims that oil has already had a heavy impact on the coastal communities of Bagazán and Angamos and compromised their water supply. 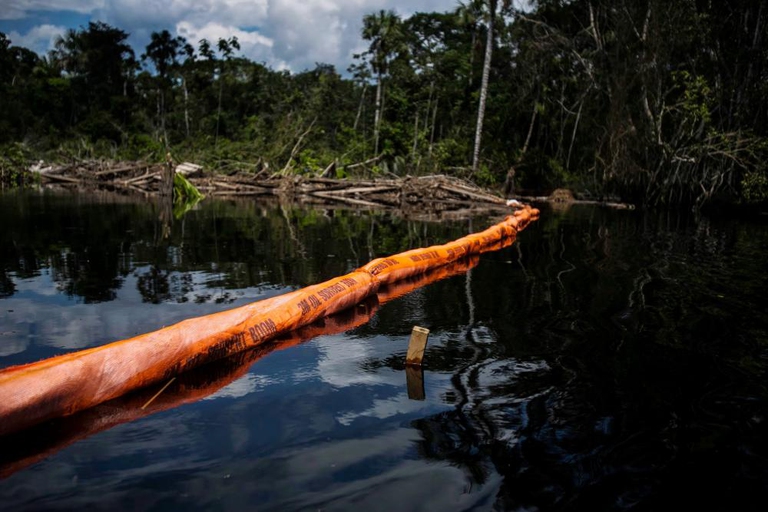 The members of local communities detected the oil spill first, and alerted authorities right away. The workers of Petroperu tried to contain the black tide by using makeshift barriers made of leaves and branches, according to a preliminary report of the Loreto Regional Health Office. “Countermeasures didn’t work properly, as oil continued to spill affecting the lowest areas,” the report reads.

The community of Barranca, which is the closest to the location of the accident, is the most affected. The community counts about 725 people, which are currently lacking basic services including drinking water and electricity. If oil reached the Barranca Caño creek, the main source of water for the community, the situation could get even worse.

The river becomes a threat

Watercourses on which Peruvian communities depend could start posing risks. Those who drank the water of the river are facing poisoning and rain water is the only solution available. In order to face the sanitary emergency, the government and Petroperu are providing drinking water and foodstuffs to the communities. However, nobody knows yet what is going to happen once aids have ended and which are the long-term consequences on the environment and human health.