Marco Rubio. We won’t destroy our economy to protect the environment

Senator for Florida and son of Cuban refugees, Marco Rubio, 44, has been living in the United States since 1956, when – two and a half years before Castro’s revolution – his family left the Caribbean island to settle in Miami. Married and father of four, he has long been considered the Republican Party’s enfant prodige: Florida’s Governor from 1999 to 2007, he was appointed Speaker of the US House of Representatives in 2006 at the age of 35.

While Donald Trump enchants Americans with his frank and relentless parlance, Marco Rubio is the exact opposite. Measured and polite, his manners are appreciated among the moderate conservative electorate. In particular, the Latino candidate seems to embody the American dream: the possibility of succeeding, through hard work, even if of humble origins. The rhetoric echoes that of Ronald Reagan in the 1980s, which strikes a chord in deep in the psyche of Republican voters.

Rubio is thus considered to be the only candidate who would be able to defeat Democrats at the presidential elections. His range of voters goes from those of the opposing camp to the most extreme elements of the Tea Party movement. And he will probably get the votes of those who backed Jeb Bush, George W.’s brother, who announced the suspension of his campaign.

The Paris attacks are part of God’s plan

His programme can be defined as “traditionalist”. With regards to the economy he trusts in the “old dogmas” of liberism: lower taxes and austerity. He plans to cut expenses linked to Social Security, Medicare and the Affordable Care Act (namely ObamaCare, incumbent Barack Obama’s healthcare reform). In other words, Marco Rubio believes that the state must be peeled back and social protection eased. Citizens, in turn, have to knuckle down: the Republican candidate supports raising the age of retirement over the age of 65. 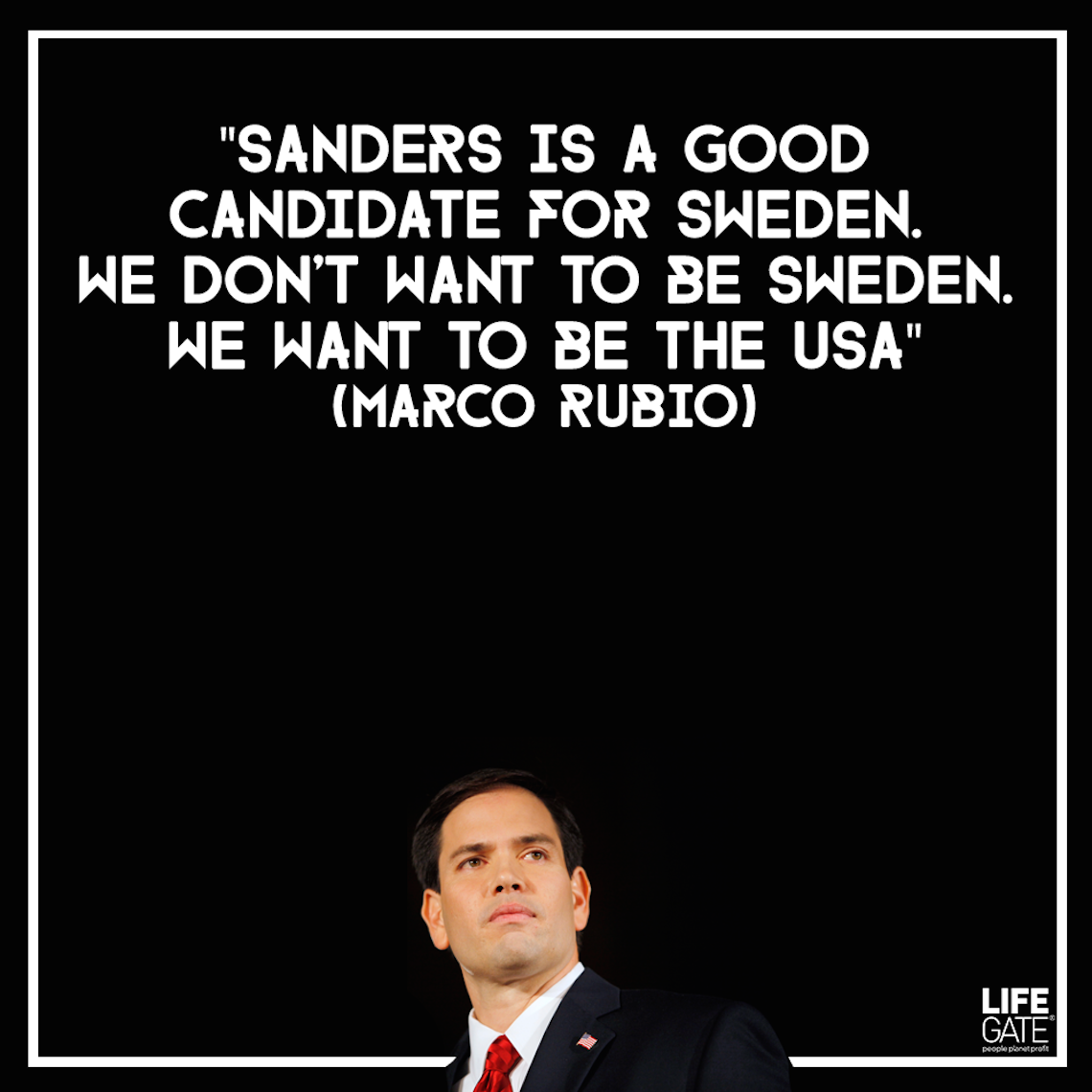 Although he’s the son of exiles, his stance on immigration is one of the most intransigent: he declared he wants to introduce stricter controls at the borders and end amnesty laws for long-term immigrants. As for ISIS and Syria, Rubio presented his “plan to defeat terrorists” in November, which includes the deployment of ground troops and no-fly zones. He has talked about the Paris attacks as a “divine warning”, essential to remind us that we are embroiled in a clash of civilizations with radical Islam.

From a Republican point of view, what is also “traditional” is his refusal of Obama’s plan on gun control. He is in favour of the TTIP, a trade agreement being negotiated between the European Union and the United States, and a similar partnership between Pacific countries. As far as civil rights are concerned, Rubio claimed he has a plan to make gay marriage illegal again in all states, because he doesn’t “think the current Constitution gives the federal government the power to regulate marriage”.

As for the environment, Marco Rubio’s stance differs only in part from that of Donald Trump, who said he doesn’t believe in climate change: “I do not believe that we have to destroy our economy in order to protect our environment,” Rubio said. Moreover, the energy plan he proposes seems to be fairly vague. It includes “policies that expand access to oil, gas, and coal development can also expand access to the development of wind, solar, nuclear, and hydropower energy”. To not step on anyone toes.

Donald Trump wins the US elections. He is the 45th President of the United States

Defying all predictions, Donald Trump has won the American elections. He is to become the 45th President of the United States.