Berta Cáceres has been murdered. Who was the activist fighting for Honduran indigenous rights

Berta Caceres stands at the Gualcarque River in the Rio Blanco region of western Honduras where she, COPINH (the Council of Popular and Indigenous Organizations of Honduras) and the people of Rio Blanco have maintained a two year struggle to halt construction on the Agua Zarca Hydroelectric project, that poses grave threats to local environment, river and indigenous Lenca people from the region.
,
by Lorenzo Brenna

Forests Activism Gender
Berta Caceres stands at the Gualcarque River in the Rio Blanco region of western Honduras where she, COPINH (the Council of Popular and Indigenous Organizations of Honduras) and the people of Rio Blanco have maintained a two year struggle to halt construction on the Agua Zarca Hydroelectric project, that poses grave threats to local environment, river and indigenous Lenca people from the region.

Berta Cáceres, leader of the Council of Indigenous and Popular Organizations of Honduras (COPINH) who has been fighting for protecting the rights of her community and lands from deforestation and exploitation for many years, has been murdered. She was shot in her residence in La Speranza, 200 kilometres from the capital Tegucigalpa, during the night between 2 and 3 March. Assailants waited for her to go to bed and burst into the house to kill her. 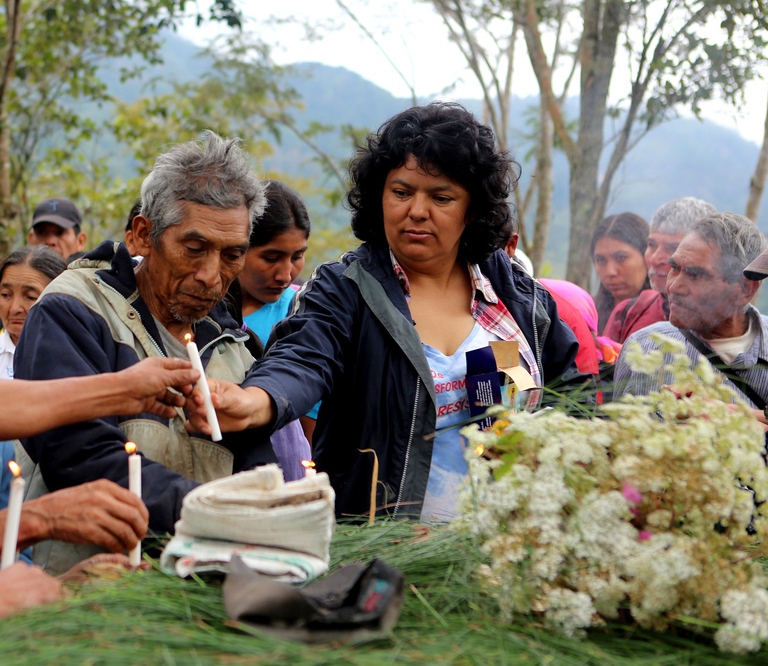 The official reasons of the murder are still unclear. Police mentioned an attempted robbery, but Berta’s mother has no doubt, “she has been killed because of her struggle, I am sure of that. I hold the government responsible”.

Cáceres, due to her brave opposition to the exploitation of resources and local populations, has been threatened many times before. She was considered a troublesome figure, even by the Honduran government that accused her of terrorism, arrested her and prosecuted her juridically.

Thanks to her determination and the love for her land, Berta Cáceres managed to oppose the realisation of one of Central America’s biggest hydropower projects, Agua Zarca, on Rio Gualcarque, Northern-western Honduras. The dam would have destroyed the ecosystem and threatened the Rio Blanco community, composed of about 600 families living in the rainforest between Santa Barbara and Intibucà. The exploitation of the river, considered to be sacred by the Lencas’ cosmology, was authorised by violating the Indigenous and Tribal Peoples Convention, 1989.

Leading the native community, Cáceres started a peace protest lasted over a year, obstructing the access to the construction site and resisting to clearance, aggressions, detentions and abuse of power. The case achieved international fame thanks to her. She appealed to the International Finance Corporation (IFC), financing institution of the World Bank, and brought it before the European Court in Strasbourg and to the Vatican.

However, the price for safeguarding the river has been too high for the indigenous community: three members were killed in unclear circumstances. “When we started the fight for Rio Blanco I could feel what the river was telling me. I knew it was going to be difficult. But I also knew we were going to triumph, because the river told me so.”

In 2015, Cáceres was awarded the Goldman Environmental Prize, the highest award that honours activists committed to safeguarding the environment – often putting their own life at risk – since 1990, for her social and environmental struggles. Berta Cáceres had many times showed her concern about the number of activists killed. According to the NGO Global Witness, Honduras is the most dangerous country for environmental activists. In fact, 101 people were killed between 2010 and 2014, making Honduras the country with the highest number of environmental murders per capita.

The death of Cáceres, reference figure for the Lenca population, left the community downhearted, which now calls for justice. About a hundred members of the COPINH marched to the public prosecutor’s office and to the police station to ask an independent international investigation. “People here are still in shock that Berta is dead,” said Karen Spring, a friend of Cáceres’. “But they are very clear that they will continue their struggle to honour her.”

Cáceres knew the risks she was facing. She even had to move her children to Argentina for security reasons. But she decided not to give up. She decided to do her bit, led by a moral obligation she couldn’t free herself from. “We must undertake the struggle in all parts of the world, wherever we may be, because we have no other spare or replacement planet,” she said. “We have only this one, and we have to take action”.