Obama decries mass shooting in Oregon. This is a political choice we make

Obama speaks after the killing of 10 people by a gunman who attacked a college in Roseburg, Oregon on the 1st of October. He’s tired of gun violence and calls for change.

Posted by Quartz on Thursday, 1 October 2015

Somehow this has become routine. The reporting is routine. My response here at this podium ends up being routine. We’ve become numb to this.

This is a political choice that we make to allow this to happen every few months in America. We collectively are answerable to those families who lose their loved ones because of our inaction.

I hope and pray that I don’t have to come out again during my tenure as President to offer my condolences to families in these circumstances. But based on my experience as President, I can’t guarantee that. And it can change.

US President Barack Obama gave an impassioned speech in response to a mass shooting that took place on the 1st of October at Umpqua Community College in Roseburg, Oregon, killing ten people. According to CNN the 26-year-old gunman was heavily armed and carrying a large amount of ammunition.

Visibly angry, Obama gave his 15th speech as President after a mass shooting. He urged the public to call for tougher gun regulations and made not so veiled criticisms of organisations that advocate for gun rights, the most influential of which is the National Rifle Association (NRA), which spent over $3 million in lobbying in 2014 alone.

This isn’t the first time Obama expresses his dismay at the issue. In July he singled out his failure to pass “common sense gun safety laws” as the greatest frustration of his presidency in a BBC interview.

Mass shooting is the United States

We spend over a trillion dollars, and pass countless laws, and devote entire agencies to preventing terrorist attacks on our soil. And yet, we have a Congress that explicitly blocks us from even collecting data on how we could potentially reduce gun deaths. How can that be?

Although there is no official definition of a “mass shooting”, the Federal Bureau of Investigation (FBI) defines a mass murder as the killing of four or more people in one event. According to Mass Shooting Tracker the mass gun attack in Oregon is the 994th in three years. In 2015 alone there have been 300 of such episodes, almost one a day.

It is estimated that there are around 300 million firearms in circulation in the US, almost one for every citizen. Globally, Americans own almost half the guns in the hands of civilians even though they make up only 5% of the world’s population.

In his July interview to the BBC Obama stated that, “if you look at the number of Americans killed since 9/11 by terrorism, it’s less than 100. If you look at the number that have been killed by gun violence, it’s in the tens of thousands”. Around 30,000 people died on average every year between 2009 and 2013 in the US as a result of gun violence according to the Brady Campaign to Prevent Gun Violence. 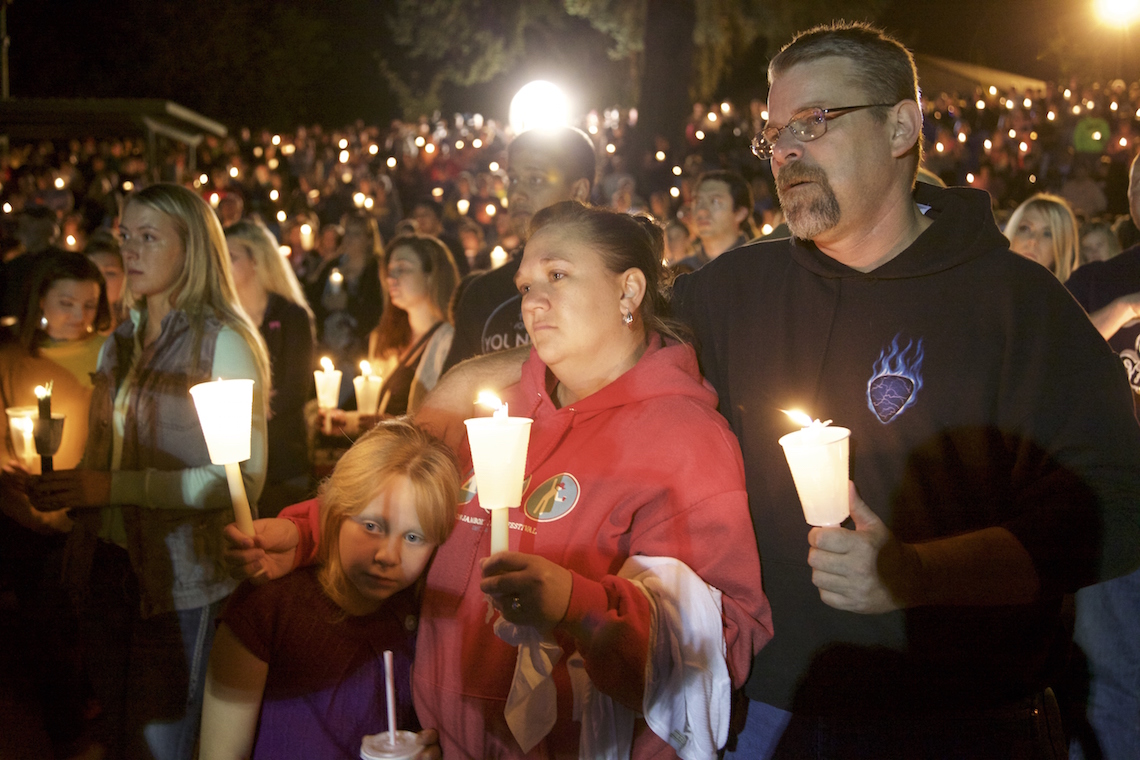 How can you, with a straight face, make the argument that more guns will make us safer?  We know that states with the most gun laws tend to have the fewest gun deaths.

The Second Amendment of the US Constitution, which enshrines “the right of the people to keep and bear Arms”, is the bedrock of the argument against reforming the country’s lax gun safety laws. Federal law, which emanates from the central government and applies to all US states, doesn’t require background checks to purchase a gun through private sale, a gun show or the internet. Oregon is one of 18 US states, out of fifty, to have passed legislation making universal background checks mandatory. However, the criteria for gun ownership aren’t particularly robust, firearms dealers aren’t regulated and there is not limit to how many guns a person can buy.

Following the 2012 mass shooting which killed twenty children and six adults at Sandy Hook Elementary School in Newtown, Connecticut, the Manchin-Toomey amendment was proposed in order to strengthen the law on background checks for purchasing firearms, strongly supported by Obama. The proposal was blocked in Senate by a coalition of Republican and some Democrats, an act described as “shameful” by the US president.

Michelle Obama, her speech for Hillary Clinton at the Democratic Convention

If Michelle Obama had made this speech before the GOP Convention, would Melania Trump have copied it? Here is what the first lady said at the Democratic Party Convention in support of Hillary Clinton and against Donald Trump.