Bertha Isabel Zúniga Cáceres, the daughter of the environmental activist killed in Honduras, tells us about her fight for the rights of indigenous people threatened by the construction of a dam.

Bertha Isabel Zúniga Cáceres is the daughter of Berta Cáceres, Honduran environmental activist committed to protecting indigenous rights and cofounder of COPINH, the Civil Council of Popular and Indigenous Organizations of Honduras. Winner of the Goldman Environmental Prize 2015 for opposing the construction of a hydroelectric dam that threatens to destroy the sacred river of the Lenca indigenous community, Berta Cáceres was murdered in March 2016. In occasion of the Festival di Internazionale in Ferrara, Italy, we spoke to Bertha Isabel. This is what she told us.

How did the project for the construction of the Agua Zarca hydroelectric dam start in the Río Blanco indigenous community, in Honduras?
Agua Zarca is only one of the numerous hydroelectric projects granted after the 2009 military coup in Honduras. When the construction company – Desarrollos Energèticos (DESA) – forced its way towards the river with tools and machinery, the Lenca indigenous community was unaware of what was happening. The project was granted without previously consulting the local community, which didn’t want a dam to be built on its lands. Moreover, the dam should be considered as unlawful because it was authorised during the coup. In 2013, the community reacted by blocking the streets in order to prevent machinery from passing. It was a devastating year, characterised by violent conflicts between the population and DESA. The latter even got the military, police and security forces involved, and affixed plates that read “private property”. This represented a form of repression towards COPINH, the Civil Council of Popular and Indigenous Organizations of Honduras, which represents the Lenca people.

What does the river represent for you and what are the social and environmental consequences of the dam?
The Agua Zarca dam would block the course of the Gualcarque River, which has a high spiritual value for the Lenca people. It is home to sacred spirits. The dam would also alter the life of the local population that depends on its water for livelihoods. Along with social consequences, the project also has a significant environmental impact. Part of the mountain has already been destroyed and many trees have been cut down along the river to make space for the roads and to transport machinery.

The company keeps saying that it’s a clean energy project. But it’s a lie because, as many other hydroelectric projects in Latin America, the energy is dirty and polluting even though fossil fuels aren’t burnt. I think that the most important aspect of the project is linked to human rights. In 2013, a leader of Río Blanco, Tomás García, was killed by an official during the riots. Other people also died in violent clashes. Then Berta Cáceres, my mother, was murdered. She had already been denounced, arrested and defined as an obstacle to development. 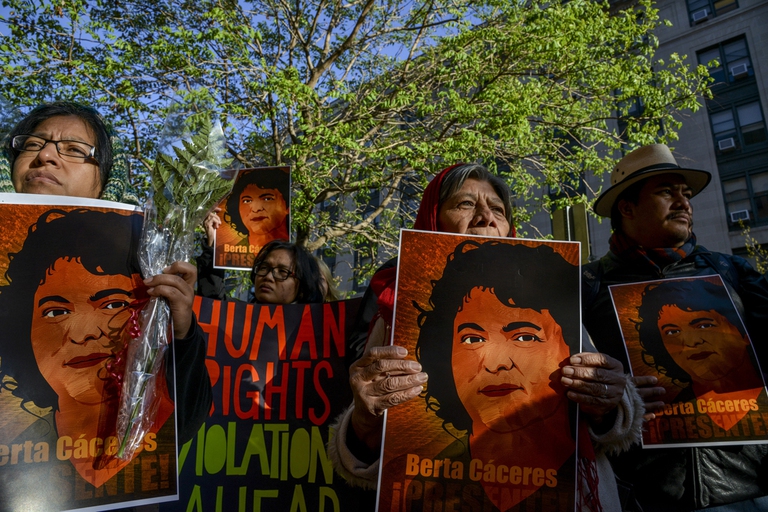 During a demonstration you held a poster that read: “Hydroelectric projects aren’t measured by KWs but by people being murdered”.
That sentence was against the bank financing the project, the Dutch Development Bank (FMO). The bank claimed that the project wasn’t big and that it would have a small environmental impact. But we wonder how such a small project – as stated by the construction company – can cause such a huge amount of deaths. So the FMO is responsible for the community’s militarisation, the killings and conflicts triggered by our opposition to the project. We don’t need their money; we just want them to go away. We don’t want all these deaths to go unnoticed due to the high rate of impunity of Honduras. People know they can kill without having any consequences and banks can take part in these killings, becoming accomplices.

You’ll carry on with your mother’s fight. Are you scared? What are your objectives for the future?
I don’t know what I’m going to do in the future, but right now I want to continue the fight for indigenous communities. I know what I’m facing. The climate of tension is clear, but fear is not the dominating feeling. Because this is precisely what they want: they want to scare us. But we can’t fight with fear. We want a fairer world and happiness for everyone and at the moment fighting is the only way to achieve great results.