Bataclan concert hall to reopen a year after the Paris attacks

On 12 November, almost a year after the Paris attacks that took place on 13 November 2015, British rocker Sting is scheduled to play at the Bataclan music venue.

The Bataclan management announced it in a statement released in the hall’s Facebook page: the historic concert hall located in the eleventh arrondissement of Paris, remembered all around the world for 13 November’s horrific terrorist attacks, will reopen in autumn and host new live concerts.

Up to today, the exact date for the venue to reopen was not yet set, but now it’s official: the first live concert will be performed on 12 November by British musician Sting.

The former frontman of the band The Police confirmed the news in his Twitter page and said:

In re-opening the Bataclan, we have two important tasks to reconcile. First, to remember and honor those who lost their lives in the attack a year ago, and second to celebrate the life and the music that this historic theater represents. 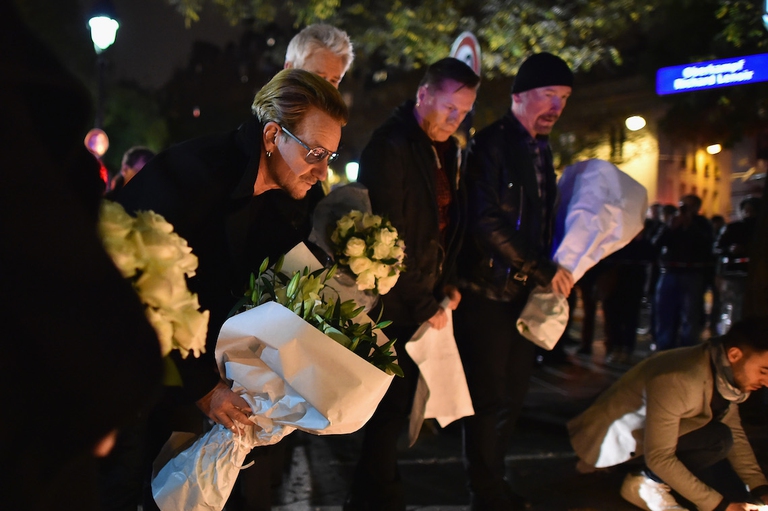 Bono and the other members of U2 lay flowers in front of the Bataclan after the terrorist attacks of 13 November © Jeff J Mitchell/Getty Images.

On Sunday 13 November, exactly a year after the terrorist attacks, a ceremony will take place in the Bataclan to commemorate the victims; the Eagles of Death Metal, the Californiana band that was performing in a concert on the night of the attacks, will attend it.

On 16 November will be Peter Doherty‘s turn. The tickets of the live concert that will be performed by the frontman of the Libertines and Babyshambles and was announced last April, sold out in few hours, so the Bataclan management added a date on 17 November.

Musicians from all over the world shared their messages of solidarity and grief after terrible Paris attacks.